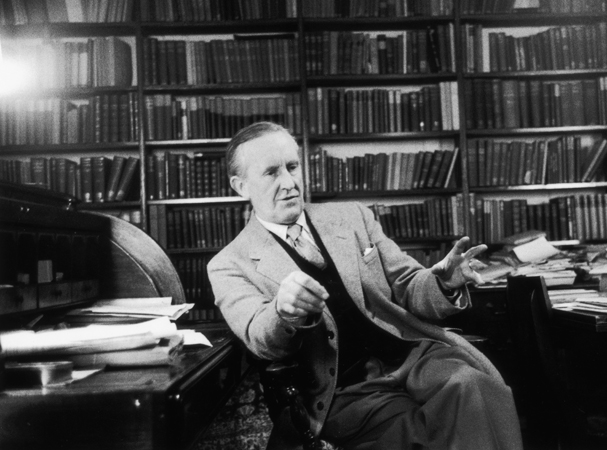 Clyde Kilby, an English professor from Wheaton College, worked with Tolkien in the summer of 1966. “Tolkien was an Old Western Man who was staggered at the present direction of civilization,” Kilby recorded after a summer of conversations with Tolkien. “Even our much vaunted talk of equality he felt debased by our attempts to ‘mechanize and formalize it.’” Like many Englishmen, he feared a world divided in two, in which the smaller peoples would be swallowed. Only some years earlier, in reaction to the Teheran Conference, Tolkien had written: “I heard of that bloodthirsty old murderer Josef Stalin inviting all nations to join a happy family of folks devoted to the abolition of tyranny and intolerance!”

One would be blind to miss Tolkien’s disgust. “I wonder (if we survive this war) if there will be any niche, even of sufferance, left for reactionary back numbers like me (and you). The bigger things get the smaller and duller or flatter the globe gets. It is getting to be one blasted little provincial suburb.” Soon, he feared, America would spread its “sanitation, morale-pep, feminism, and mass production” throughout the world.. Neither “ism”—corporate consumer capitalism or communism, both radical forms of materialism—seemed particularly attractive to Tolkien, a man who loved England (but not Great Britain!) and who loved monarchy according to medieval conventions, while hating statism in any form.

Indeed, as with St. Augustine as the barbarians tore through Rome’s gate on August 24, 410, at midnight, Tolkien looked out over a ruined world: a world on one side controlled by ideologues, and, consequently, a world of the Gulag, the Holocaust camps, the Killing Fields, and total war; on the other: a world of the pleasures of the flesh, ad-men, and the democratic conditioners to be found, especially, in bureaucracies and institutions of education. Both East and West had become dogmatically materialist, though in radically different fashions. In almost all ways, the devastation of Tolkien’s twentieth-century world was far greater than that of St. Augustine’s fifth-century world. At least barbarian man believed in something greater than himself. One could confront him as a man, a man who knew who he was and what he believed, however false that belief might be. “I sometimes wonder,” C.S. Lewis once mused, “whether we shall not have to re-convert men to real Paganism as a preliminary to converting them to Christianity.” Twentieth-century man, led by fanatic ideologies, used state-sponsored terror to murder nearly 205 million persons outside of war. War in the same century claimed another 50 million persons. Simply put, the blood ran frequently and deeply between 1914 and Tolkien’s death in 1973.

And, yet for Tolkien, one could or should rarely expect less in this world of sorrows.

After all, the War is greater than any one of us, as it rages in time, eternity, and the twilight era between; but the battle is ours, and the good women and men of every generation must claim it—but we can only do that through the mystery of Grace.

The Gospel contains a fairy-story, or a story of a larger kind which embraces all the essence of fairy-stories. They contain many marvels—peculiarly artistic, beautiful, and moving: ‘mythical’ in their perfect, self-contained significance; and among the marvels is the greatest and most complete conceivable eucatastrophe. But this story has entered History and the primary world; the desire and aspiration of sub-creation has been raised to the fulfillment of Creation. The Birth of Christ is the eucatastrophe of Man’s history. The Resurrection is the eucatastrophe of the story of the Incarnation. . . . To reject it leads either to sadness or to wrath.

Perhaps no where in his myriad of writing, did Tolkien better explain this than in a brief scene in The Lord of the Rings. Deep in Mordor, Tolkien’s mythological equivalent of an earthly hell, “Sam saw a white star twinkle for a while. The beauty of it smote his heart, as he looked up out of the forsaken land, and hope returned to him that in the end the Shadow was only a small and passing thing: there was light and high beauty forever beyond its reach.” Sam saw beauty; the beauty of the white star demonstrated for him the permanence of goodness, and he fought for the truth of the One, the One who created all things and allows us the privilege of being actors in His Story.