The Dangers of ‘Hate Speech’ Rules 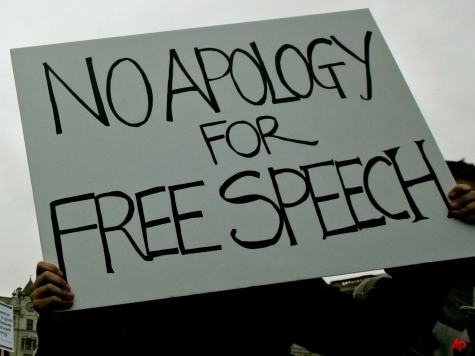 Russell Kirk argued that to engage in politics and ideas we must “draw the sword of imagination”. By that he meant, we must imagine all the ways in which a policy or an idea may do either good or harm.

Recently, Facebook, Twitter, and other social media giants announced that they will be working with the European Union (EU) to censor “hate speech”.

Under the terms of a code of conduct, the firms, which also include YouTube and Microsoft, have committed to ‘quickly and efficiently’ tackle illegal hate speech directed against anyone over issues of race, color, religion, descent or national or ethnic origin. The sites have often been used by terrorist organizations to relay messages and entice hatred against certain individuals or groups.

Among the measures agreed with the EU’s executive arm, the firms have said they will establish internal procedures and staff training to guarantee that a majority of illegal content is assessed and, where necessary, removed within 24 hours. They have also agreed to strengthen their partnerships with civil society organizations who often flag content that promotes incitement to violence and hateful conduct. The European Commission and the firms have also agreed to support civil society organizations to deliver ‘anti-hate campaigns.’

‘The internet is a place for free speech, not hate speech,’ said Vera Jourova, the EU commissioner responsible for justice, consumers and gender equality.

The danger in such a pronouncement is that what is free speech to one person is considered hate speech by another. Either you have free speech or you do not.

In America, we have a long history of legal debate over the term “free speech” and what the government may or may not suppress. Over time, we have kept our tradition alive while also recognizing that some speech does not qualify for protection. Things like death threats, incitements to violence, and libel aren’t covered, but overall we are quite lenient. Additionally, of course, private companies like Facebook and Twitter have every right to censor speech on their property.

Freedom of speech is a fairly easy concept to wrap one’s mind around. If a person wants to speak out on a topic that is or should be of concern to the public, he has every right to do so even if the majority of people disagree with him. But what about the term “hate speech”?

First of all, without Googling it, can you define it? Not so easily, right?

Here’s what the American Civil Liberties Union (ACLU) has to say about it:

Many universities, under pressure to respond to the concerns of those who are the objects of hate, have adopted codes or policies prohibiting speech that offends any group based on race, gender, ethnicity, religion or sexual orientation.

If you’ve drawn your sword of imagination, that definition should alarm you the most because of the word “offend”. The possibilities for abuse should be more than obvious. Under such a definition, if you say something that I don’t like, I can appeal to the authorities on the grounds that you offended me and I am, therefore, a victim of hate speech. Depending on who you are and who I am, the authorities may punish you severely for offending me. If I am a “protected class” listed in the definition, I have enormous power to censor your speech based on my emotional reaction.

At Ball State University, we find another definition of hate speech:

Hate speech consists of verbal and nonverbal expression that is used to demean, oppress, or promote violence against someone on the basis of their membership in a social or ethnic group.  Hate speech involves more than simply indicating that you dislike someone.  It also is different than simply teasing or ridiculing someone, or shouting an ugly word at them in a single moment of anger or frustration.

In many cases, hate speech is created by people who are part of a majority population.  Their messages typically are directed toward people who are part of a minority population.  The targets of hate speech are chosen just because they belong to that particular group of people.  The messages of hate also are designed to degrade or otherwise harm these targets for the same reason.

The Ball State University definition gets a lot murkier and even more open to abuse. While one may argue that it is good to stop speech that promotes violence against others, that assumes we’re working with the traditional definition of violence, something we don’t know from the description. As of late, it’s become popular to claim that hurtful or offensive words are a form of violence in and of themselves. We can see the argument manifested in a student editorial in The Harvard Crimson:

When someone calls a black person the ‘n’ word out of hatred, he or she is not expressing a new idea or outlining a valuable thought. They are committing an act of violence. Speech has great power. It can—and often does—serve as a tool to marginalize and oppress people. Laws that restrict hate speech simply seek to prevent violence against marginalized, oppressed groups in order to prevent them from becoming further marginalized and oppressed.

The student further expands upon this idea:

There are freedoms to do things, and there are freedoms from things. When our freedom to speak our mind impinges on someone’s freedom from fear, or on someone’s right to feel safe in their community, then that freedom should not stand unregulated in any group that wishes to create a safe and respectful society for its members. We cannot create a respectful learning environment at our university if students from marginalized groups feel that their administration condones acts of violence against them. University regulations against hate speech are entirely necessary for maintaining respect and dignity among the student body, and Harvard’s policies to this end are well thought-out and fair—and certainly not worthy of protest.

Making offensive speech the equivalent of physical violence is a very dangerous road to go down. In doing so, we effectively eliminate the meaning of words as well as the ability to have a tough, but logical conversation. Everything comes down to feelings and whether or not a person is in a protected class.

The idea of free speech is that you have the right to say something no matter if the majority of people are with you or against you. What happens under hate speech rules is quite the opposite. A minority, even just one person, has the power to shut down all speech that he finds offensive as long as the authorities are of a similar mind and the individual is part of a protected class.

You cannot have free speech if you have hate speech regulations. As the ACLU argues:

The First Amendment to the United States Constitution protects speech no matter how offensive its content. Speech codes adopted by government-financed state colleges and universities amount to government censorship, in violation of the Constitution. And the ACLU believes that all campuses should adhere to First Amendment principles because academic freedom is a bedrock of education in a free society.

How much we value the right of free speech is put to its severest test when the speaker is someone we disagree with most. Speech that deeply offends our morality or is hostile to our way of life warrants the same constitutional protection as other speech because the right of free speech is indivisible: When one of us is denied this right, all of us are denied. Since its founding in 1920, the ACLU has fought for the free expression of all ideas, popular or unpopular. That’s the constitutional mandate.

On this point, the ACLU is absolutely correct. The constitutional mandate is to protect all speech, not just culturally accepted speech. Furthermore, the push to control speech on college campuses and other public spaces should be met with the fiercest resistance possible.

And while Facebook and Twitter have every right to control speech on their private platforms, they should be very, very careful when censoring content as they’ve arguably put themselves out there as platforms for public discourse. If not, then we can only hope competitors to the social media giants come online soon otherwise public discourse in America and around the world will be severely restrained with the public reaction unpredictable.