Why Did Elvis Want to Be a Narc? 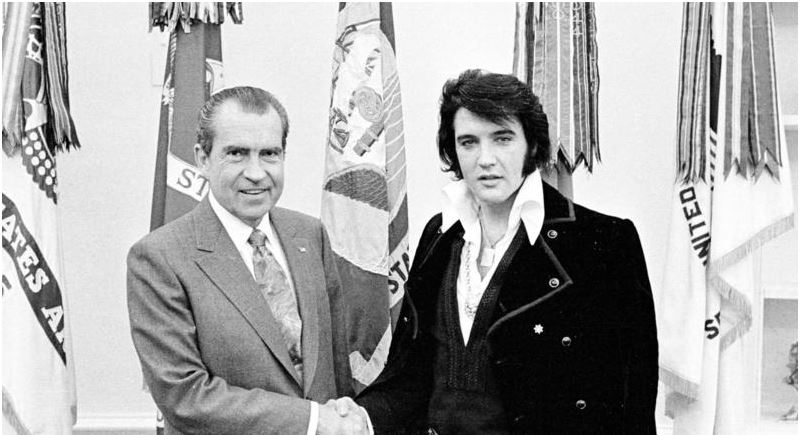 The National Archives’ most requested photo features President Nixon standing beside one of the world’s most recognizable royals: the King of Rock n’ Roll. Is it genuine history, political commentary, a Photoshop spoof? Surreal but authentic, the black-and-white image shows President Nixon, wearing a full suit, shaking the hand of Elvis Presley, wearing … exactly what you’d expect.

If you’ve been to Graceland — or you watch Comedy Central’s Drunk History — you may know about the two figures’ bizarre encounter in 1970. Now, a lighthearted film titled Elvis & Nixon is exploring the story behind the meeting and the iconic photograph. The story centers around one unusual request: Elvis wants to become an undercover federal agent-at-large.

In the film, Presley (played by Michael Shannon) flies directly to the nation’s capital. Unannounced and without appointment, he drives to the White House’s North Gate at the crack of dawn. The secret service agents are stunned. Not only is Elvis standing in front of them at six in the morning, but he wants a meeting with Nixon (played by Kevin Spacey). Elvis has outlined everything in a six-page letter he wrote by hand on the plane.

As the letter makes its way through the White House, there’s understandable confusion among the staff. Is this a hoax? Do federal agents-at-large actually exist? If so, can Elvis become one?

Elvis is able to meet President Nixon and state his case. The King of Rock n’ Roll explains that he wants the badge because he has deep concerns about America’s future. An army veteran himself, he worries about Vietnam War protests. He’s nervous about drug culture and lack of respect for the police. Elvis plans to use his celebrity to infiltrate communist youth groups and, with the help of a badge from the Bureau of Narcotics and Dangerous Drugs, bust drug users.

At least, that’s what he tells Nixon in the film.

It’s difficult to tell what Elvis really thought. In one interview, Kevin Spacey remarked that Elvis “was far more conservative than a lot of people might have expected.” That’s especially true by today’s standards. Early in the film he tells an associate not to tell a grown man “how to spend his money.” Throughout the film, we hear Elvis’s anti-communist views in lines such as, “Elvis couldn’t exist in a communist America.”

Yet, Elvis and Me, Priscilla Presley’s memoir, describes a different motivation — one we might consider far more savvy about the nature of government power. Elvis had accumulated numerous law enforcement badges from local authorities over time, but those local badges paled in comparison to the “ultimate power” of a “narc badge.”

“With the federal narcotics badge,” she wrote, Elvis believed that he “could legally enter any country both wearing guns and carrying any drugs he wished.”

The viewer watches Elvis and Nixon connect on several issues. But as Elvis departs, he privately tells his friend that he had to insult the Beatles, “but they’ll never know.” What else did Elvis say in hopes he would secure the badge?

The film is so lighthearted and humorous, it is not only difficult to tell fact from fiction regarding both Elvis’s and Nixon’s perspectives; it’s hard to know what actually transpired in the Oval Office. At a Los Angeles screening, the film’s executive producer and personal friend of Elvis, Jerry Schilling, clarified that Elvis did not actually give Nixon a karate demonstration. But, he confirmed, it was characteristic of Elvis’s personality, and Elvis had given karate demonstrations to other high-ranking officials, including the mayor of Memphis.

In any case, Elvis is portrayed as an intelligent and unpredictable renegade who is not afraid to break the rules and question authority. He travels without proper government identification. He sneaks a single firearm into the Oval Office — one the secret service missed after confiscating the many others on his person. And perhaps most rebelliously, he intentionally eats Nixon’s personal and off-limits stash of M&Ms. But in the end, Nixon still gives Elvis the badge, which you can see on display at Graceland today.

As Schilling describes the film, “It’s not ‘let’s make fun of Elvis and Nixon’; it’s ‘let’s have fun with Elvis and Nixon.’” This film isn’t perfect, but I certainly had fun watching it. Soon, you can, too, even if the film’s limited theatrical release hasn’t made it to your city. Elvis & Nixon is Amazon Studio’s first major film acquisition and should be available to stream on Amazon soon.

Lana Link is a FEE alumni board member and the VP of marketing for the Moving Picture Institute.? This article was originally published on Fee.org. Read the article here. The views expressed by the author are not necessarily endorsed by this organization and are simply provided as food for thought from Intellectual Takeout.