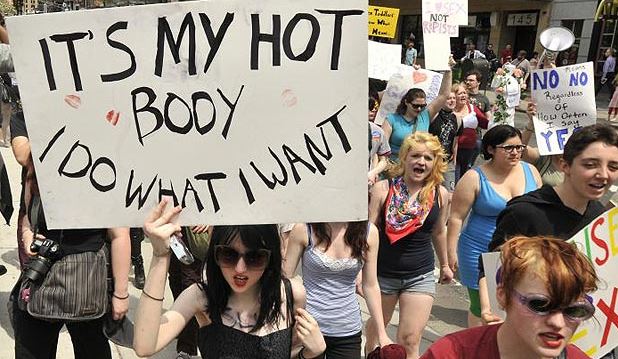 Ladies and gentlemen, mark your calendars—Amber Rose just announced she’ll be organizing yet another “SlutWalk” this fall in downtown Los Angeles. Not familiar with Amber Rose? She’s a stripper turned dancer-model-actress who was propelled to mainstream celebrity status thanks mainly to her prior disastrous relationships with Kanye West and Wiz Khalifa.

Not sure what a SlutWalk is? You’re not alone. Google the term and you’ll learn that it’s a “transnational movement of protest marches calling for an end to rape culture.” Look at pictures from Amber Rose’s SlutWalk event last year and you would be forgiven for thinking it’s an excuse for a large street party where immodestly dressed women hold up profane posters and hang out at booths that sell sex toys all within the confines of a “Judgment Free Zone.”

Spend any time on Amber Rose’s personal SlutWalk website and things get even more confusing. Beneath a large picture of herself, a “Donate Now” box, and the vague slogan, “Join the movement, make a statement,” Rose states four goals of the SlutWalk: To end sexual violence, victim blaming, derogatory labels, and gender inequality.

Since that seems like a lot of injustice to tackle all at once, Rose has evidently decided to focus most of her attention on what she views as the biggest problem facing women: the use of the word “slut.” (Although she claims that words such as “whore,” “hoe,” and “stripper” are also offensive—apparently, calling a stripper a stripper is derogatory, even though the dictionary disagrees).

But stripper isn’t the only word that confuses Amber Rose. Despite decrying the use of the world “slut,” she encourages girls who show up to her aptly-named SlutWalk to bring with them posters that say, “SLUT.” She has a clothing line of shorts and T-shirts that proudly say “slut” all over them. She and a friend even showed up to last year’s MTV Video Music Awards in matching dresses covered in the word “slut” (as well as other words she has deemed derogatory such as “gold-digger”). And her SlutWalk isn’t just any SlutWalk. It’s Amber Rose’s SlutWalk, as she’s branded the event, which is organized by something called the Amber Rose Foundation which collects donations on her behalf. For a woman who claims to hate the word “slut,” Amber Rose certainly doesn’t mind profiting from it.

And yet, for someone whose Instagram account announces, “F**k yo opinion I do what I want” (next to a cigarette emoji), Amber Rose seems to care a lot about the public’s perception of her. This makes more sense when one considers Rose’s own past experiences. She has been publicly humiliated not once, but twice, by the famous former men in her life. That includes Kanye West who once said, “It’s very hard for a woman to want to be with someone that was with Amber Rose. I had to take 30 showers before I got with Kim [Kardashian].” After separating from her ex-husband Wiz Khalifa, he released a song with the lyrics, “I fell in love with a stripper/funny thing is I fell back out of love quicker.”

Amber Rose clings to the misguided notion that if you march around in public half-naked with a “SLUT” sign, screaming at strangers to stop labeling you a slut, you deserve respect. But it’s an inescapable reality—when a woman acts like she doesn’t respect herself, she will never win the respect of men (or other women). Amber Rose and her supporters don’t need a SlutWalk. They need a little more common sense.