Lou Gehrig and the Culture of Victimhood 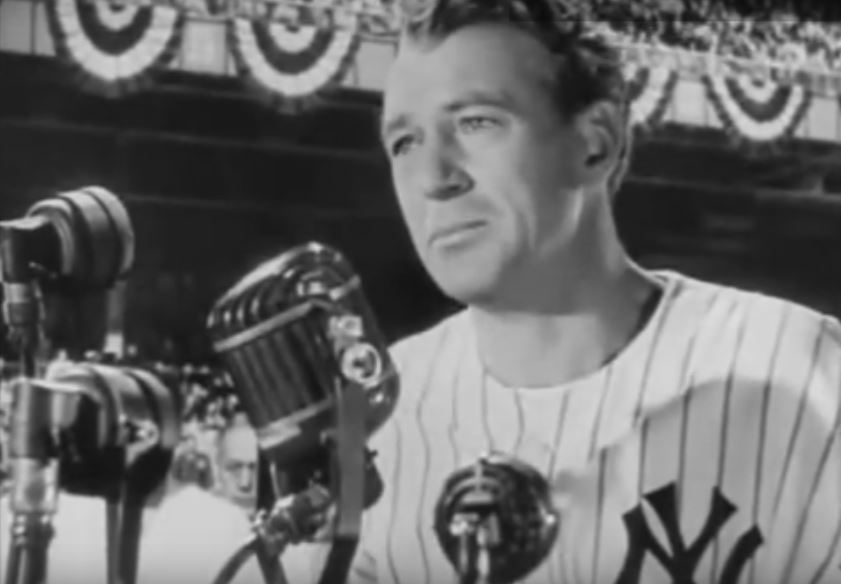 Over the weekend, I had the fun of revisiting one of my long-time favorite films, The Pride of the Yankees.

For those unfamiliar with The Pride of the Yankees, the movie portrays the life story of baseball legend Lou Gehrig, who died at the age of 37 from ALS, the disease which now bears his name. As shown in the clip below, the final scene famously depicts Gehrig’s moving farewell speech to his teammates and fans.

Since Hollywood generally puts a different spin on almost everything it gets its hands on, I decided to hunt up the transcript of the original speech Gehrig made on July 4th, 1939. Although there’s some debate on what Gehrig actually said, the commonly accepted transcript conveys the same tone and attitude presented in the movie:

“Fans, for the past two weeks you have been reading about the bad break I got. Yet today I consider myself the luckiest man on the face of this earth. …

Sure, I’m lucky. … When you have a wonderful mother-in-law who takes sides with you in squabbles with her own daughter — that’s something. When you have a father and a mother who work all their lives so you can have an education and build your body — it’s a blessing. When you have a wife who has been a tower of strength and shown more courage than you dreamed existed — that’s the finest I know.

So I close in saying that I may have had a tough break, but I have an awful lot to live for.”

In examining both the movie and real life versions of Gehrig’s speech, I couldn’t help but notice the difference between Gehrig’s attitude toward life and the common victimhood attitude today’s culture has adopted. American attitudes today tend to be along the following lines:

Gehrig, on the other hand, was widely recognized as a genuine victim. Because of a “bad break,” he was about to lose his life in his prime years. Yet instead of complaining, he expressed gratitude for all of the blessings he enjoyed, describing himself as “the luckiest man on the face of this earth.”

In an article last year for The New York Times, Arthur Brooks noted that a victimhood culture only serves to increase conflict and create worse citizens. Would we see less social discord in society if more Americans responded to their trials and complaints of every level with the attitude which Gehrig took?