Born That Way? The Evolution of Humanity, Sex, & Gender

Nothing is so senseless that some person will not profess it. To cling to the greatest absurdities, indeed, has customarily been reserved for those with higher degrees in education. But today, the common man can believe in the most ridiculous things too, for he has been convinced of his great knowledge by the self-esteem lessons he has been taught in the public schools, and he has been given a platform to pontificate, as well as an imagined, eager audience, by his  access to the internet.

Perhaps the most absurd subject of our day centers on the word “gender.” The word has been exploded to include new and ever-morphing meanings, and the confusion surrounding its true meaning is staggering. The supposed evolution of this word is another example of the commonly-held, wrong-headed notion that language evolves.

“Experts” at the University of Edinburgh have recently perpetuated this idea in stating their conclusions after conducting experiments in the evolution of language. They sophomorically assert that:

“Language, because it is culturally transmitted, is an evolutionary system in its own right. Many of the adaptive features of linguistic structure arise from this process rather than having to be encoded specifically in our genes. Of course, the human brain provides the essential scaffolding for the cultural evolution of language in the first place, but it need not specify all the details innately.”

The material reduction of the origins of language by the superimposition of evolutionary theory is dreadfully misguided. Modern consensus on the issue is diametrically opposed to the consensus of the Great Western Tradition, spanning the Ancient Greek and Hebrew civilizations through the Great Scholastic period, which held that language comes from God (or the gods) and words have fixed meanings. Evolutionary theory cannot speak to the origins or to the nature of language, and, moreover, the nature vs. nurture conundrum is a false dichotomy explaining little more than modern man’s misguided musings, based on unfounded assertions. 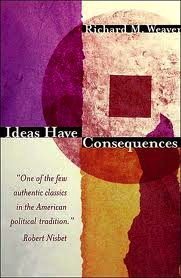 English is not evolving, but disintegrating. In Richard Weaver’s chilling critique concerning the decline of Western Civilization, Ideas Have Consequences, he identifies the train of intellectual history that led to the transition from “vere loqui” to “recte loqui,” which we may more readily identify as the transition from “speech in truth” to “politically-correct speech.” Weaver explained that since the time of Occam, logic itself was “grammaticized” or reduced, and the impact on our use of language devolved “from an ontological division by categories to a study of signification.” The initial shift in focus was to a word’s historical meaning rather than its objectively true meaning and “thus begins the assault on definition.”

In this traditional view, words are incarnations of images or meanings that correspond to an objective reality. Words are appearances of real things that have their roots in the transcendent order of truth formerly known as ultimate reality. Since Weaver’s death in 1963, there has been a precipitous decline in the proper use of language that would not have surprised him; though perhaps he would be even less hopeful today than he was in 1948 when he suggested we reinvest real value into our language.

It was in the very year of Weaver’s death that we observe the degeneration of a very good word: “gender.” It was in 1963 that “gender” took on an erotic value, and the degeneration of that word has been swift ever since. We can trace the word “gender” in its verb form at least back to the late fourteenth century. Its Old French meaning was to “engender, beget, or give birth to,” and this came from the Latin generare, which meant the same. As a noun, “gender” had meant the “kind, sort, class, species, or character.” This came from the Latin genus, which has a broader use extending to “race, stock, family, kind, rank, order, species etc.” Aristotle used the Greek genos to refer to the male and female sex. This particular use of gender as a noun denoting male and female sex is then witnessed in English from the fifteenth century.

It has always been the case that in the Romance Languages we refer to words in a grammatical sense as either masculine or feminine, and this was the understanding of gender in language until the modern age. If we inquired about the maleness or femaleness of a human person before 1963 we would ask, “what is your sex?” From the 1950s to the 1960s the answer had changed from “male” or “female” to “yes, please.” Thus, “sex” as a noun had been superseded by “sex” as a verb, and the confusion began as the sexual revolution was launched.

Though the word gender refers to what we called “sex” in the past, it no longer references male and female, but many other things, grounded not in what we are, but in what we do. The truth has always been that male and female is what we are, and “sex” relates to our complementarity as we arrange marriage, family, and communities. What we are by virtue of our natures determines the kinds of things we can and ought to do. The new gender theory, however, is grounded in an inversion of reality and begins with what people would like to do, and thus definitions of what one claims to be follow what one desires to do. This has precipitated a multitude of inventions, and we now have too many different genders to count.

To complicate matters, Sir Francis Bacon’s dictum to “conquer nature by applied science” has been aided and abetted by amazing advances in technology so that we are now capable of materially altering human persons to give the appearances of external correspondence to internal desires, no matter how perverse. Though these alterations are purely superficial, they suffice in this age of the “image” to convince us that we are in fact our own creators. The double-edged sword of the saying “born that way” has become as meaningless as the words “sex” and “gender.”

Politically-correct speech would have us falsely proclaim that a human person can be whatever gender they want, whenever they want. There is even a gender designation called “gender fluid” in which the human person can flow from one gender to another as effortlessly as water flows down a stream. One hundred years ago the claim to be “gender fluid” would have merited a straight-jacket; today it may yield international approbation and acclaim.

The plain and simple truth in speech concerning humanity, sex, and gender is that “Male and female He created them.” It is self-evident. It is obvious. It can be demonstrated scientifically by chromosomes, philosophically by the perennial tradition, and theologically by revealed truth. “Male and female He created them.” The tsunami of denial against the nature of man is impressive, and the evolutionary ethos generated by the teaching class rules this country.

We are in dire need of a recovery of truth in speech, a recovery of the true value of language. “Gender” is just the latest and most profound in a long string of misused words over the centuries, not the first or the last—but a misuse that has profound and dire consequences for modern society. Just like all the misused words, their misuse has done nothing to the ontological reality that words have a fixed meaning. Although the entire world may beg to differ, the world is wrong. It usually is.

Books on the topic of this essay may be found in The Imaginative Conservative Bookstore.