Why is it always Canada? 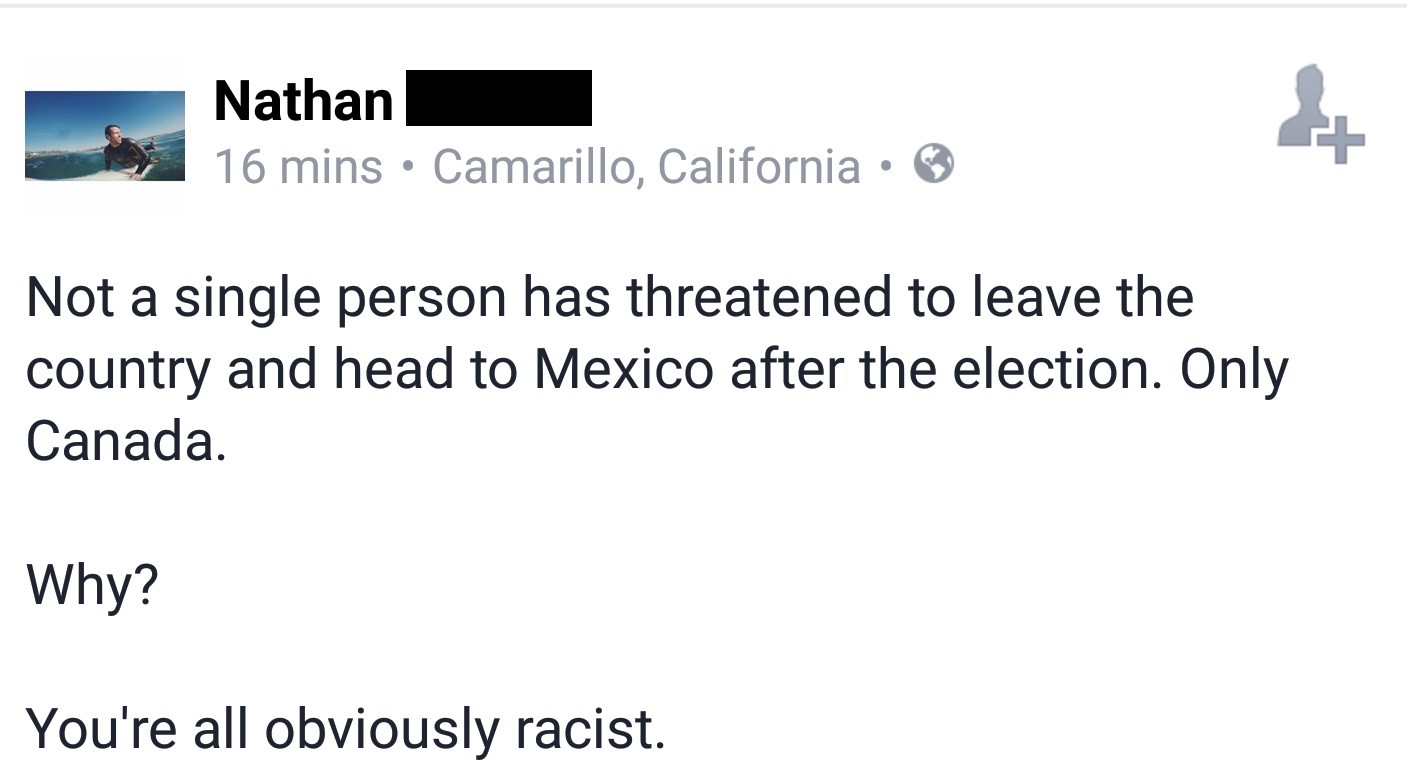 After Trump’s most recent victories in Michigan, Mississippi, and Hawaii, taking three out of the four available states, there are renewed pledges to “never vote for trump” and then, if that fails, “to move to Canada” if he wins.

Why is it always Canada?

The thought came to me unoriginally after seeing the following image floating around on social media:

Trump has been attacked as a fascist for wanting to build a wall along the southern border of the United States, advocating for the limitation of immigration from Muslim countries, and a few other things. Arguably, limiting immigration isn’t a sign of fascism, but today’s cultural orthodoxies are what they are these days.

Nonetheless, the screenshot of the Facebook post above is painfully accurate. While any number of people cry foul about Trump’s plans, why is it that they never want to go to the countries from which Trump seems to be wanting to limit immigration? Why doesn’t anyone want to live in Saudi Arabia, Iraq, Syria, Yemen, India, Mexico, Venezuela, etc.? And what does that reveal?

Let’s be honest about Canada and its roots. It, like America, Australia, New Zealand, and a few others, all grew out of the British Empire. Their laws, cultures, and traditions are a reflection (though fading quickly these days) of the white, Anglo-Saxon Protestant (WASP) beliefs upon which they were built, which themselves rested on the deeper heritage of Western civilization.

It’s odd. People who threaten to leave for Canada clearly like the culture, law, and order that they believe exists there and believe that it would be similar to what they are accustomed here in the United States. But are they willing to ask the tough questions and even act on uncomfortable answers in order to preserve it either in America or Canada?

In our modern world, we have come to believe that man is inherently good and that any evil he does is caused by societal constructs or poorly designed systems. The thinking goes that if we just get the structure and constructs of society right that things will be good and all peoples can live in harmony.

Yet, Europe’s migration mess is proving that that isn’t really the case. As do the twin disasters of America’s invasions of both Iraq and Afghanistan and the subsequent foisting of democratic, Western forms of government upon both. The ugly reality is that the history of human nature would reveal that we’re not purely good inside. Furthermore, people have cultural baggage that does not go away. When they change lands or there is a mass migration, cultural baggage can actually displace the native culture.

As is regularly pointed out, that’s what happened to the natives in both America and Canada. A large migration of peoples shifted the balance of power and the original culture was displaced, often violently. Rome had the same thing happen to it, causing it to collapse. For a while, it could assimilate the various migrant tribes and peoples coming into its lands. But after a while, that was simply not possible and Rome fell into chaos with the tribes banding together to loot, pillage, and conquer.

While it’s not currently to the same degree, there is a global migration pattern that is taken place that is seeing very large and young populations moving from non-Western cultures into rapidly aging Western countries. Which cultures will win out? The smart money is on those who are young and are having kids. And as it stands those are not peoples who share the cultural heritages that built the West and its tolerant societies that exist today.

Time will tell how things work out, but the simple truth is that if you’re picking Canada as your new home, you’re choosing a country that shares the same cultural heritage as the United States. If you want to preserve our culture and its fruit, at some point you may have to grapple with the tough realities of how to actually do so.