Why FDR was against Public Employee Unions 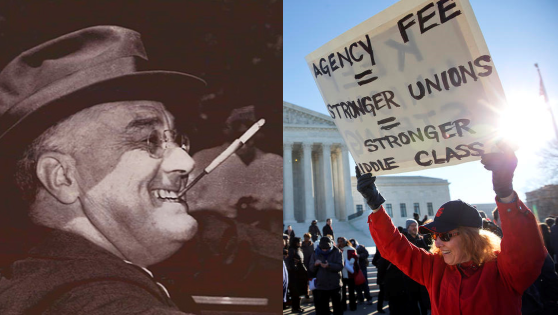 In the case Friedrichs v. California Teachers Association, the Supreme Court announced a 4-4 vote on March 29, 2016. The tie was due to the death of Justice Antonin Scalia. For teachers unions around the country it was a great victory that would have likely not happened.

Here is how The New York Times describes the decision:

“The Supreme Court handed organized labor a major victory on Tuesday, deadlocking 4 to 4 in a case that had threatened to cripple the ability of public-sector unions to collect fees from workers who chose not to join and did not want to pay for the unions’ collective bargaining activities.

It was the starkest illustration yet of how the sudden death of Justice Antonin Scalia last month has blocked the power of the court’s four remaining conservatives to move the law to the right.

A ruling allowing workers to refuse to pay the fees would have been the culmination of a decades-long campaign by a group of prominent conservative foundations aimed at weakening unions that represent teachers and other public employees. Tuesday’s deadlock denied them that victory, but it set no precedent and left the door open for further challenges once the Supreme Court is back at full strength.”

And a little more background from the same article:

“Under California law, public employees who choose not to join unions must pay a ‘fair share service fee,’ also known as an ‘agency fee,’ typically equivalent to the dues members pay. The fees, the law says, are meant to pay for some of the costs of collective bargaining, including ‘the cost of lobbying activities.’ More than 20 states have similar laws.

Government workers who are not members of unions have long been able to obtain refunds for the political activities of unions, like campaign spending. The case the court ruled on Tuesday, Friedrichs v. California Teachers Association, No. 14-915, asked whether such workers must continue to pay for any union activities, including negotiating for better wages and benefits. A majority of the justices had seemed inclined to say no.

Relying on a 1977 Supreme Court precedent, the United States Court of Appeals for the Ninth Circuit, in San Francisco, upheld the requirement that the objecting teachers pay fees. Tuesday’s announcement, saying only that ‘the judgment is affirmed by an equally divided court,’ upheld that ruling and set no new precedent.

The unions defending the compulsory fees said the teachers’ First Amendment arguments were a ruse. Collective bargaining is different from spending on behalf of a candidate, the unions said. They said the plaintiffs were seeking to reap the benefits of such bargaining without paying their fair share of the cost.”

President Franklin D. Roosevelt (FDR), a four-term progressive Democrat of the 1930s and 1940s, actually warned about that very danger in a letter he wrote in 1937 to Luther C. Steward, President of the National Federation of Federal Employees:

“The desire of Government employees for fair and adequate pay, reasonable hours of work, safe and suitable working conditions, development of opportunities for advancement, facilities for fair and impartial consideration and review of grievances, and other objectives of a proper employee relations policy, is basically no different from that of employees in private industry. Organization on their part to present their views on such matters is both natural and logical, but meticulous attention should be paid to the special relationships and obligations of public servants to the public itself and to the Government.

All Government employees should realize that the process of collective bargaining, as usually understood, cannot be transplanted into the public service. It has its distinct and insurmountable limitations when applied to public personnel management. The very nature and purposes of Government make it impossible for administrative officials to represent fully or to bind the employer in mutual discussions with Government employee organizations. The employer is the whole people, who speak by means of laws enacted by their representatives in Congress. Accordingly, administrative officials and employees alike are governed and guided, and in many instances restricted, by laws which establish policies, procedures, or rules in personnel matters.”

“Particularly, I want to emphasize my conviction that militant tactics have no place in the functions of any organization of Government employees. Upon employees in the Federal service rests the obligation to serve the whole people, whose interests and welfare require orderliness and continuity in the conduct of Government activities. This obligation is paramount. Since their own services have to do with the functioning of the Government, a strike of public employees manifests nothing less than an intent on their part to prevent or obstruct the operations of Government until their demands are satisfied. Such action, looking toward the paralysis of Government by those who have sworn to support it, is unthinkable and intolerable.”

The whole document may be read here.

Today, many would argue that what FDR warned about the inability of taxpayers to negotiate with public employee unions has actually come true. Since the Friedrichs v. California Teachers Association was a tie decision, it set no new precedents. Expect this issue to be one that is revisited by the courts and continues to be prominent in national and state discussions.