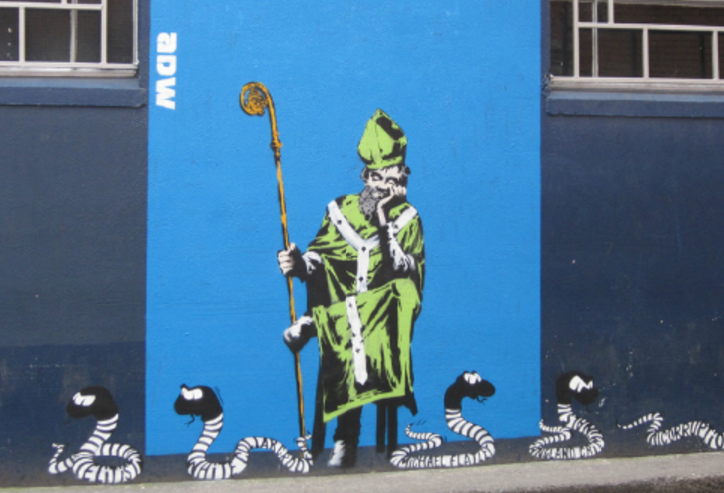 A common myth that has persisted for 1,500 years is that St. Patrick drove out the snakes of Ireland. That is simply not the case. He did do a great many of things, but that is not one of them.

A Treasury of Irish Folklore (1967) sheds some light upon a possible reason for the roots of the snake myth, why it has continued to this day, and why we must get past it to understand St. Patrick:

“What do most of us know about the apostle with the adopted Roman name whose memory has been cherished for over fifteen hundred years by Irish people? For most of us the picture of a white-bearded personage banishing a wriggling snake covers a great deal of what we know about him. Or else we see him as an open-air preacher holding up a shamrock by way of illustrating the doctrine of the Trinity. … The first image, the one that has the snake in it, requires a little more comment.

There were never any snakes in Ireland, and so our saint was under no necessity to banish them. Now the Norse word for ‘toad’ is ‘paud’; coming to Ireland they noticed there were no such creatures there. They heard of a man whose name was ‘Paudrig,’ and they thought that this name meant ‘toad-expeller,’ and out of that misunderstanding came the legend of Patrick’s banishing not only toads but snakes. Of course that helped to add veneration to his name, for the snake was the emblem of evil. And so the most popular of the stories about Ireland’s apostle has a Norse and not an Irish origin.

We have to get past both the shamrock and the snake to perceive what sort of a man the apostle really was. He was a man of great conviction, great energy, great charity; he combined great visionary power with a practical sense and a soldierly audacity; he could have been a good general and a remarkable poet. He was a saint because he loved men and loved God.”

Well, there you go. Something to tell your friends while sipping green beer.