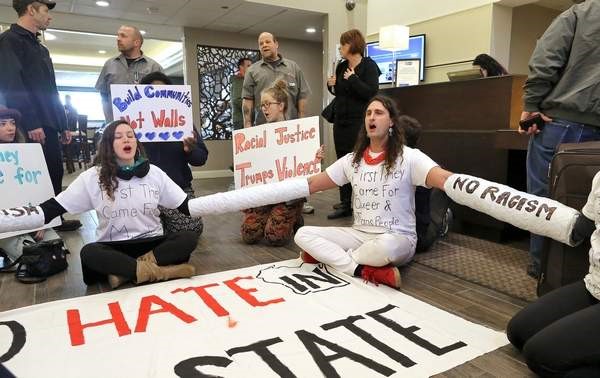 If the screenshot of the Craigslist ad is legit, then it appears people are being paid to protest Donald Trump in Janesville, WI. Whether or not you think The Donald should be protested, there’s something a bit off-putting and hollow about paid protesters.

Who exactly was behind the ad isn’t clear since it’s been pulled from Craigslist. As for the possibility of paid protesters? There’s actually evidence that it happens.

Back in 2015, The Washington Times reported:

“Hired protesters with the Black Lives Matter movement have started a #CutTheCheck hashtag and held a sit-in at the offices for the successor group to the Association of Community Organizations for Reform Now (ACORN) in Missouri after the group allegedly stopped paying them.

FrontPage Magazine reports that Missourians Organizing for Reform and Empowerment (MORE) has been paying protesters $5,000 a month to demonstrate in Ferguson. Last week, hired protesters who haven’t been paid held a sit-in at MORE’s offices and posted a demand letter online.

MORE is the re-branded Missouri branch of ACORN, which filed for bankruptcy in late 2010, FrontPage reported. MORE and other groups supporting the Black Lives Matter movement have received millions of dollars from billionaire financier George Soros.

The group Millennial Activists United posted a letter on their blog demanding MORE “cut the checks” to demonstrators.

‘Early in the movement, non-profit organization MORE, formerly known as the St. Louis chapter of ACORN, and local St. Louis organization Organization for Black Struggle created a joint account in which national donors from all over the world have donated over $150,000 to sustain the movement,’ the letter read. “Since then, the poor black [sic] of this movement who served as cash generators to bring money into St. Louis have seen little to none of that money.

‘Questions have been raised as to how the movement is to sustain when white non-profits are hoarding monies collected of off [sic] black bodies? When we will [sic] hold the industry of black suffering accountable? The people of the community are fed up and the accountability begins here and now,’ the statement said.”

And then there is this video from the 2012 Chicago Teachers Union protest:

Knowing that such things are going on certainly changes one’s perspective on protests and other similar events. While some are genuine, organic outgrowths of the people, others seem to be questionable at best.