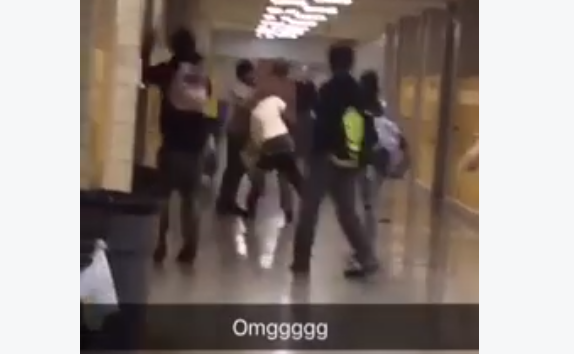 Just as Black Lives Matter succeeded in getting a teacher put on paid leave for daring to question the wisdom of teachers not having the authority to discipline students in the St. Paul Public Schools after several cases of teachers being assaulted (learn more here), another teacher is assaulted by a group of students.

This time, though, two black students were caught beating an older, white teacher on video.

Well damn, only at como.

“Mark Rawlings, identified by the Star Tribune as the teacher involved, is said to have tried to remove the two students from a classroom where they did not belong. The altercation spilled over into the hallway, where the fight’s apparent end was caught on tape.

Those consequences could also include criminal charges: The St. Paul Police Department released the students without arrest, but are treating the incident as an alleged assault on the teacher.

Rawlings was taken to Regions Hospital, though the extent of his injuries was not clear as of Wednesday. Como Park is the same school where Black Lives Matter St. Paul has called for the ouster of Theo Olson, a special needs teacher who had posted online about bad student behavior.

The activist group, and its leader Rashad Turner, said Olson’s complaints of kids ‘setting up fights, selling drugs, whoring trains’ and other misdeeds had a racial component, and that he should be fired for his Facebook activity.”

By no means is this the first account of a teacher being assaulted. Earlier in the school year a teacher in St. Paul Public Schools suffered a traumatic brain injury after being “slammed against a wall, put in a stranglehold, and then thrown into a table and the floor.”

The inability of teachers and administrators to discipline students is now one of the key issues in the controversy about the exponential growth in violence in the schools.

If you’ve read the Little House on the Prairie series, you might recall that violence in the schools happened even back then as you find a fascinating account in Farmer Boy of students wanting to beat up a teacher and maybe even kill him. The big difference between then and now was how the teacher (and the school board) thought the issue should be dealt with. Without giving too much away, a blacksnake ox-whip plays prominently.

“When Royal and Almanzo reached home that night, they told Father. Almanzo said it wasn’t fair. Mr. Corse wasn’t big enough to fight even one of those big boys, and they would all jump on him at once.

‘Son, Mr. Corse hired out to teach the school,’ Father answered. ‘The school trustees were fair and aboveboard with him; they told him what he was undertaking. He undertook it. It’s his job, not yours.’

‘That’s his business,’ said Father. ‘When a man undertakes a job, he has to stick to it till he finishes it. If Corse is the man I think he is, he’d thank nobody for interfering.’

Almanzo couldn’t help saying again: ‘It isn’t fair. He can’t fight all five of them.’

‘I wouldn’t wonder if you’d be surprised, son,’ Father said. ‘Now you boys get a hustle…’

The room was still. Everybody was waiting. The big boys came up the path and clattered into the entry, hooting and jostling one another. The door banged open, and Big Bill Ritchie swaggered in. The other big boys were behind him.

Mr. Corse looked at them and did not say anything. Bill Ritchie laughed in his face, and still he did not speak. The big boys jostled Bill, and he jeered again at Mr. Corse. Then he led them all tramping loudly down the aisle to their seats.

Mr. Corse lifted the lid of his desk and dropped on hand out of sight behind the raised lid. He said:

Big Bill jumped up and tore off his coat, yelling:

‘Come on, boys!’ He rushed up the aisle. Almanzo felt sick inside; he didn’t want to watch, but he couldn’t help it.

Mr. Corse stepped away from his desk. His hand came from behind the desk lid, and a long, thin, black streak hissed through the air.

It was a blacksnake ox-whip fifteen feet long. Mr. Corse held the short handle, loaded with iron, that could kill an ox. The thin, long lash coiled around Bill’s legs, and Mr. Corse jerked. Bill lurched and almost fell. Quick as black lightning the lash circled and stuck and coiled again, and again Mr. Corse jerked.

‘Come up here, Bill Ritchie,’ he said, jerking Bill toward him, and backing away.

Bill could not reach him. Faster and faster the lash was hissing and crackling, coiling and jerking, and more and more quickly Mr. Corse backed away, jerking Bill almost off his feet. Up and down they went in the open space in front of the desk. The lash kept coiling and tripping Bill, Mr. Corse kept running backward and striking.

Bill’s trousers were cut through, his shirt was slashed, his arms bleeding from the bite of the lash. It came and went, hissing, too fast to be seen. Bill rushed, and the floor shook when the whiplash jerked him over backward. He got up swearing and tried to reach the teacher’s chair, to throw it. The lash jerked him around. He began to bawl like a calf. He blubbered and begged.

The lash kept on hissing, circling, jerking. Bit by bit it jerked Bill to the door. Mr. Corse threw him headlong into the entry and slammed and locked the door. Turning quickly, he said:

John was in the aisle, staring. He whirled around and tried to get away, but Mr. Corse took a quick step, caught him with the whiplash and jerked him forward.

‘Oh, please, please, please, Teacher!’ John begged. Mr. Corse did not answer. He was panting and sweat trickled down his cheek. The whiplash was coiling and hissing, jerking John to the door. Mr. Corse threw him out and slammed the door, and turned.

The other big boys had got the window open. One, two, three, they jumped out into the deep snow and floundered away.

Mr. Corse coiled the whip neatly and laid it in his desk. He wiped his face with his handkerchief, straightened his collar, and said:

‘Royal, will you please close the window?’

Royal tiptoed to the window and shut it. Then Mr. Corse called the arithmetic class. Nobody knew the lesson. And there was no recess that afternoon. Everybody had forgotten it.

Almanzo could hardly wait till school was dismissed and he could rush out with the other boys and yell. The big boys were licked! Mr. Corse had licked Bill Ritchie’s gang from Hardscrabble Settlement!

But Almanzo did not know the best of it till he listened to his father talking to Mr. Corse that night at supper.

‘The boys didn’t throw you out, Royal tells me,’ Father said.

‘No,’ said Mr. Corse. ‘Thanks to your blacksnake whip.’

Almanzo stopped eating. He sat and looked at Father. Father had known, all the time. It was Father’s blacksnake whip that had bested Big Bill Ritchie. Almanzo was sure that Father was the smartest man in the world, as well as the biggest and strongest.

Father was talking. He said that while the big boys were riding on Mr. Ritchie’s bobsled they had told Mr. Ritchie that they were going to thrash the teacher that afternoon. Mr. Ritchie thought it was a good joke. He was so sure the boys would do it that he told everyone in town they had done it, and on his way home he had stopped to tell Father that Bill had thrashed Mr. Corse and broken up the school again.

Almanzo thought how surprised Mr. Ritchie must have been when he got home and saw Bill.”

They must not have had lawyers back in the day. Can you imagine the stir if a teacher properly defended himself these days?

While we may not be comfortable with the idea of a teacher whipping hostile students, we should be deeply troubled by the crippling inability to discipline out-of-control students.