Husband and wife split the chores? Divorce is more likely. 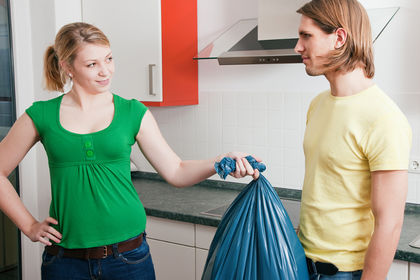 A while back, Medical Daily reported on a Norwegian study of couples to see “how married and cohabiting men and women divided housework and childcare throughout various life stages.” It might make a few heads explode.

“Couples may be better off living in a ‘traditional’ household where women do all the housework if they want to stay together, according to a report from the Oslo and Akershus University College of Applied Science.”

The reason why the study came to that conclusion is up for debate, though.

“Researchers did not find an association between a traditional share of housework (women do most of the work) and a lower risk of divorce — but they did report untraditional couples had a greater risk for divorce. Men who did as much or more of the housework were more likely to get divorced than couples where the woman did most of the housework over a period of four years.

‘The more a man does in the home, the higher the divorce rate,’ said Thomas Hansen, co-author of the study entitled ‘Gender Equality At Home,’ according to AFP. While researchers found no or very little cause-and-effect, they believe that the observation could be due to ‘modern’ attitudes.

‘Modern couples are just that, both in the way they divide up the chores and in their perception of marriage as being less sacred,’ Hansen said, stressing it was all about values. ‘In these modern couples, women also have a high level of education and a well-paid job, which makes them less dependent on their spouse financially. They can manage much easier if they divorce.’

Researchers said sharing equal responsibility for domestic chores doesn’t necessarily contribute to contentment, and that the lack of equality at home and quality of life was surprising. ‘One would think that break-ups would occur more often in families with less equality at home, but our statistics show the opposite,’ Hansen said.

He said that the correlation could be because couples are happier when they have clearly-defined roles in the relationship where people aren’t stepping on each other’s toes. ‘There could be less quarrels, since you can easily get into squabbles if both have the same roles and one has the feeling that the other is not pulling his or her own weight,’ he added.”

Interestingly, both hypotheses rely on the idea of a social construct, one “traditional” and the other “modern”. But what if there’s a third hypothesis that some of the challenge is rooted in biology and that the “traditional” arrangement has been developed over time as a reflection of what societies have come to learn as “best practices”?

Whatever the case, it’s an interesting report and it may reveal more about what’s necessary to maintain a strong marriage than many modern men and women are comfortable hearing.