Can a Christian build a wall? 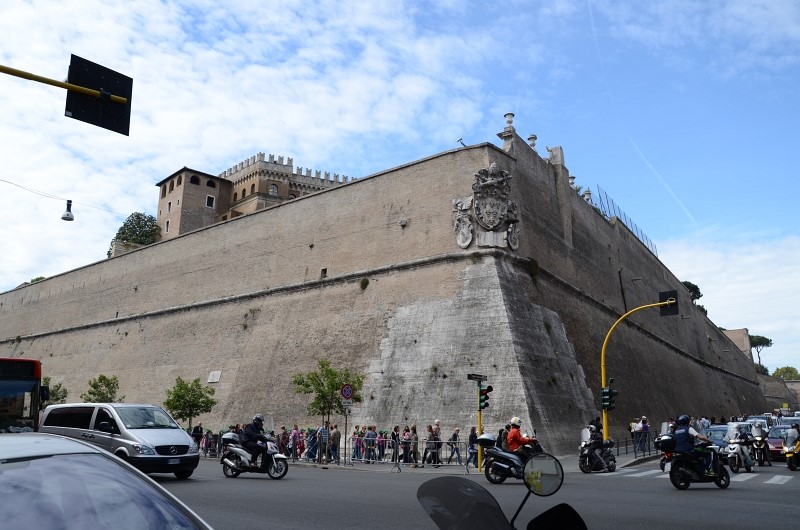 From CNN, we learn that Pope Francis jumped into American politics with a comment about Donald Trump and building walls:

“But Francis left little doubt where he stood on the polarizing issue of immigration reform.

‘A person who thinks only about building walls, wherever they may be, and not building bridges, is not Christian. This is not the gospel,’ the Pope told journalists who asked his opinion on Trump’s proposals to halt illegal immigration.”

As any number of commentators have pointed out, the Vatican itself is surrounded by a massive wall and has some of the most restrictive immigration rules in the world. They make a legitimate point.

Here’s a picture of the wall around the Vatican if you’re not familiar with it:

“…after the Saracen sack of St. Peter’s in 846 in order to protect from further attack the basilica and the complex of churches and hostels that had grown up around it.”

Right. One might wonder why Pope Leo IV was more interested in building a wall than building bridges to the Saracens. Perhaps it was because the Catholic Church actually has a long history of doing both. Since becoming the major religion of the Roman Empire and playing a major role in holding the West together and then rebuilding it through the Dark Ages and into the Middle Ages, it always recognized that it can’t build bridges if its home base is utterly destroyed. Yes, missionaries are to go out into the world, but they need a place to be formed and trained first.

For those who are not familiar with who the Saracens were, they were Muslims. As for the attack, it was specifically aimed at the Basilicas of St. Peter and St. Paul. More on the assault:

“…the assault was not directed against the city of Rome itself, but against its two wealthy churches, the Basilicas of St Peter and St Paul. The pillage must be understood in the larger context of Arab maritime raiding expeditions that occurred in the Early Middle Ages, and it serves as an excellent example of the type of raiding warfare, ghazw, of which the Arabs had a long history.”

Yes, a wall might be desired to keep raiders out. The irony of it being built because of Muslim raiders shouldn’t be lost on anyone. Here’s the outline of the wall around St. Peter’s and the Vatican:

Was Pope Leo IV then not a Christian because he was more interested in keeping the Saracens from invading St. Peter’s? Well, the question is even more complicated because it wasn’t just one pope who built walls or relied upon them.

Pope Gregory VII actually found that he had to flee behind the walls when a disagreement over who could name bishops resulted in Emperor Henry IV marching an army in 1083 to remove the pope from his office. The walls would have saved Pope Gregory VII had it not been for the treachery of his own people:

“The Eternal City was finally captured in March 1084, when the Romans, including many cardinals and other clergy, opened the gates to Henry and his army. They had deserted the papal cause in response to Gregory’s inflexibility. Wibert was enthroned as antipope Clement III, and Henry IV was crowned emperor. Gregory VII had at first sought refuge in the Castel Sant’ Angelo but in July fled with his Norman liberators to Salerno, where he died on May 25, 1085.”

So, can Christians build walls? Arguably, yes. But who are we to judge?