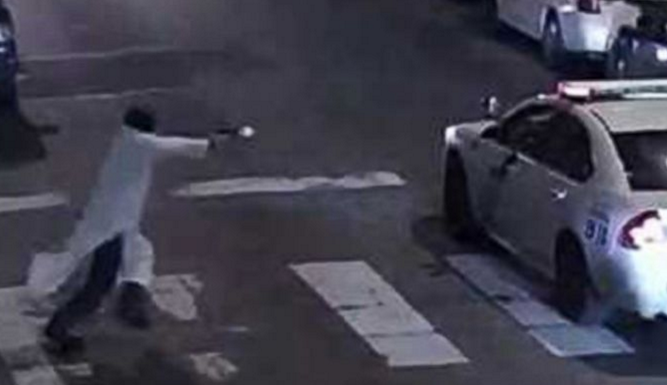 On the same night that President Obama held a televised, town hall meeting on gun control, a man shot a police officer in the name of Islam with a stolen police gun.

“A gunman claiming to have pledged allegiance to Islamic State militants shot and seriously wounded a Philadelphia police officer in an ambush on his patrol car, the city’s police commissioner said on Friday.

Edward Archer of Philadelphia approached Officer Jesse Hartnett, 33, shortly before midnight and fired 11 rounds, three of which hit the officer in his arm, authorities said. Police released still images from surveillance video that showed the gunman dressed in a long white robe walking toward the car and firing, eventually getting close enough to shoot directly through the window.

Hartnett chased Archer, who was arrested by responding officers and later confessed to the attack, saying he had carried it out ‘in the name of Islam,’ police officials told reporters.

‘He has confessed to committing this cowardly act in the name of Islam,’ Ross told a press conference, adding that the 30-year-old assailant also referenced Islamic State militants.

Philadelphia Police Captain James Clark added, ‘He said he pledges his allegiance to Islamic State, he follows Allah and that was the reason he was called on to do this.’”

The clash of civilizations, namely that between the West and Islam, seems to be making the news more and more frequently. Earlier in the same week, international news was reporting on a Muslim man shot by Paris police as “he attempted to enter a police station in the northern Paris neighborhood of Barbes, bearing a butcher’s knife and yelling ‘Allahu Akbar.’” And days before that the West was shocked to learn about 1,000 men of Middle Eastern and North African descent sexually assaulting women in Cologne on New Years.

As the sense of chaos and discord likely increases, the reactions within the West will be interesting to follow. Samuel Huntington might end up being quite right when he wrote the following in The Clash of Civilizations:

Pointed words, but is there truth to them?