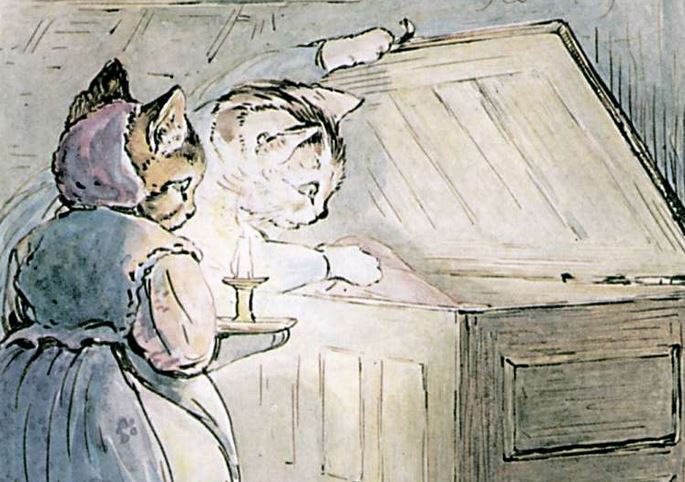 My relationship with Beatrix Potter goes way back. I got to know her in second grade when the school English curriculum took me through her famous stories one by one. Although finding the definitions for the vocabulary words and answering the comprehension questions – in COMPLETE sentences, mind you – were a daunting task, I did enjoy Ms. Potter’s works.

Thus, it piqued my interest to hear that an unpublished Beatrix Potter story has been unearthed and is set to hit the bookstores later this fall:

“The tale about a sharply dressed feline has ‘all the hallmarks of Potter’s best works,’ editor Jo Hanks, who stumbled upon the story, says in an interview with Penguin U.K., which will publish the book.

At the time Potter was writing Kitty-in-Boots in 1914, she told her publisher that the story was centered on ‘a well-behaved prime black Kitty cat, who leads rather a double life.’

Hanks says she ‘stumbled on an out-of-print collection of her writings’ and saw that reference to the story in a letter from Potter to her publisher.

This led her to the publisher’s archive, where she says she found ‘three manuscripts, two handwritten in children’s school notebooks and one typeset and laid out in a dummy book; one rough colour sketch of Kitty-in-Boots and a pencil rough of our favourite arch-villain, Mr Tod.’”

Due to the lack of illustrations, publishers decided to fill in Potter’s gaps with drawings from Quentin Blake, the famous illustrator behind many of Roald Dahl’s books. But unlike Potter, Blake is a cartoonist whose work, though clever and fanciful, is a departure from the detailed, realistic, and beautiful drawings which made Potter’s work so famous.

For illustrative purposes, the above pictures show Potter’s original illustration for the story on the left and Blake’s rendition on the right. Is it possible to deem Potter’s style as superior to Blake’s? Or is it simply a case of one’s subjective taste?