In Wisconsin, It’s No Longer PC to Root for Your Team 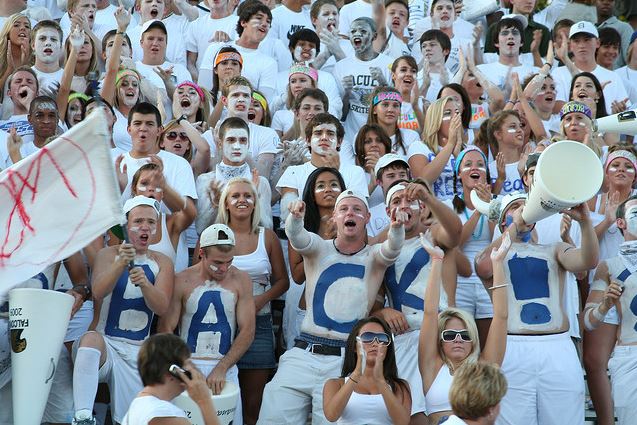 High school sporting events are normally times of noise, excitement, and school spirit. But thanks to the pervasive PC culture, such elements are no longer allowed at some Wisconsin high schools. According to the Huffington Post:

“The Wisconsin Interscholastic Athletic Association has deemed familiar chants such as ‘air ball’ and ‘scoreboard’ offensive, and has tried to bar their usage at local games.”

But those aren’t the only things the WIAA considers offensive. All told, the organization lists 29 items which are now taboo at sporting events, some of which include:

1.  Booing of any kind
2.  “Over-rated” chant
3.  “Scoreboard” cheer
4.  “Air ball” chant
5.  “Nuts n’ Bolts…” chant
6.  “You, You, You” chant
7.  “You can’t do that,” “fund-a-mentals,” “We can’t hear you,” “Warm up the bus” chants
8. “Sieve, sieve, sieve” chant
9.  “Nah, nah, hah, nah…hey-eyy goodbye” song; “Season’s Over” chant
10. “Push it, push it, push it” chant
11. “U-S-A, U-S-A, U-S-A” or any acronym of derogatory language or innuendo
12.  Any chants/comments that are disrespectful to an opponent or official, including school mascot, school nickname, school population, opponent’s town or community or that is derogatory to an individual because of race, gender, creed, body type or ability
13.  Holding up papers or props during opponent introductions
14.  Turning backs to court/field during opponent introductions

Granted, engaging in some of these acts may not always be in good taste, but is that reason enough to completely ban them from an energetic gym full of teenagers? It seems high school sports spectators are simply the latest victim of a ban-happy PC culture.