George Orwell: What is Fascism? 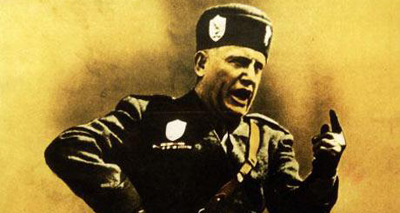 Accusations of fascism are tossed around like candy at a Fourth of July parade. It’s been this way for a long time. Anything that hints of some person or some group not getting to do whatever they want or with which there is violent disagreement is often labeled fascist. Today is no different.

George Orwell saw the same problem in 1944 when he wrote, “It will be seen that, as used, the word ‘Fascism’ is almost entirely meaningless.”

In fact, he wrote a lot more on the subject that year in a piece titled, “What is Fascism?”. Here it is:

“Of all the unanswered questions of our time, perhaps the most important is: ‘What is Fascism?’

One of the social survey organizations in America recently asked this question of a hundred different people, and got answers ranging from ‘pure democracy’ to ‘pure diabolism’. In this country if you ask the average thinking person to define Fascism, he usually answers by pointing to the German and Italian régimes. But this is very unsatisfactory, because even the major Fascist states differ from one another a good deal in structure and ideology.

It is not easy, for instance, to fit Germany and Japan into the same framework, and it is even harder with some of the small states which are describable as Fascist. It is usually assumed, for instance, that Fascism is inherently warlike, that it thrives in an atmosphere of war hysteria and can only solve its economic problems by means of war preparation or foreign conquests. But clearly this is not true of, say, Portugal or the various South American dictatorships. Or again, antisemitism is supposed to be one of the distinguishing marks of Fascism; but some Fascist movements are not antisemitic. Learned controversies, reverberating for years on end in American magazines, have not even been able to determine whether or not Fascism is a form of capitalism. But still, when we apply the term ‘Fascism’ to Germany or Japan or Mussolini’s Italy, we know broadly what we mean. It is in internal politics that this word has lost the last vestige of meaning. For if you examine the press you will find that there is almost no set of people — certainly no political party or organized body of any kind — which has not been denounced as Fascist during the past ten years. Here I am not speaking of the verbal use of the term ‘Fascist’. I am speaking of what I have seen in print. I have seen the words ‘Fascist in sympathy’, or ‘of Fascist tendency’, or just plain ‘Fascist’, applied in all seriousness to the following bodies of people:

Conservatives: All Conservatives, appeasers or anti-appeasers, are held to be subjectively pro-Fascist. British rule in India and the Colonies is held to be indistinguishable from Nazism. Organizations of what one might call a patriotic and traditional type are labelled crypto-Fascist or ‘Fascist-minded’. Examples are the Boy Scouts, the Metropolitan Police, M.I.5, the British Legion. Key phrase: ‘The public schools are breeding-grounds of Fascism’.

Socialists: Defenders of old-style capitalism (example, Sir Ernest Benn) maintain that Socialism and Fascism are the same thing. Some Catholic journalists maintain that Socialists have been the principal collaborators in the Nazi-occupied countries. The same accusation is made from a different angle by the Communist party during its ultra-Left phases. In the period 1930-35 the Daily Worker habitually referred to the Labour Party as the Labour Fascists. This is echoed by other Left extremists such as Anarchists. Some Indian Nationalists consider the British trade unions to be Fascist organizations.

Communists: A considerable school of thought (examples, Rauschning, Peter Drucker, James Burnham, F. A. Voigt) refuses to recognize a difference between the Nazi and Soviet régimes, and holds that all Fascists and Communists are aiming at approximately the same thing and are even to some extent the same people. Leaders in The Times (pre-war) have referred to the U.S.S.R. as a ‘Fascist country’. Again from a different angle this is echoed by Anarchists and Trotskyists.

Trotskyists: Communists charge the Trotskyists proper, i.e. Trotsky’s own organization, with being a crypto-Fascist organization in Nazi pay. This was widely believed on the Left during the Popular Front period. In their ultra-Right phases the Communists tend to apply the same accusation to all factions to the Left of themselves, e.g. Common Wealth or the I.L.P.

Catholics: Outside its own ranks, the Catholic Church is almost universally regarded as pro-Fascist, both objectively and subjectively;

War resisters: Pacifists and others who are anti-war are frequently accused not only of making things easier for the Axis, but of becoming tinged with pro-Fascist feeling.

Supporters of the war: War resisters usually base their case on the claim that British imperialism is worse than Nazism, and tend to apply the term ‘Fascist’ to anyone who wishes for a military victory. The supporters of the People’s Convention came near to claiming that willingness to resist a Nazi invasion was a sign of Fascist sympathies. The Home Guard was denounced as a Fascist organization as soon as it appeared. In addition, the whole of the Left tends to equate militarism with Fascism. Politically conscious private soldiers nearly always refer to their officers as ‘Fascist-minded’ or ‘natural Fascists’. Battle-schools, spit and polish, saluting of officers are all considered conducive to Fascism. Before the war, joining the Territorials was regarded as a sign of Fascist tendencies. Conscription and a professional army are both denounced as Fascist phenomena.

Nationalists: Nationalism is universally regarded as inherently Fascist, but this is held only to apply to such national movements as the speaker happens to disapprove of. Arab nationalism, Polish nationalism, Finnish nationalism, the Indian Congress Party, the Muslim League, Zionism, and the I.R.A. are all described as Fascist but not by the same people.

It will be seen that, as used, the word ‘Fascism’ is almost entirely meaningless. In conversation, of course, it is used even more wildly than in print. I have heard it applied to farmers, shopkeepers, Social Credit, corporal punishment, fox-hunting, bull-fighting, the 1922 Committee, the 1941 Committee, Kipling, Gandhi, Chiang Kai-Shek, homosexuality, Priestley’s broadcasts, Youth Hostels, astrology, women, dogs and I do not know what else.

Yet underneath all this mess there does lie a kind of buried meaning. To begin with, it is clear that there are very great differences, some of them easy to point out and not easy to explain away, between the régimes called Fascist and those called democratic. Secondly, if ‘Fascist’ means ‘in sympathy with Hitler’, some of the accusations I have listed above are obviously very much more justified than others. Thirdly, even the people who recklessly fling the word ‘Fascist’ in every direction attach at any rate an emotional significance to it. By ‘Fascism’ they mean, roughly speaking, something cruel, unscrupulous, arrogant, obscurantist, anti-liberal and anti-working-class. Except for the relatively small number of Fascist sympathizers, almost any English person would accept ‘bully’ as a synonym for ‘Fascist’. That is about as near to a definition as this much-abused word has come.

But Fascism is also a political and economic system. Why, then, cannot we have a clear and generally accepted definition of it? Alas! we shall not get one — not yet, anyway. To say why would take too long, but basically it is because it is impossible to define Fascism satisfactorily without making admissions which neither the Fascists themselves, nor the Conservatives, nor Socialists of any colour, are willing to make. All one can do for the moment is to use the word with a certain amount of circumspection and not, as is usually done, degrade it to the level of a swearword.”

Isn’t that the truth?