The Threat to Free Speech at Missouri 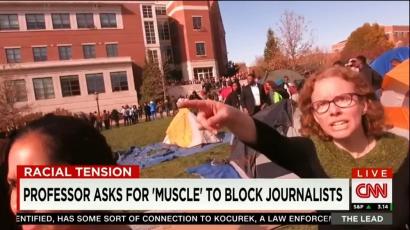 According to various news sources, the police at the University of Missouri are asking students to report “hateful and hurtful speech”.

Here’s the document reported by The Daily Caller:

As the police admit, hateful and hurtful speech “are not crimes”. Yet, they also indicate that the University of Missouri can take disciplinary action. And here is when we a student should worry. Nowhere in the “Standard of Conduct” for students is there any mention or definition of “hateful and hurtful speech”.  There is discussion about harassment, which can be used quite broadly if a university so desires as the Foundation for Individual Rights in Education points out:

“…‘harassment codes’ covering speech and expression still exist on the overwhelming majority of college campuses today, including public institutions bound by the First Amendment. These codes have survived in large measure because of a clever attempt by their drafters to confuse speech, including ‘offensive’ speech (which enjoys clear constitutional and moral protection) with ‘harassment’…”

You can learn more about the First Amendment and speech codes on public university campuses by clicking here.

In addition to the ability to use harassment codes at the University of Missouri, the school also admits that the Student Code of Conduct doesn’t ultimately matter because it can be changed at any time to suit the needs of the University:

Since it is a public university, one does have certain 1st Amendment rights. But how much fighting will you have to do to defend yourself from the accusations of “hateful or hurtful speech” and how that speech might be interpreted as harassment? And how much comfort can you have when the rules can change at any moment?

Unless you believe that everyone should be in line with your thinking and you should have the power to force them to get in line, then this should be worrisome. Who is to define what hateful or hurtful speech is? Hurt, particularly, is awfully subjective to an individual. If the powers-that-be take it upon themselves to come to the aid of anyone who is “hurt” by another’s speech, few will dare to speak. Furthermore, the first and loudest to cry that they are “hurt” will be those who are in control of language and discussions, they will be the ones who ultimately determine whether or not something is hurtful. The potential for abuse is astounding.

Besides the danger present to individual students, we should also inquire about how such threats to speech impact the discussion and engagement of ideas. How often will students keep quiet because they don’t want the trouble? Will professors be fearful of addressing certain subjects? Will some professors even prevent certain subjects from being addressed based on their own biases?

Sadly, we already know these things are already happening. Professor Click of the University of Minnesota asking for muscle to suppress 1st Amendment rights is just one of many examples: