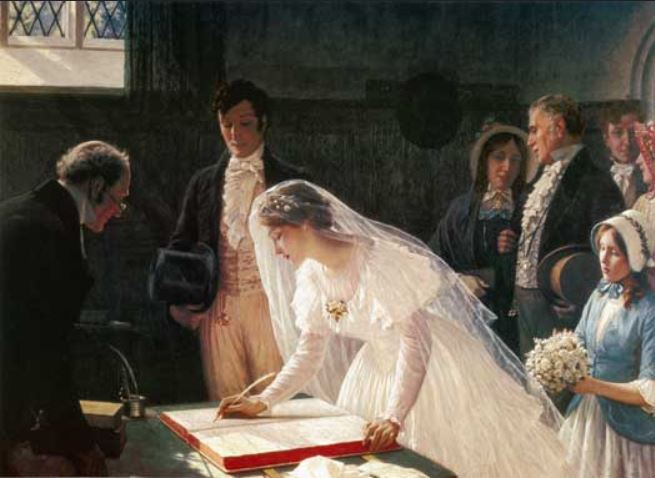 If you’ve lived the single life for any length of time, you’ve likely received marriage advice from those who’ve walked down the aisle before you… or maybe even from those who have not.

John Adams fell into this latter category when he recorded the following exchange with Hannah Quincy in his diary in 1759:

Hannah Quincy: “Suppose you were in your study, engaged in the investigation of some point of law or philosophy, and your wife should interrupt you accidentally, and break the thread of your thoughts so that you never could recover it?”

John Adams: “No man but a crooked Richard would blame his wife for such an accidental interruption; and no woman but a Xanthippe would insist upon her husband’s company after he had given her his reasons for desiring to be alone.”

Translation: Be slow to blame, but sensitive to the needs of your spouse.

Hannah Quincy: “Should you like to spend your evenings at home in reading and conversing with your wife, rather than spend them abroad in taverns or with other company?”

John Adams: “[I] should prefer the company of an agreeable wife to any other company, for the most part, not always; I should not like to be imprisoned at home.”

Translation: Spend most of your time at home, but don’t isolate yourself from the rest of society.

John Adams: “I would flee my country, or she should.”

Hannah Quincy: “How shall a pair avoid falling into a passion or out of humor upon some occasions, and treating each other unkindly?”

John Adams: “By resolving against it; every person knows that all are liable to mistakes and errors, and if a husband finds his wife in one, he should use reasoning and convince her of it, instead of being angry; and so, on the contrary. But if it happens that both get out of humor and an angry dispute ensues, yet both will be sorry when their anger subsides, and mutually forgive and ask forgiveness, and love each other the better for it for the future.”

Although spoken in a bantering, almost scornful fashion, Adams’ words convey simple truths which are easy to overlook. Considering that Adams eventually enjoyed a long and happy marriage to his wife Abigail, perhaps both single and married alike would do well to heed Adams’ advice in this day and age.