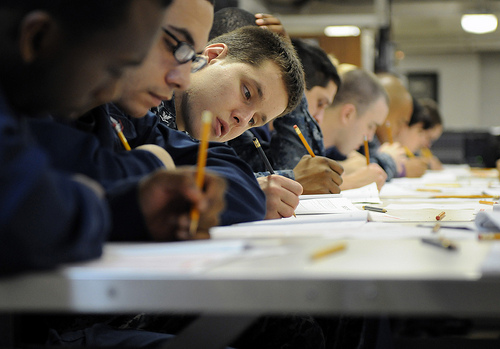 While nobody really likes standardized tests, they do serve a purpose. That’s why calls to do away with them, particularly by teachers union lobbyists, should be met with skepticism.

“The Legislature has made a raft of changes to public school testing in recent years, including eliminating high school exit exams in 2013 and capping testing time earlier this year. It’s been the subject of repeated calls to eliminate nearly two dozen different exams, work groups and stalled legislative proposals. And lawmakers aren’t done.

Some lawmakers and the state’s massive teacher’s union, Education Minnesota, targeted their focus on the state’s annual math, science and reading exams for possible cuts. Roseville Public Schools Assistant Superintendent Peter Olson-Skog said those tests, called the Minnesota Comprehensive Assessments, focus too much on meeting federal standards at the expense of better teaching and learning tools.”

Opponents, according to the Star Tribune, argued,

“But others objected to focusing on the assessments for possible cuts. Jim Bartholemew, education policy director at the Minnesota Business Partnership. Joshua Crosson of MinnCAN, an advocacy group dedicated to tackling the achievement gap, said those exams provide the state a crucial look at which schools and districts need the most help to tackle disparities.”

Those opponents are right. Let’s look at some of the recent statistics surrounding Minnesota as a whole and then some of the urban districts. Here’s how Minnesota is doing as a whole based on the Minnesota Comprehensive Assessments (MCAs) discussed in the article:

When the education system in Minnesota gets 42% of the state’s budget, which does not include property taxes, do you think some people are incentivized to hide the poor performance in order to keep the money flowing? When less than 60% of 10th grade students in the state are reading at grade-level, that’s certainly something you wouldn’t want to get out if you care more about the adults than the students.

Again, the opponents of the changes argued that “exams provide the state a crucial look at which schools and districts need the most help to tackle disparities.” How true. For more evidence, let’s see what the standardized tests reveal about reading abilities in Minneapolis Public Schools, one of the state’s largest districts with a budget of almost $800 million annually – that’s over $22,000 per student each year!

The results of all that spending? Read them and weep:

Why, yes, there are significant disparities which are revealed by standardized tests. While over 77% of White students are reading at or above grade-level, less than 25% of Hispanic, Black, and Native-American students are doing so.

Where some of those disparities really matter can be seen over in St. Paul Public Schools:

In St. Paul, a district which spends almost $19,000 per student, only 32% of 10th grade students are reading at or above grade-level. Yet, the district proudly graduates 76% of its students. With that large of a gap between the percentage of 10th graders reading at or above grade-level and the graduation rate, how many of those who graduate from St. Paul are actually ready? Is that not a grave injustice?

In case you were wondering, here are the high school reading proficiency rates in St. Paul by race:

More massive disparities that need to be questioned. But without independent standardized tests these disparities won’t be visible to the public. Instead, the district will continue to social promote students and graduate them from high school despite how poorly prepared they are for college or work.

It is for this reason that Democrat Robert Kennedy pushed for standardized tests many decades ago. On the topic, he had the following to say in the U.S. Senate in 1965:

…I wonder if we couldn’t have some system of reporting…through some testing system that would be established (by) which the people at the local community would know periodically…what progress had been made.”

It is very easy for people in the education system to mislead both students and the public. In the immortal words of Ronald Reagan, we need to trust, but verify. That’s why, when billions of taxpayer dollars are being spent each year on education, we need the ability to independently verify whether or not the education system is doing its job.