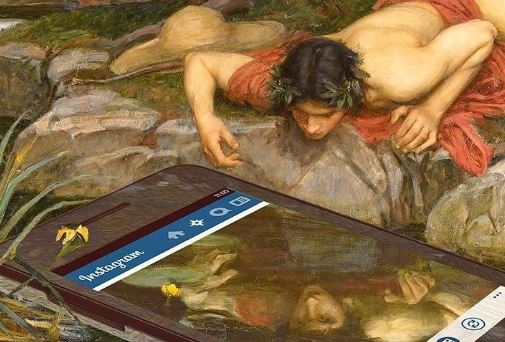 Do you know the story of Echo and Narcissus? If not, it’s a good one in the age of selfies.

Before there were selfies, there were mirrors. Nearly everywhere we go in the modern world, we have the chance to gaze upon ourselves with them. It’s something that we take for granted, while forgetting that it’s a relatively new impact on human history. Consider that in the 18th century, the Palace of Versailles boasted of its Hall of Mirrors. Such was the wealth required to be able to gaze upon yourself that the Kings and Queens of France would devote an entire wing of their palace to mirrors. And now mirrors are so commonplace that we do not even consider how they may change our psychology.

With the advent of the smartphone, we can not only stare upon ourselves, but also share the best of ourselves with the world. Selfies are mocked, perhaps because they reveal what should be kept private and under control – our self-love. The love of self has always lurked in the heart of man and since the Ancients, the danger of giving yourself over to the desire has been recognized. So it is in the story of Echo and Narcissus, which is found in D’Aulaires’ Book of Greek Myths.

Here is the story of Echo:

“Echo was one of the nymphs with whom Pan fell in love. She was a gay nymph who chattered and prattled all day long and never kept quiet enough for Pan to win her with music and poetry.

One day Hera came down from Olympus to look for Zeus. She suspected that he was playing with the nymphs, but Echo detained her so long with idle chatter that Zeus … was able to sneak away. Hera, in a rage, punished Echo by taking from her the gift of forming her own words. From then on poor Echo could only repeat the words of others.”

Eventually, Echo lost her heart to Narcissus, and “he was so handsome that every girl and every nymph he met fell in love with him. Unfortunately, he liked nobody but himself.”

“Echo trailed silently behind Narcissus as he hunted in the woods, hoping to hear an endearing word from him that she could repeat. But he never so much as noticed her. At last toward nightfall, they came to a quiet pool, and as Narcissus was thirsty, he bent down to drink. Suddenly, he stopped and stared, for in the mirroring surface of the water he saw the handsomest face he had ever seen. He smiled and the handsome face smiled back at him. Joyfully he nodded and so did the stranger in the water.

‘I love you,’ said Narcissus to the handsome face.

‘I love you,’ repeated Echo eagerly. She stood behind him, happy to be able to speak to him at last.

But Narcissus neither saw nor heard her; he was spellbound by the handsome stranger in the water. He did not know that it was his own image that he had fallen in love with and he sat smiling at himself, forgetting to eat, forgetting to drink, until he wasted away and died. Hermes came and led him down to the realm of the dead, but where he had been sitting the lovely Narcissus flower sprang up. Echo stood beside the flower and grieved and pined until she too faded away.

Nothing was left of Echo but her voice, which to this day can be heard senselessly repeating the words of others.”

From this story, we get the term narcissism. Narcissus so loves himself that he forgets to live, actually dying from selfishness. He may be the extreme example of the dangers of overly loving the self, but the warnings are worth heeding.