These John Paul II Quotes will Cause a Stir 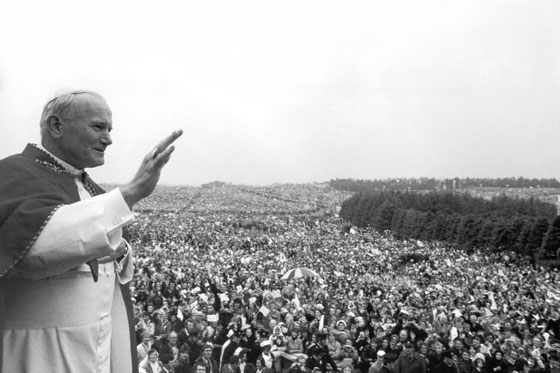 Known for many things, the Pope played an important role battling it out with the Evil Empire, thereby weakening the Soviet Union from within. One of the most notable moments was his nine-day tour to Poland in 1979 while the country was still under control of the Soviets. Here’s some old-school coverage of Pope John Paul II’s penetration of the Iron Curtain:

In Saint John Paul II’s 1991 encyclical, On the Hundredth Anniversary of Rerum Novarum, he delves into important matters of economics, culture, and humanity. It’s a long encyclical, but here are some of the more fascinating points:

The Fundamental Error of Socialism

The Social Nature of Man

“…the social nature of man is not completely fulfilled in the State, but is realized in various intermediary groups, beginning with the family and including economic, social, political and cultural groups which stem from human nature itself and have their own autonomy, always with a view to the common good.”

It’s an Error to see Human Freedom as Self-Love

“As has been mentioned, this error consist in an understanding of human freedom which detaches it from obedience to the truth, and consequently from the duty to respect the rights of others. The essence of freedom then becomes self-love carried to the point of contempt for God and neighbor, a self-love which leads to an unbridled affirmation of self-interest and which refuses to be limited by any demand of justice.”

Man is More Than Economics

“It is not possible to understand man on the basis of economics alone, nor to define him simply on the basis of class membership. Man is understood in a more complete way when he is situated within the sphere of culture through his language, history, and the position he takes towards the fundamental events of life, such as birth, love, work and death. At the heart of every culture lies the attitude man takes to the greatest mystery: the mystery of God. Different cultures are basically different ways of facing the question of the meaning of personal existence.”

The Good and Evil of Man

“Man tends towards good, but he is also capable of evil. He can transcend his immediate interest and still remain bound to it. The social order will be all the more stable, the more it takes this fact into account and does not place in opposition personal interest and the interests of society as a whole, but rather seeks ways to bring them into fruitful harmony. In fact, where self-interest is violently suppressed, it is replaced by a burdensome system of bureaucratic control which dries up the wellsprings of initiative and creativity.”

Politics as a ‘Secular Religion’

“When people think they possess the secret of a perfect social organization which makes evil impossible, they also think that they can use any means, including violence and deceit, in order to bring that organization into being. Politics then becomes a ‘secular religion’ which operates under the illusion of creating paradise in this world.”

The Origin of Property

“…the earth does not yield its fruits without a particular human response to God’s gift, that is to say, without work. It is through work that man, using his intelligence and exercising his freedom, succeeds in dominating the earth and making it a fitting home. In this way, he makes part of the earth his own, precisely the part which he has acquired through work; this is the origin of individual property.”

The Power and Limits of the Free Market

“…on the level of individual nations and of international relations, the free market is the most efficient instrument for utilizing resources and effectively responding to needs. But this is true only for those needs which are ‘solvent’, insofar as they are endowed with purchasing power, and for those resources which are ‘marketable’, insofar as they are capable of obtaining a satisfactory price. But there are many human needs which find no place on the market. It is a strict duty of justice and truth not to allow fundamental human needs to remain unsatisfied, and not to allow those burdened by such needs to perish … These objectives include a sufficient wage for the support of the family, social insurance for old age and unemployment, and adequate protection for the conditions of employment.”

The Purpose of a Business

“…the purpose of a business firm is not simply to make a profit, but is to be found in its very existence as a community of persons who in various ways are endeavoring to satisfy their basic needs, and who form a particular group at the service of the whole of society.”

Man and the Environment

“Man thinks that he can make arbitrary use of the earth, subjecting it without restraint to his will, as though it did not have its own requisites and a prior God-given purpose, which man can indeed develop but must not betray.”

The Importance of Family

“The first and fundamental structure for ‘human ecology’ is the family, in which man receives his first formative ideas about truth and goodness, and learns what it means to love and to be loved, and thus what it actually means to be a person. Here we mean the family founded on marriage, in which the mutual gift of self by husband and wife creates an environment in which children can be born and develop their potentialities, become aware of their dignity and prepare to face their unique and individual destiny.”

State and the Market Serve Man

“The individual today is often suffocated between two poles represented by the State and the marketplace. At times it seems as though he exists only as a producer and consumer of goods, or as an object of State administration. People lose sight of the fact that life in society has neither the market nor the State as its final purpose, since life itself has a unique value which the State and the market must serve.”

“Justice will never be fully attained unless people see in the poor person, who is asking for help in order to survive, not an annoyance or a burden, but an opportunity for showing kindness and a chance for greater enrichment.”