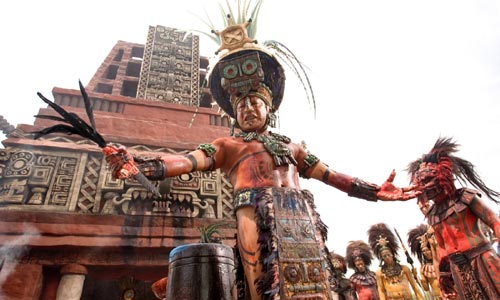 Few in the West would defend ISIS these days. Whether it be the raping, the crucifying, the tossing of gays off of buildings, the burning of prisoners, the slitting of throats, almost all people are unified in their disgust. Oddly enough, in a world of relative morals, ISIS seems to define evil.

The result is that many Americans and much of the world (see Russia’s newly launched attacks as evidence) is okay with the bombing and obliteration of ISIS. Yet, many of those calling for ISIS’ blood are the same who would call many a European conquistador evil for upending civilizations such as the Aztecs, Incas, or Mayans. You can’t have it both ways.

What would you have done if you had a firm belief in what was right and wrong, and then came into contact with peoples who sacrificed humans by the tens of thousands and even practiced cannibalism?

Defeated soldiers were not killed on the battlefield, but captured and returned to Tenochtitlan for sacrifice. The Aztec rulers were convinced that the end of the world was nigh and butchered thousands to appease the gods. This was a culture obsessed with death: they believed that human sacrifice was the highest form of karmic healing. When the Great Pyramid of Tenochtitlan was consecrated in 1487 the Aztecs recorded that 84,000 people were slaughtered in four days.

Can you imagine that kind of slaughter in an age of social media? How long would it take for the cries for invasion and bombings to start? Not too long, probably.

Consider the first-hand account of what the Spaniards, under Hernan Cortes, found upon sacking the Aztec capital of Tenochtitalan with the aid of hundreds of thousands of non-Aztec natives. This was written by Bernal Díaz who fought with Cortes in his The True History of the Conquest of New Spain.

On each altar was a giant figure, very tall and very fat. They said that the one on the right was Huichilobos [i.e. Huitzilopochtli], their war-god. He had a very broad face and huge terrible eyes. And there were so many precious stones, so much gold, so many pearls and seed-pearls stuck to him with a paste which the natives made from a sort of root, that his body and head were covered with them. . . .

There were some smoking braziers of their incense, which they call copal, in which they were burning the hearts of three Indians whom they had sacrificed that day; and all the walls of that shrine were so splashed and caked with blood that they and the floor too were black. Indeed, the whole place stank abominably. We then looked to the left and saw another great image of the same height as Huichilobos, with a face like a bear and eyes that glittered, being made of their mirror-glass, which they call tezcat. Its body, like that of Huichilobos, was encrusted with precious stones, for they said that the two were brothers. This Tezcatlipoca, the god of hell, had charge of the Mexicans’ souls, and his body was surrounded by figures of little devils with snakes’ tails. The walls of this shrine also were so caked with blood and the floor so bathed in it that the stench was worse than that of any slaughter-house in Spain. They had offered that idol five hearts from the day’s sacrifices.

At the very top of the cue [temple] there was another alcove, the woodwork of which was very finely carved, and here there was another image, half man and half lizard, encrusted with precious stones, with half its body covered in a cloakþ. Here too all was covered with blood, both walls and altar, and the stench was such that we could hardly wait to get out. They kept a large drum there, and when they beat it the sound was most dismal, like some music from the infernal regions, as you might say, and it could be heard six miles away. In that small platform were many more diabolical objects, trumpets great and small, and large knives, and many hearts that had been burnt with incense before their idols; and everything was caked with blood. The stench here too was like a slaughter-house, and we could scarcely stay in the place.

We can talk about the sins of the West, and they were many, but our civilization did not rest upon the ritualistic sacrificing of other humans. If the taking of innocent life is wrong, then we should be grateful for the eradication of this wide-spread practice in South and Central America. And, yes, we can do that at the same time as we recognize the sins of many of the same individuals who ended it.