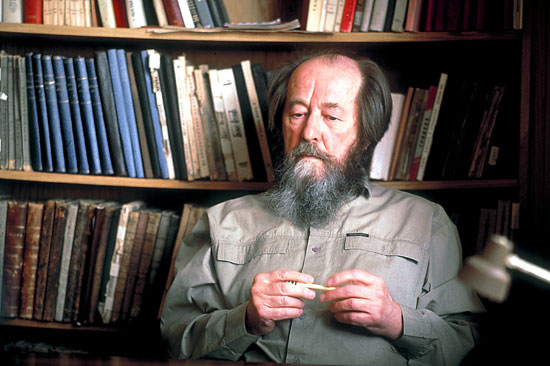 1. “The belly is an ungrateful wretch, it never remembers past favors, it always wants more tomorrow.”

2. “From ancient times decline in courage has been considered the beginning of the end.”

3. “Untouched by the breath of God, unrestricted by human conscience, both capitalism and socialism are repulsive.”

4. “Truth eludes us if we do not concentrate with total attention on its pursuit.”

5. “One should never direct people towards happiness, because happiness too is an idol of the market-place. One should direct them towards mutual affection.”

6. “The meaning of earthly existence lies not, as we have grown used to thinking, in prospering but in the development of the soul.”

7. “If only there were evil people somewhere insidiously committing evil deeds, and it were necessary only to separate them from the rest of us and destroy them. But the line dividing good and evil cuts through the heart of every human being. And who is willing to destroy a piece of his own heart?”

8. “We have placed too much hope in political and social reforms, only to find out that we were being deprived of our most precious possession: our spiritual life.”

9. “You only have power over people so long as you don’t take everything away from them. But when you’ve robbed a man of everything he’s no longer in your power — he’s free again.”

10. “Can a man who’s warm understand one who’s freezing?”

11. “Only those who decline to scramble up the career ladder are interesting as human beings. Nothing is more boring than a man with a career.”