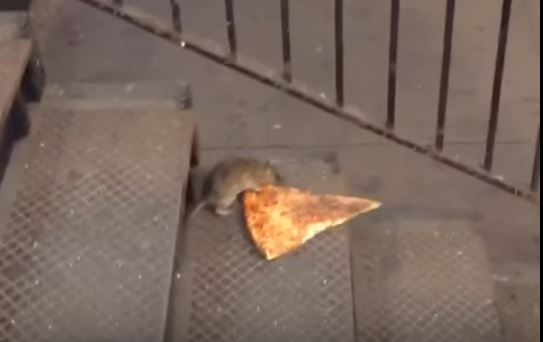 I’ve been told that the video about a rat dragging a pizza is trending in the news. I’m sure it’s good clickbait material, which we might even benefit from, too.

But at least we’re being honest.

USA Today, “the nation’s newspaper”, got in on it:

ABC News joined in, too:

Where would we be without knowing that a rat carried a pizza slice twice its size in a New York subway? Obviously, not as entertained.

And isn’t that what a big portion of the news is about? Entertainment? While some news is good to know, a whole lot of it has absolutely no bearing on our lives or, even if it does, there is little we can do about it.

Yet, all news impacts us. We see the world differently, hold to different emotions, say something even though we don’t believe it, at other times we feel pressured to not say something by an invisible social pressure.

The rat story is just another example of fluff, designed to drive up clicks and to lull the audience, readying us for the next media-driven story about which we are all supposed to be outraged. It is the opportunity for the news to pull us in, to befriend us, to entertain us, to show that they are just one of us. But at the end of the day, we should remember that the news has great psychological power over us as individuals and as a nation, a power that we freely give to them by subscribing to their stories.

But enough of that, be entertained: