“The Bride Has Nothing On” 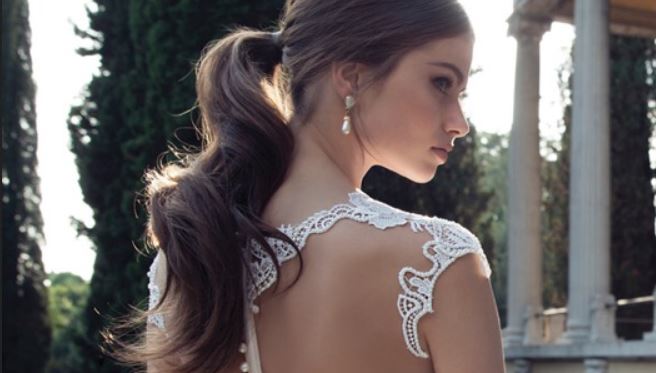 Fashion Week is upon us – or so say the many headlines whose corresponding articles will likely reveal pictures of the latest, greatest, and… unusual attire.

The arrival of fashion week reminded me of an article published earlier this year in The Atlantic. Cleverly entitled Aisle Be Seeing You: The Rise of the Totally Transparent Bridal Gown, the article told of a new trend in bridal fashion which throws traditional wedding and social mores to the wind:

“[T]he most revealing pieces in the latest bridal lines—revealing, in every sense of the word—were Vera Wang’s mermaid-cut sheaths, staunchly traditional in their ribbons and lace, but innovative in their most striking features: The gowns are almost fully translucent, from their necklines to their hems. The lingerie their models wore, dainty and daring at the same time, was on full display under the fishnet and lace bodices of the gowns. The lingerie was, in fact, an elemental part of the dresses.”

According to Megan Garber, the article’s author, the barely-there wedding dress trend – while “shocking” – is simply a natural outgrowth of the shift toward a “sexified” and more permissive society:

“It’s worth taking a moment to consider that shift. Which is simply about fashion, yes, bridal trends following broader ones. But which is also, bridal gowns being what they are, about changing attitudes toward marriage, and weddings, and feminism, and femininity, and the many other things that accompany a woman as she walks down an aisle in a dress that she will, if all goes according to plan, never wear again.”

Garber continues by saying that this trend can be seen as “an overt rejection of the sexual mores at play in the traditional wedding dress.”

Wedding dresses have always been, on some level, about sex: the white as a sign (and a reassurance) of the bride’s virginity; the expanse of fabric as a tacit promise that, while sex will be had, it will be had in the proper way. Women are getting married at older ages than they used to. Which means, among so much else, that they’re less inclined to opt for princess-driven designs—and also that they’re less inclined to designs that emphasize the virginal. ‘For my generation,’ the soon-to-be bride Natasha Da Silva told The New York Times in 2008, ‘looking like a virgin when you marry is completely unappealing, boring even. Who cares about that part anymore?’”

It certainly seems like nobody cares about that part any more, particularly in a society where multiple hook-ups are becoming more common and government statistics report that “almost all Americans have sex before marrying.”

But should we care? Does people’s willingness to bare all and open themselves up to any hook-up or sexual experience for the sake of personal pleasure also open them up to other, less-pleasurable situations?

“Public Virtue cannot exist in a Nation without private, and public Virtue is the only Foundation of Republics. There must be a positive Passion for the public good, the public Interest, Honour, Power and Glory, established in the Minds of the People, or there can be no Republican Government, nor any real Liberty: and this public Passion must be Superiour to all private Passions. Men must be ready, they must pride themselves, and be happy to sacrifice their private Pleasures, Passions and Interests….”

It’s easy to want to throw societal norms and sexual barriers to the wind and do what we want. But what if Adams is right in his assessment? By embracing our personal passions and pleasures, might we actually be putting our national and personal freedoms at risk?