Nietzsche Thought Christianity Had These 4 ‘Advantages’ 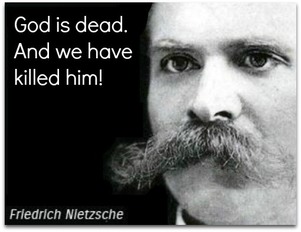 I guess it’s a Nietzsche kind of day…

Earlier in the day we posted a quote from Nietzsche on the fate of liberal institutions. It resulted in a discussion about Nietzsche’s attitude toward Christianity and morality in the West (you can see that discussion here), so we thought we would add to it by posting the passage that appears below.

The German philosopher Friedrich Nietzsche was a complicated guy. He was a famous critic of Christianity, and thought that it needed to be transcended by modern men and women. But at the same time, he granted that there were some “advantages” to the Christian understanding of morality – advantages that were no longer operative in a more relativistic, nihilist, post-Enlightenment world.

Here is the passage from his Will to Power where he notes the 4 advantages of the Christian moral hypothesis:

“What were the advantages of the Christian moral hypothesis?

1. It granted man an absolute value, as opposed to his smallness and accidental occurrence in the flux of becoming and passing away.

2. It served the advocates of God insofar as it conceded to the world, in spite of suffering and evil, the character of perfection-including “freedom”: evil appeared full of meaning.

3. It posited that man had a knowledge of absolute values and thus adequate knowledge precisely regarding what is most important.

4. It prevented man from despising himself as man, from taking sides against life; from despairing of knowledge: it was a means of preservation.

In sum: morality was the great antidote against practical and theoretical nihilism.”

As in Nietzsche’s time, many in our present age have moved on from Christianity (or religion in general, for that matter) while trying to hang on to moral standards. But it’s worth asking, as did Nietzsche, what is the ultimate (“metaphysical”) foundation of those moral standards, then? How does one justify holding on to them and recommending them to others? How do we know what is “good” and what is “bad,” and who determines it?