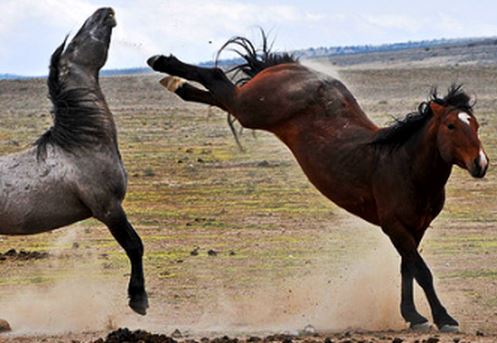 Have you ever seen a “hen-pecked” chicken? It’s not pretty. Here’s a picture:

It turns out that chickens are actually quite cruel to each other. There is a “pecking order” and you don’t want to be the chicken on the bottom of that order. The farmer my family visited over the weekend pointed out that it is so bad at times that he will have to separate chickens because they’ll brutally maim each other by pecking out eyeballs or even pecking each other to death.

A lot can be learned from living on a farm or in an agricultural setting. Just think about the number of phrases such as “hen-pecked” and “pecking order” that are derived from the lessons of life that up until recently the majority of people saw every day as they grew up. There is an understanding that things have a nature to them and that we can’t change everything, we have to work within certain natural laws.

At Intellectual Takeout, we often write about how modern man is disconnected from the world around him, but I don’t think even we are fully aware of how profoundly that disconnect alters our thinking and actions. If we are removed from examples that can help inform our thinking we are forced to make decisions in a vacuum, based on our limited life experience, emotions, or on the pseudo-reality presented by the media, rather than pulling from generations of experience. The popularity of self-help books probably explains some of this yearning for advice based on real-world experience.

In Marguerite Henry’s Misty of Chincoteague, a popular, 60-year-old Newberry Honor Book, we can see how in the past people learned more from nature and that the lessons could be transferred. The book tells the story of an annual, wild pony round-up that takes place on two islands off the coast of Virginia in the early 20th century. After the round-up, the foals are separated from the mares and some are sold off to support the local fire department.

During the story, two children are upset about separating the colts from their moms and approach the fire chief to do something about it.

“’What are you two looking so hollow-eyed about?’ the chief asked as he drew the children aside.

‘It’s about the colts,’ Maureen stammered.

‘Yes,’ said Paul. ‘We don’t believe they should be taken from their mothers, and we aim to do something about it – if you’ll let us, sir. We got lots of milk in the ice chest at home, and once we raised up a foal on a big nursing bottle and we still got the bottle. It’s cruel to starve the young things.’

The fire chief stood silent and thoughtful. He looked past the grounds and out to the bay, where the masts of the fishing boats formed spider-thin lines against the graying sky.

‘I don’t know if I can make you understand about this, but I’ll try,’ he began slowly. ‘Colts have got to grow up sometime. Their mothers can’t go on babying them all their lives. Haven’t you two seen a mare tell her youngster to rustle his own living?’

Paul and Maureen nodded in silence.

‘She can’t tell the colt in so many words,’ the fire chief continued. ‘She just kicks him away. Gentle-like at first. Then good and hard if he won’t understand. Sometimes she has to get pretty rough, especially when she’s going to have a new foal in a few months.’

‘But those little colts…’

‘Those little fellows,’ nodded the chief, ‘are old enough to fend for themselves. Separating them from their mothers is the kindest way we know to teach them how.’

Paul and Maureen reddened. They felt very young and foolish as they thanked the fire chief for explaining things.

‘Don’t thank me, you two. When I was rising up atwixt a youngster and a grownup, the same question worried me every Pony Penning Day. Finally, I watched a mare tell her colt to grow up and then I quit worrying. Now I want you to quit worrying, too.’”

Fascinating. How many helicopter moms could use the advice of not only letting their kids grow up, but making them grow up?

Divorced from nature, we do not have as many examples or experiences to pull from. Whether it be raising animals, training animals, dealing with death, grappling with cruelty, watching a crop fail, etc., there are a lot of lessons that can be learned from engaging with the world around us. If those lessons are desirable and beneficial, the question remains though as to how suburban and urban Americans can gain something akin to those experiences without simply packing up and moving to the country.