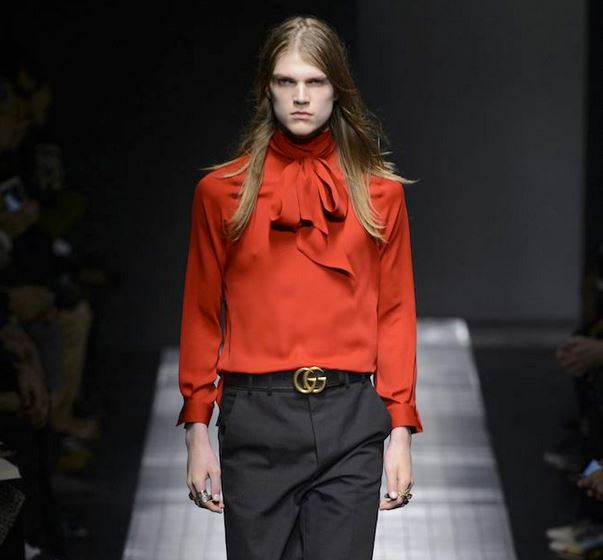 “In January, Gucci’s menswear runway collection was an eye-opener. …

It was because the men on the runway looked … like women.

In fact, some of them were women—an increasing trend in menswear shows. Models of both genders—waifish male models and boyish female models alike—were wearing silhouettes, fabrications, and items of clothing that traditionally appear in womenswear collections. …

A shift toward androgyny has been building over the past two years, and with Gucci’s new experimental take, it has hit its stride.”

Now, it’s not uncommon for many of the trends which make their way down the runway to never see the light of day in normal clothing stores. But I have to seriously wonder if this latest trend will stick.

You see, our culture has spent the last fifty years or more trying to make men into women. In the feminist rush to “equalize” the genders, we have told men to be more sensitive and less protective. Women have been taught to scoff at the gentleman who opens the door for her or offers to do some heavy lifting. In essence, we have learned to praise femininity in both sexes, while disregarding and downplaying any manly tendencies in the male sex.

But in the rush to feminize men, women are slowly figuring out that they’re not interested in that type of guy after all, and they’re beginning to wonder where all of the “manly” men have gone. Columnist Natasha Scripture is a case in point. She writes in The New York Times:

“Come to think of it, I haven’t met a manly man in quite some time. … They’re certainly rare sightings in New York City because here the abundant local species seems to be the metrosexual.

Look, there’s nothing wrong with a man who chooses to slather himself in self-tanner or some eau de Diptyque – a cancer-free guy who smells good is not a bad thing. And I fully support male grooming if it involves snipping off that pesky nose and ear hair. But I do have to draw the line at eyebrow waxing. Just leave those caterpillars alone!

And as much as I can appreciate a man who knows his sashimi, the more carnal, female side of me wants to see him tuck into a heaping plate of meat and potatoes; and to toss aside the cologne and let pheromones take charge. Yes, gentlemen, you’re allowed to sweat in my divine presence.

Also, when it comes to so-called manly traits, I would be kind of a masochist if I didn’t want a man with some level of emotional availability. But please, is it too much to ask that he not cry on a first date?

I hope we don’t become so much like each other that we end up essentially morphing into one androgynous being. That would just be plain weird.”

So guys, if the Gucci trend really does take off, I’d advise you to skip the lace and ruffles. No matter how much society tells us that men and women are equal and should therefore think, behave, and even dress alike, there is still a difference between the two sexes.

And deep down, it’s a difference that a majority of women still respect and admire.