The End of Education 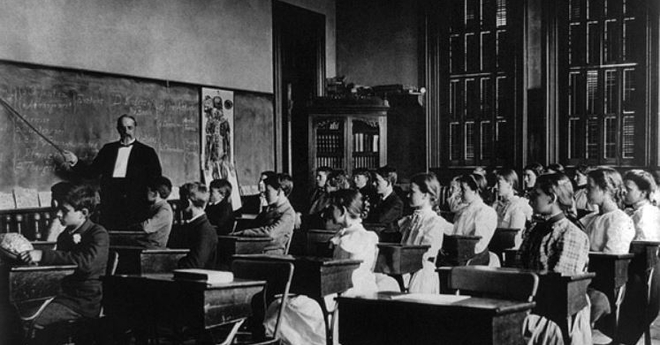 “The one thing that is never taught by any chance in the atmosphere of public schools,” wrote G. K. Chesterton, “is…that there is a whole truth of things, and that in knowing it and speaking it we are happy.”[1] Such words would be greeted with calculated coldness by the architects of the common core curriculum, who would no doubt respond with chilling indifference that there is no whole truth of things and therefore no meaningful happiness to be derived from it. Modernity never gets beyond Pontius Pilate’s famous question, quid est veritas, which is asked not in the spirit of philosophy as a question to be answered, but in the ennui of intellectual philandery as merely a rhetorical question that is intrinsically unanswerable. This intellectual philandery spawns numerous illegitimate children, each of which has its day as the dominant fad of educationists, at least until a new intellectual fad replaces it. It is in the nature of fads to fade but in the brief period in which they find themselves in the fashionable limelight they can cause a great deal of damage, a fact that Chesterton addressed with customary adroitness in 1910, over a century ago:

The trouble in too many of our modern schools is that the State, being controlled so specially by the few, allows cranks[2] and experiments to go straight to the schoolroom when they have never passed through the Parliament, the public house, the private house, the church, or the marketplace.

Obviously it ought to be the oldest things that are taught to the youngest people; the assured and experienced truths that are put first to the baby. But in a school today the baby has to submit to a system that is younger than himself. The flopping infant of four actually has more experience and has weathered the world longer than the dogma to which he is made to submit.

Many a school boasts of having the latest ideas in education, when it has not even the first idea; for the first idea is that even innocence, divine as it is, may learn something from experience.[3]

Implicit in Chesterton’s critique of the nature of modern education is a condemnation of the intellectual elitism that fuels the fads and fashions of the zeitgeist. The antidote to the poison of elitism, in Chesterton’s mind, is the populism and common sense of the common man; and the antidote to the transience of intellectual fads and fashions is the timeless touchtone of Tradition.

It is, of course, obvious that the disenfranchisement of the past inherent in the modern academy’s mania for novelty is also a disenfranchisement of the unborn. In denigrating and deriding the Great Books of Western Civilization, and the great ideas that informed them, the doyens of the modern academy have broken the continuum by which the wisdom of the ages is transmitted to each new generation. In refusing any authority beyond the self, homo superbus has disinherited himself from his own priceless inheritance; in imposing his egocentric ethos on the academy, he is also disinheriting future generations. Chesterton described modern man as a cad who contemptuously kicks down the ladder by which he’s climbed,[4] but the modern academic is even worse. He not only kicks down the ladder by which he’s climbed, he tries to destroy the ladder so that no-one coming after him can climb it either.

“The purpose of Compulsory Education,” wrote Chesterton, “is to deprive the common people of their common sense.”[5] This is manifest in the dogmatic imposition of radical relativism, the only philosophy compatible with homo superbus, and the implementation of secular fundamentalism, the political ideology of homo superbus, an ideology that refuses to tolerate anything but the things it tolerates itself, and does so in the name of “tolerance”, an egregious and outrageous example of the sheer chutzpah of Orwellian double-think! In short, homo superbus has recreated education in his own image, sacrificing all rival dogmas on the altar of self-worship he has erected to himself, on which the tabernacle of any god other than himself has been replaced by the mirror of self-referential subjectivism. There is no place in such self-referential education for religion or for any metaphysical philosophy.

The reductio ad absurdum at the heart of such a system of education was certainly not lost on Chesterton, who perceived it as the very antithesis of the object of a true education:

The only real object of all education is to teach people the proportions of things, that they may see what things are large and what small: we seem bent on teaching people to prefer in everything what is small to what is great, what is doubtful to what is certain, and what is trivial to what is eternal.[6]

Chesterton made the same point even more succinctly and sublimely in an epigrammatic turn of phrase that should serve as a motto for all true educators: “The whole point of education is that it should give a man abstract and eternal standards by which he can judge material and fugitive standards.”[7] The problem is that radical relativism believes that there are no abstract and eternal standards but that, on the contrary, all standards are merely fugitive, here today and gone tomorrow. Education does not serve truth because there is no truth to serve. Chesterton’s bon mot will not serve as a motto for the modern academy because the modern academy does not serve anything but itself. Its motto is non serviam. In such circumstances, education ceases to be the means to an end because there is no end, in the objective sense of a purpose or meaning to life. Such an education, incarnate in the common core, is nothing less than the end of education in that other doom-laden sense of the word. It has put an end to it.