It Ends as it Began: As a Political Ploy

The current U.S. president finally said it during a 60 Minutes interview: “The pandemic is over.” Though obviously true by the classical definition, Biden’s comment seemed almost accidental, said as an echoed response to a direct question.

Consider, however, that many times as many people die from COVID daily in the U.S. (300-400) than when the U.S. first announced the outrageous lockdowns of March 16, 2020. In those days, deaths were approaching 50 per day, mostly in New York. It will very likely get worse over the winter months. 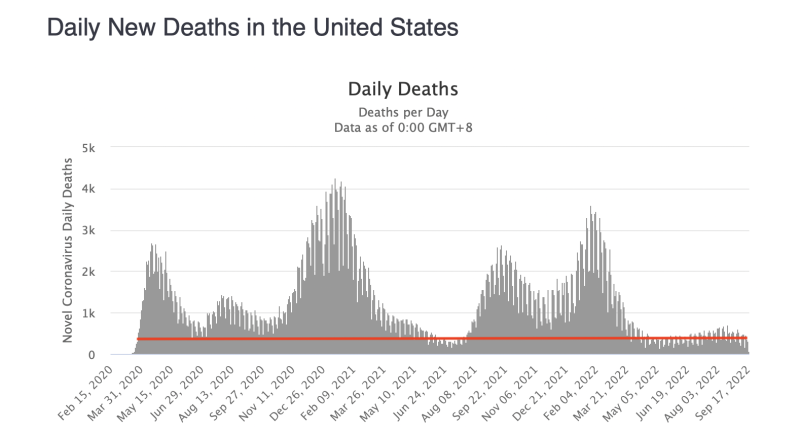 Instead of today’s calm and relaxed attitude–just chill because infection, disease, and death are just part of life–there were banshee screams from the whole of governments and media. People were running around with their hair on fire, dousing themselves with sanitizer, wiping down groceries, and hiding under their sofas from the “invisible enemy.”

Back then, if you raised any doubts about closures, masks, forced separation, domestic capacity restrictions, or suggested it might not be the worst thing to keep businesses open, or were caught getting a haircut, you were shamed, shouted down, and banned by social media. You could even get fired.

Ask yourself: why the panic then and the calm now? What precisely has changed?

In those days, every new death–even every new case!–was blamed on the Trump administration. People even today say that Trump had no choice but to lock down because otherwise the criticisms would have been globally deafening. So Trump and his closest advisors sat in their Oval Office hothouse and listened to the wise council of Fauci that the only way to deal with a virus is to stop all human activity.

So here we are today, all nonchalant and casual about the whole thing even as the CDC chart on community spread looks like this right now. 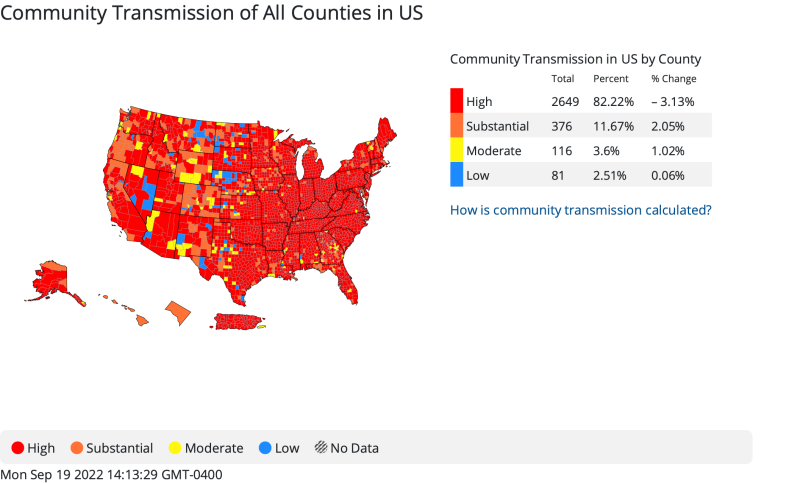 Receiving less attention was Biden’s immediate follow-up. “If you notice, no one is wearing masks. Everyone seems to be in pretty good shape.”

JUST IN – Biden: "The pandemic is over."pic.twitter.com/iS1gq31MD1

Hold on there a minute. Is it really all about such casual perceptions of one guy touring a car show?

If everyone was wearing a mask–the Biden administration is still appealing its right to impose a mandate–would it be evidence that the pandemic is still on? If so, might that help explain why the Biden administration was so intent on pushing for mass masking? It served the cosmetic purpose of whipping up public panic…for political and not medical reasons.

If that is true, we live in a dystopian world in which the government itself can create and uncreate a pandemic depending on the political priorities of the day.

As for the eyeball test that everyone Biden sees is “in pretty good” shape, that was true throughout the entire period of panicked and egregious statism. The demographic subject to medically significant outcomes was always very small. The 99.8 percent of people were always going to be in pretty good shape, but for the astounding psychological, economic, and public-health disaster imposed by the lockdowns themselves.

Yes, the “new virus” is now endemic and wholly manageable, due to mass infection and recovery. It was never going to end any other way. We knew this from February 2020. It’s the way every pandemic of this type of virus ends, all extremely well-documented over the past 100 years or, really, thousands of years.

The policy response to the pandemic is what was the outlier. After spending two and a half years watching the unfolding of the great public-health disaster of our lifetimes, it’s impossible to avoid the conclusion that this has always been about politics and the manipulation of public perceptions. The reality that we chose to see was heavily informed by media propaganda and political priorities.

For example, it’s impossible to avoid the observation that the pandemic response was motivated at least in part by the desire to drive Trump out of office.

What better way to crush a presidency than to panic the president himself into wrecking the economy that was his strongest selling point during a critical election year? It was a masterful plot and you don’t have to be a dreaded “conspiracy theorist” to see it.

Moreover, it was not just about Trump himself. It was about much larger agendas and directions that the administration was headed that threatened some very powerful interests, the investigations of which should consume years of work. Theories abound about the real reasons–Fauci and gain-of-function research, WEF and its agenda, an experiment in unleashing hipster techno-primitivism–and we are still a long way off from knowing the full truth.

It was perfectly obvious at the time that this was precisely what was going on. Why did observing the obvious become so completely unsayable?

In the same way, it is perfectly obvious that the new calm that Biden is hawking is all about creating an environment of normalcy leading to midterm elections just six weeks away. The Democrats obviously need every advantage. Declaring an end to the pandemic provides some help on the margin.

It should rattle any concerned citizen of the U.S.–or just any rational person–that such a massive issue as a deadly pandemic could be turned on and off by perception management by powerful elites in government, tech, and media. And yet, the evidence is overwhelming that we have seen just such an operation at work over these pandemic years.

Even now, despite more sophisticated data collection and distribution than we’ve ever had, we are at a loss to state with precision just how severe this pandemic truly was. Between wild inaccuracies of PCR testing plus rampant death misclassification, not to mention the ongoing confusions over infections vs. cases, there is no real consensus on the basic measurements one might need to make a scientific assessment.

To be sure, there are those who believe that the arrival of the Omicron variant is itself a good enough reason for the shift from panic to calm. The variant is said to be more prevalent but less severe. But this is a confusion: such variants do not arrive with a preset severity stamp on them, programmed to impact the population in a particular way. It always depends on preexisting immunities.

Whether and to what extent these viruses are nothing alarming or massively devastating is largely contingent on the immunological mappings of the population itself. It was exposure to previous COVID variants that resulted in less medically significant outcomes from the mutations that occurred later.

An isolated tribe in the Outback or Amazon rainforest that had never been exposed to any coronaviruses could face terrible disease and death from the variants that the developed world now regards as mild. For such people, Omicron could be just as devastating or more so than the original wild type. (I owe this point to the ever-brilliant Sunetra Gupta.)

In addition, one might suppose that the end of the panic would also mean the end of the restrictions and mandates. Not so. The state of emergency is still on. People are still being fired for refusing the vaccine. My unvaccinated friends from the UK, Australia, and Europe are still not even allowed into this country! The whole thing is outrageous and embarrassing.

And as Jonathan Turley has written:

Interesting phrase: the fluidity of pandemic policies. Keep in mind that most of the powers that allowed them to lock you in your home, quarantine the well, shut churches and schools, restrict travels, even prosecute people for holding parties, weddings, and funerals all still exist. There has been no rollback of any powers presumed by the CDC. Their website even now lays out their own quarantine plans for the next time.

There must absolutely be a serious challenge to all these government powers. They were abused for political reasons and ended up brutalizing the whole population here and around the world, in violation of all law and tradition. There have been no apologies from the top, only vague promises of reforms that end only in more centralization and funding. This must change before the whole disaster is repeated.

It is not enough for the president to declare an end. It does not end until we end the emergency powers and get an ironclad guarantee that nothing of this sort can ever happen again. One might suppose the Bill of Rights would have been enough but it was not. We need more. And it needs to be explicit and enforceable. That cannot happen until there is a full accounting of the outrages that have been visited upon the country. Only then can we say that everything and everyone “seems to be in pretty good shape.”

This article is republished with permission from The Brownstone Institute.