Southern-Fried Hebrew: Surprises and Lessons From a DNA Test

My name is Dr. Bob Dunn, and I come from Atlanta, the land of Chick-Fil-a, Coca Cola, and Braves baseball. I grew up in an evangelical Christian home and my family was from traditional British Isle stock and had been in the South since before America’s Founding. Or so I thought.

One day my wife bought me a 23andME DNA Ancestry Test Kit. The results came back a few weeks after I took it. “Oh, babe!” I could hear my wife gasp excitedly from the living room. Bursting into my office, she shoved the paper in my face while I was on a Zoom meeting. Reading it I saw “British-68.7 percent,” which was not a surprise. But the next part left me completely stunned: “Ashkenazi Jewish-29.7 percent.”

I texted my mother the results, and she asked if it was an error. But then she said that Dad was upset—crying, in fact. Gleefully, my brother suggested that Dad could now take solace in the fact that he was only a half-sibling to his very dysfunctional brothers and sisters. With that, a sober realization began to dawn on me.

I called Mom later that night. She had a resigned tone. Her upbringing was troubled, but my dad had a particularly tortured one. She handed the phone to my dad. He told me a story about a fight he had with his Aunt Jenny one night as a young man, when Aunt Jenny escalated the fight by yelling, “Well, you aren’t even a Dunn! You’re a Jew baby!” That fight had stayed in my dad’s mind all these years and now made sense. “The furniture store owner,” he said. “There is one name that always kept popping up: Noah Chayim Levinson.”

I saw my father’s mother, Edy, for the first-time last month when visiting my parents. She was beautiful in her younger years, before alcohol and the cares of life had taken their toll. Her father died when Edy was young, and her mother remarried, giving Edy an allegedly abusive stepfather. She grew up and met and married John Dunn, an illiterate man who made his living as a blue-collar employee working long hours at a battery plant. The two had four children, yet, by the late ’50s, their marriage was a turbulent, off-and-on whirlwind, and Edy found a job in a local convenience store.

Noah Levinson made it a habit of stopping at this convenience store in the evenings on his way home from his furniture store. Born into a respectable Ashkenazi Jewish family, Noah was an active member in his synagogue and was married to a Jewish woman named Abigail. After more than 10 years of marriage, though, Noah and Abigail were childless.

My dad had one memory of the furniture store owner. During one of her times of separation from John, Edy had invited Noah over to take the kids on a nice weekend drive in his fancy car. As they were driving, my then-four-year-old dad reached for a button on the dashboard that made a funny sound and everyone in the car laughed at his childlike curiosity. Noah put Edy in a nicer house, bought her a car, and made sure her needs were met.

But this quiet arrangement couldn’t last forever. One night, Abigail and several of her friends drove to my grandmother’s house and beat her up.

Edy left the family when my dad was 10. My dad was forced into an early adulthood, working multiple jobs, putting himself through trade school, and taking care of his own affairs.

John passed away in 2012 at the age of 89. His two oldest children were dysfunctional, his third child had committed suicide, and his fourth child got married and had her own life. Oddly, it was my dad who looked after John the most. He made sure his checks were signed and that he wasn’t cheated in business deals. He helped him build his retirement house, and when John was in the hospital at the end of his life, it was my dad who made sure his affairs were in order. John’s life without my dad would have been much worse than it was with him. 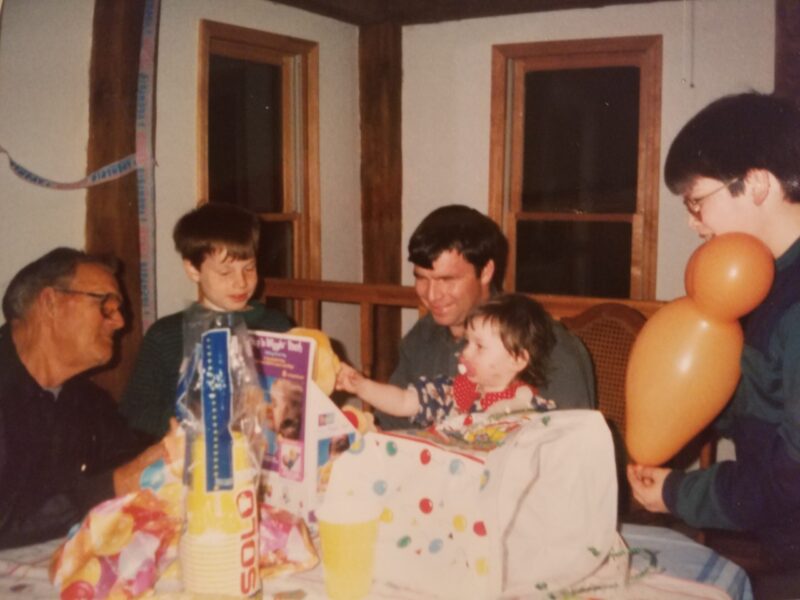 The author with his father (middle) and John (far left).

After my dad took his own 23andMe test, which confirmed our suspicions about his connection to the furniture store owner, my dad told me a story about helping John finish a tough building project decades ago. John put his arms around him and said, “That’s my boy.” John and Noah may have been antagonistic during the time in which their paths crossed, but Noah gave to John the son John needed in life. And John, in turn, raised the man who carries on Noah’s family legacy.

Although sad, this story reminds me of the story of Joseph in the biblical book of Genesis. When Joseph’s brothers sold him into slavery, his father Israel was nearly broken with grief. But God was working all things together for the good of His people, using even the evil actions of Joseph’s brothers to eventually raise Joseph to second-in-command in Egypt, enabling him to save his family and others from certain destruction during a seven-year famine.

As I look at my own son, I think about how, like Joseph, God’s providence played a role in bringing my family into existence. One day I will tell my son about his two great-grandfathers and how God used even sinful actions to bring about this present good result in our family. That same story should give us all hope. Even amid fatherlessness, crime, chaos, and the breakdown of society, God is working all things for His good purposes.