Chloe’s Story: Puberty Blockers at 13, a Double Mastectomy at 15 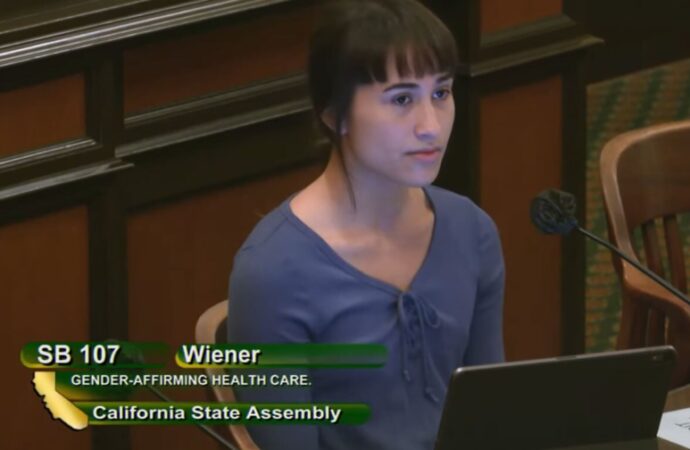 The California State Assembly has been studying a bill, SB 107, to declare the state a sanctuary for minors who have been denied transgender-affirming medicine and surgery elsewhere.

SB 107 would permit insurance companies, physicians, and contractors to disregard subpoenas about child custody if the child is being medically treated for gender dysphoria. It would also ban health care providers from providing medical information requested from another state if that state has a policy allowing civil action to be taken against individuals who perform “gender-affirming health care” on children.

A young California woman, Chloe Cole, has testified before legislators in her own state, in Louisiana, and in Florida about her experience at the hands of gender-affirming doctors. She began to transition to a male at 13; she had a double mastectomy at 15; and she detransitioned at 17. Her brief speech lays bare the iniquity of doctors and psychologists who exploit the confusion of children and adolescents.

This is the text of her address in Louisiana. It is heart-breaking.

My name is Chloe Cole, and I am from the Central Valley of California and a former transgender child patient. I am currently 17 years old and was medically transitioning from ages 13-16.

After I came out to my parents as a transgender boy at 12, I consulted a pediatric therapist in July of 2017 and was diagnosed with dysphoria by a ‘gender specialist’ the following month. The healthcare workers are trained to strictly follow the affirmative care system, even for child patients, in part because of California’s ‘conversion therapy’ ban. There was very little gatekeeping or other treatments suggested for my dysphoria.

When my parents asked about the efficacy of hormonal, surgical, and otherwise ‘affirming’ treatments in dysphoric children, their concerns were very quickly brushed aside by medical professionals. I didn’t even know detransitioners existed until I was one.

The only person who didn’t affirm me was the first endocrinologist I met. He refused to put me on blockers and expressed concerns for my cognitive development. However, it was easy to see another endocrinologist to get a prescription for blockers and testosterone, just like getting a getting a second opinion for any other medical concern. After only two or three appointments with the second endocrinologist, I was given paperwork and consent forms for puberty blockers (Lupron) and androgens (Depo- Testosterone), respectively. I began blockers in February of 2018, and one month later, I received my first testosterone shot. I received Lupron shots for about a year.

After two years on testosterone, I expressed to my therapist that I was seeking top surgery, or the removal of my breasts. I was recommended to another gender specialist, who then sent me to a gender-affirming surgeon. After my first consultation with the surgeon, my parents and I were encouraged to attend a ‘top surgery’ class, which had about 12 Female-to-Male (FTM) kids. I was immediately struck by how early some of them seemed in their transition and how some were much younger than I was; I was 15 at the time and had been transitioning for 3 years.

In retrospect, the class inadvertently helped to affirm my decision because of the sense of community provided by seeing girls like me going through the same thing. Despite all these consultations and classes, I don’t feel like I understood all the ramifications that came with any of the medical decisions I was making. I didn’t realize how traumatic the recovery would be, and it wasn’t until I was almost a year post-op, that I realized I may want to breastfeed my future children; I will never be able to do that as a mother.

The worst part about my transition would be the long-term health effects that I didn’t knowingly consent to at the time. I developed urinary tract issues during my transition that seem to have gotten worse since stopping testosterone. I have been getting blood clots in my urine and have an inability to fully empty my bladder. Because my reproductive system was still developing while I was on testosterone, the overall function of it is completely unknown. I have irreversible changes, and I may face complications for the rest of my life.

I was failed by modern medicine.

Did Chloe give informed consent to these life-changing procedures? Is her experience really different from the atrocities committed by German doctors at Auschwitz or American doctors in the Tuskegee syphilis studies?

This article is republished with permission from Mercatornet.