American morality is in decline, and the population is starting to take note. Half of Americans—a record high number—now rate U.S. morals as “poor,” according to a recent Gallup poll. “Consideration of others” is the leading indicator of this moral decline, Americans say, followed by “racism/discrimination.” 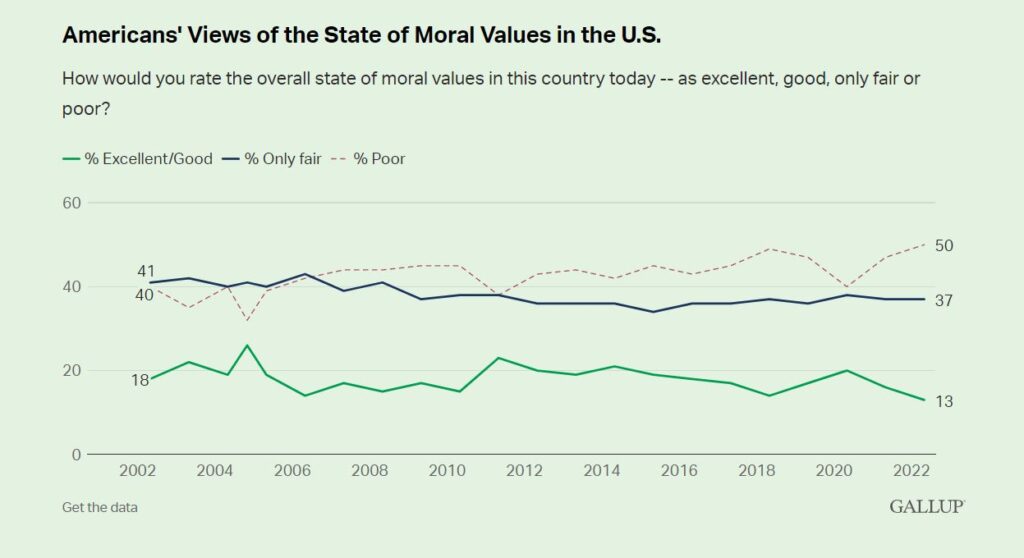 Yet we really didn’t need a poll to tell us about this decline in morality. The increase in carjackings and violent crimes tell us that, as does society’s fixation on deviant sexual practices and on self-absorption in general. The decaying morality of culture is enough to make any person who is just trying to live a decent, honest life throw in the towel and say, “That’s it, it’s gone, there’s nothing I can do about it!”

But such a response gives up far too easily and before the fight is over. There is a solution to the decay of our nation, and it was laid out by one of our Founding Fathers in the first year of our independence from Britain.

Speaking in his 1776 sermon, “The Dominion of Providence Over the Passions of Men,” Declaration signer John Witherspoon noted that “Nothing is more certain than that a general profligacy and corruption of manners make a people ripe for destruction.” Such destruction may be prevented if a good government is in place, he said, but only for a time, for “beyond a certain pitch, even the best constitution will be ineffectual, and slavery must ensue.”

Many in America may well wonder if we have gone beyond that certain pitch, for some elements of slavery—or a lack of freedom—seem to proliferate across our nation through the laws that are passed, through the speech that is hindered, and through the ideologies that are forced upon us. Likewise, enemies threaten to oppress us, whether they are abroad in countries such as China or closer to home at the open Southern border or even in our local neighborhoods, where inflation eats our earnings and threatens to starve us into submission to those who create the inflation in the first place.

But there is a way to thwart such enemies and escape out of slavery, Witherspoon told us. “When the manners of a nation are pure, when true religion and internal principles maintain their vigour, the attempts of the most powerful enemies to oppress them are commonly baffled and disappointed.” This is not some simpleton religious mantra or naivete, Witherspoon assures us; rather, it is something that nature itself confirms.

Witherspoon maps out the path:

[H]e is the best friend to American liberty, who is most sincere and active in promoting true and undefiled religion, and who sets himself with the greatest firmness to bear down profanity and immorality of every kind. Whoever is an avowed enemy to God, I scruple not to call him an enemy to his country. … It is therefore your duty in this important and critical season to exert yourselves, every one in his proper sphere, to stem the tide of prevailing vice, to promote the knowledge of God, the reverence of his name and worship, and obedience to his laws.

Our culture tells us that religion stinks and that those who follow God and His laws of morality are prudes and bigots who must be disposed of as quickly as possible. But as Witherspoon told us, it is those who stand firm on following God’s laws—teaching them to others as well—who have the power to save a nation about to slip into the abyss. Simply living in a right way ourselves—going to church, walking in right relation with God, being honest in our business practices, raising our children to be kind and respectful—and then encouraging others to do the same will go a long way toward “stem[ming] the tide of prevailing vice.”

The solution to reversing America’s moral depravity is simple: start with ourselves. When each of us personally holds to good and high morals, walking in God’s ways, those ways can’t help but spread to others.