When the Rule of Law Ends, Tyranny Soon Follows 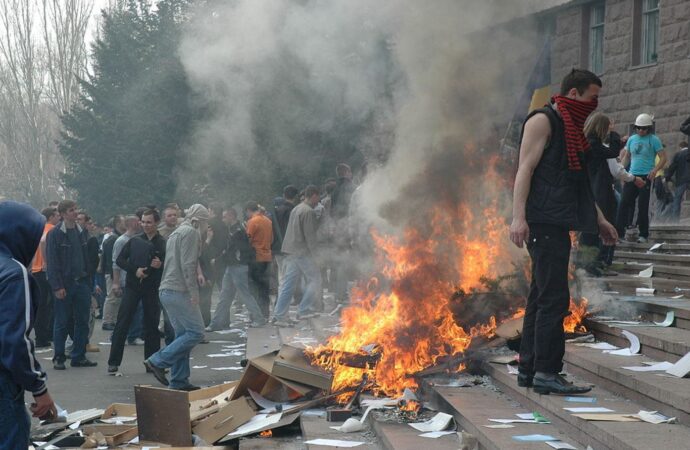 The rule of law in our country is buckling under the weight of those who seem intent on its destruction.

We are fast becoming a nation without laws.

Rioters associated with Antifa and Black Lives Matter burned and looted some of our cities in the spring and summer of 2020, occupied the streets, and even committed murder, often with few, if any, consequences. In some cities, thieves and thugs apprehended by the police are released the same day to return to the streets. In the last 17 months, our government has permitted millions of people to illegally walk into our country via the southern border. Meanwhile, some protesters who entered the U.S. Capitol on Jan. 6, 2021 remain incarcerated after months.

The charade seems inexhaustible. The Jeffrey Epstein episode, in which he brought together underaged girls and prostitutes with wealthy men, has disappeared down the sinkhole of memory. The John Durham investigation of “Russiagate” will likely drag on until Hilary Clinton lands in a nursing home. And Hunter Biden’s laptop with its pornography, its evidence of bribes, and its revelations concerning his family’s financial ties to China and Ukraine? Forget about it.

And now the president and the Department of Justice have allowed mobs of protesters to gather at the homes of Supreme Court justices demanding the justices reverse their possible decision about overturning Roe v. Wade. By indulging in this act of intimidation, these demonstrators are committing a federal crime. Attorney General Merrick Garland and the Justice Department did finally issue a vaguely worded order promising more protection for the justices, although it didn’t come until May 11. These same culprits attacked Catholic churches on Mother’s Day, actions which are also illegal, and firebombed a prolife center in Madison, Wisconsin.

Here in Virginia this past week, someone fired at shot into the offices of our Attorney General, Republican Jason Miyares, presumably because he stood against the invasion of churches and because he wants the protestors at the justices’ homes arrested. Writer Nick Arama delivers a bitter but humorous take on the Washington Post headline reporting this incident: “Bullet goes through window of Virginia attorney general’s offices.” Those nasty bullets. They just think they can go wherever they want.

In the meantime, this same government, which has so often dodged the truth and refused to uphold our laws, has instituted, and expects us to trust, a Disinformation Governance Board. Now that’s chutzpah!

This neglect of the law is not an oversight. The motives of those responsible may be vague and hazy, but the intent certainly seems deliberate. Otherwise, the authorities would put an end to these criminal activities. They would close our border, arrest and appropriately charge the criminals in our cities, and restore law and order to our streets and cities.

Those among us who are holding our breath until the next election, hoping for a sea-change in policy, need to look at our pack of current legislators and ask ourselves what measures they have taken to end this lawlessness. We also need to remember that those elections are still six months away. Given the decline of the law in recent months, what will be the state of our legal system by the time November rolls around?

A simple axiom is at work here: When the rule of law ends, chaos begins, and tyranny follows.

Right now, the rule of law in our country is buckling under the weight of those who seem intent on its destruction. Unless the left reins in their radical street troopers, or unless our local, state, and federal governments step up, do their duty, and crack down on crime, we can expect a long and violent summer.