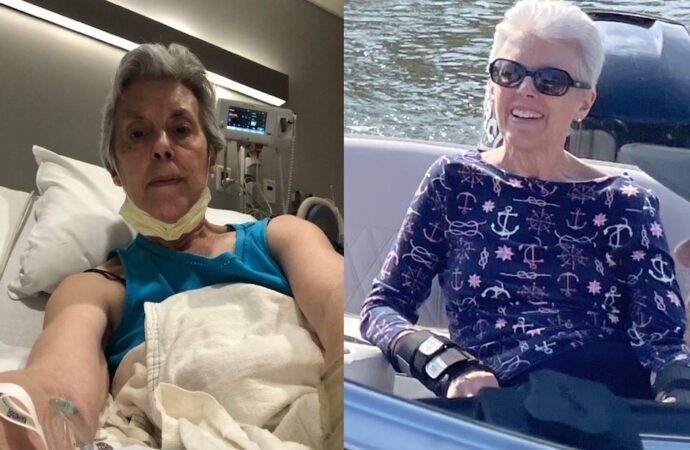 Kristie Estes was a thriving and strong individual … and then she got the COVID vaccine.

Kristie Estes is a 67-year-old retired communications professional who turned old before her time. The wife and mother of three adult children was a strong lady before she got the jab. She cleaned house and did yardwork and went to kettle bell class three times a week.

But life changed after she got her first COVID vaccine shot on Feb. 27, 2021. Now she has crippling muscle and joint weakness, severe carpal tunnel syndrome, stiff joints, an unsteady walk, weak muscles, and other weird symptoms.

“Three days [after the shot] I had a splotchy spot on my right arm that I noticed in kettle bell class,” Kristie said, noting that she’d read about such a reaction occurring among some vaccinated people. After her second shot on March 27, 2021, she soon felt weakness in her legs. “It was like restless leg syndrome, but real painful,” she said.

Two weeks later, she was getting into the tub and noticed her toes wouldn’t bend. Shortly after, they turned black and blue. “Then I noticed I couldn’t easily move my arms back—I kept saying I felt stiff,” she said.

On April 30, 2021, she woke up in the middle of the night. “My hands were in terrible pain—they cramped up and I couldn’t use them,” Kristie said. Her body was inexplicably breaking down—failing in ways she’d never known before taking the vaccine.

In August 2021, Kristie visited a rheumatologist, who told her that she probably had rheumatoid arthritis. Later, he called her back regarding some tests and told her she had myositis, a group of diseases characterized by inflamed muscles, which can cause prolonged muscle fatigue and weakness. Her official diagnosis is polymyositis with bilateral carpal tunnel.

Kristie has had two surgeries for the carpal tunnel syndrome, but they didn’t fix the problem. Currently, she is at about 30 percent normal dexterity, with greatly diminished strength. “I’ll have to take strong medications the rest of my life…. They relieve some of the pain,” she said. She has a IVIG transfusion monthly.

She recently began physical therapy for her walking and balance and soon will start the same for her hands. “It’s helped,” she said. “My ankles, knees—this disease affects every muscle.”

Of course, all these unexpected medical treatments don’t come without cost. Fortunately for Kristie, Medicare has approved the costly IVIG transfusions. Her private medical insurance also mitigates some of the expense.

Besides being costly, these medical troubles are discouraging. Kristie has moments when she’s down and fearing the worst. “I’ll think—if I ever have grandkids, will I be able to hold them?” But she copes, adding, “I just deal with it.”

Asked if she believes in God and how she stays hopeful, Kristie responds quickly and in an upbeat tone: “I certainly do. I’ve had things happen in my life—I think sometimes you have to go through things, and it makes you stronger,” she said.

Staying in touch with others facing the same struggles also helps. Her husband connected her to Team Humanity, a large online support group for the vaccine injured.

“We need to be acknowledged and studied,” she said of herself and her growing group of vaccine-injured compatriots. “There needs to be programs to help those who are financially hurting from this,” she said. “Money is spent on increasing booster shots, but there’s nothing for the vaccine-injured.”

Kristie would also like to see congressional hearings on the vaccine-injured—hearings that would be bipartisan and thoughtful, and which would make progress on the problem. “It’s going to keep happening—the process needs to change,” she said. “They don’t even [currently] have a study of how effective the COVID vaccine was.” She added that the government should want to know the answers and should be supporting the spread of information on the problems of the vaccine-injured.

Kristie also would like more people to simply recognize and empathize with vaccine-injured people—including the mainstream media. “Our lives have changed, and we complied with getting the vaccine,” Kristie said. “They want to avoid us, because it’s uncomfortable—acknowledging the vaccine-injured implies there’s a problem with Big Pharma and Big Government.”

Editor’s Note: Have a vaccine-related story that you would like to share? Email our editors at [email protected] with your contact information and a brief description of your experience to help our editors with the selection process.