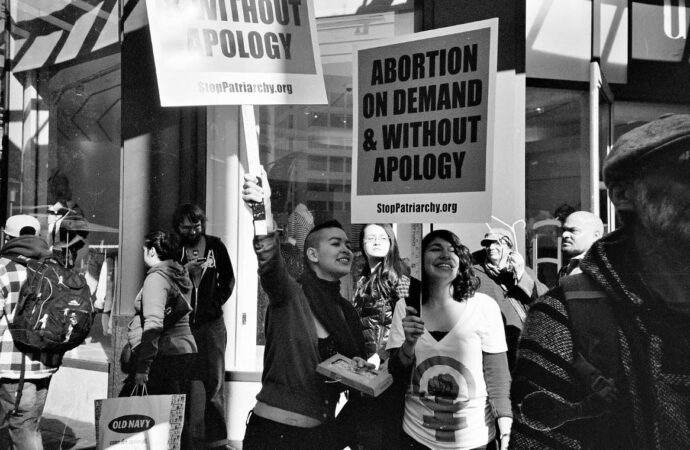 Question the timing of the release of the SCOTUS draft? It would be irresponsible not to do so. Survey the political landscape.

Left-wing abortifa agitators descended on the Supreme Court steps in Washington, howling, “Fascist scum has got to go.”

Unhinged TikTokers called for “riots,” “gas” and “torches”; “burning it all to the ground” by targeting “all those old white men and the women who support them”; and “mayhem in the streets” that will dwarf the “global protests around George Floyd.”

The aborticrats are not just nuts. They’re evil.

An “anarchist collective” is now instructing women (yes, all of sudden, the left has discovered that biological women are really a thing) how to concoct “do it yourself” abortion pills with horse ulcer powder, corn syrup, and confectioners’ sugar. (Yes, these are the same types who made it a punishable offense to talk about alternative COVID-19 treatment ivermectin, the anti-malarial drug used safely for three decades around the globe by humans and animals.)

Right on cue, anti-Christian hatred spread like a raging Colorado wildfire across the internet, from the profane, abortion-promoting rabbi who fumed, “Shame on all who hold the cross” and, “Time to go to war” to thousands of his fellow online vigilantes posting, “F— Christians” with veiled or outright threads of violence.

Planned Parenthood and the American Civil Liberties Union were at the ready in Washington, D.C., Philadelphia, and New York City’s Foley Square for “impromptu” protests and literal screamfests, where masses of spontaneously gathered rabble-rousers carried spontaneously printed, carbon-copy signs from the billion-dollar-funded giants of the Death Lobby. (So much for that “paper shortage” being used to justify ditching traditional paper ballot voting, right? Told you so.)

Question the timing? It would be irresponsible not to do so. Survey the political landscape. Earlier this week, left-wing NPR reported that President Joe Biden “is losing support from Gen Z.” The libs in deep-blue Massachusetts are sick of him, too, according to a new Boston Globe/Suffolk University poll. Another lib outlet, government-sponsored PBS, reported last week that “independents favor the GOP right now” because “runaway inflation is hitting everyone’s wallets and has given Republicans a political edge”; pollsters also found that “about half of parents with children under age 18 said they don’t like how (Biden) has handled COVID.”

Despite the Herculean attempts of the White House, Black Lives Matter, and woke media to gin up fear over “white supremacy” as the biggest threat to our nation, unbrainwashed citizens are revolting en masse against anti-white critical race theory in higher education and “social and emotional learning” (translation: thought control and behavior modification) in K-12 schools. BLM’s multimillion-dollar grift has now hit mainstream exposure. And the Biden Disinformation Governance Board, headed by TikTok warbling bubblehead and Hunter Biden laptop-whitewasher Nina Jankowicz, has become a laughingstock across the board.

The engineered and coordinated aborti-mania also comes at an opportune time for Biden’s Big Pharma allies. Just this week, a new study has documented more COVID-19 vaccine-induced heart infections. New surveillance data from the Vaccine Adverse Event Reporting System confirms a “statistically significant increased risk for Guillain-Barre syndrome (GBS) in the three weeks after receipt of the Janssen/Johnson & Johnson COVID-19 vaccine.” And profiteering Pfizer, which is pushing Biden to approve COVID-19 shots for children under five, was forced to release more than 90,000 pages of jab data it tried to cover up.

Make no mistake: There are no coincidences, and conspiracies are not just theories, especially in an even-numbered election year with a crumbling, bumbling commander in chief and his minions clinging to power.