The Swindle of Mass Testing and Schooling 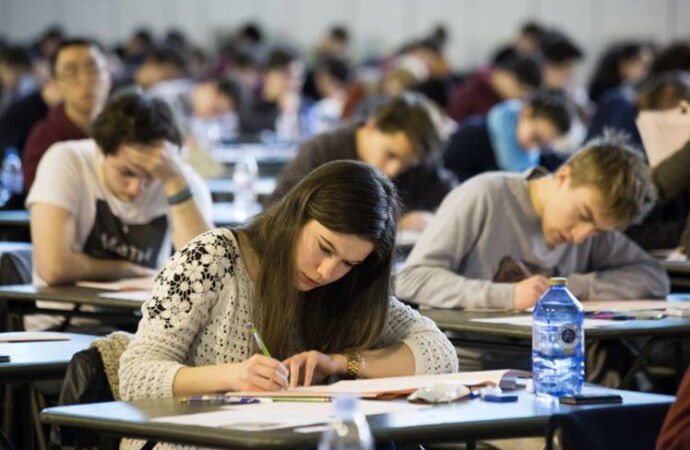 In the last few years, I’ve heard a lot of complaints that doctors don’t do real doctoring anymore. They do blood work and run various other scans and tests, but they often can’t seem to figure out the problem if a patient doesn’t fit the cookie-cutter mold that those tests and scans can diagnose.

A similar thing is happening in today’s education system. Politicians, teachers, and other experts—the education doctors so to speak—all run madly around trying to figure out why our kids are performing so dismally in school, using Test XYZ or employing big data to track their progress. And like the doctors, such emphasis on tests and tracking often misses the real problem with today’s education system: mass schooling is one big hustle—or swindle—that can often hurt children more than it helps them.

A recent example of this is education expert Michael J. Petrilli’s latest education proposal in the Winter 2022 edition of Education Next. Likely well-meaning, Petrilli suggests that we begin giving national standardized tests to children in kindergarten instead of fourth grade as is the current case. Quick to assure us that such tests wouldn’t be the classic fill-in-the-bubble pages of monotony that many think of when they hear the phrase “standardized test,” Petrilli offers several reasons for his argument.

First, testing in fourth grade under the National Assessment of Educational Progress (NAEP) is too late, Petrilli says, leaving us blind as to what is truly going on in those first years of school. Second, he argues that technology is much more viable these days, and as such, we should be able to sneak simple tests onto iPads and other devices while children are happily playing around on screens. Third, he argues that the early grades are most important for a child’s development and that testing them will help educators give children a better foundation and enable them to see why so many children seem to be diminishing in their academic ability over the years.

There may be grains of truth to these arguments, but they raise other questions. For starters, why does the government need to know what’s going on with a child at such a young age? Such an assumption signals that the public schools, not the parents, are responsible for the proper growth and training of children, which, last I checked, is not the case.

Furthermore, the idea that technology is a big help in promoting these early tests and sneaking them past kids seems suspect. It’s no secret that keeping children away from screens helps them to be more intelligent and creative. If that’s true, then why would we want to encourage little kindergarteners to be on the very devices that harm them, just so we can test them to find out what the hindrances are to their academic advancement?

Finally, yes, it’s true that the early years are important, but if they’re so important, then why do we bottle children up in schools at such a young age and expect them to jump through all the hoops of institutionalized schooling and testing? It used to be that the ancients didn’t begin formal schooling until a child was around age seven. Even American schools a century ago didn’t start schooling children at such a young age, a fact that didn’t seem to harm children at all, judging from the advanced curricula they used in later grades.

Unfortunately, shoving testing down children’s throats at such a young age is the only way today’s education experts seem to know how to diagnose the problems in today’s schools. Former New York Teacher of the Year John Taylor Gatto had a more common-sense diagnosis arrived at by simple observation: “Mass schooling damages children,” he wrote.

We don’t need any more of it. And under the guise that it is the same thing as education, it has been picking our pockets just as Socrates predicted it would thousands of years ago. One of the surest ways to recognize real education is by the fact that it doesn’t cost very much, doesn’t depend on expensive toys or gadgets. The experiences that produce it and the self-awareness that propels it are nearly free. It is hard to turn a dollar on education. But schooling is a wonderful hustle, getting sharper all the time.


Gatto is right. If we want to increase our children’s knowledge, understanding, and creativity, then the path isn’t through increased testing run in mass schooling. No, the way is through taking it on ourselves, talking with our children, spending time with them, encouraging their creativity, and keeping them as far away from the cookie-cutter government schools as possible.

Mass schooling and the testing it promotes as a path to increased education is a swindle. Don’t let your children fall prey to it if you want them to be set apart from the herd as truly educated, intelligent individuals.