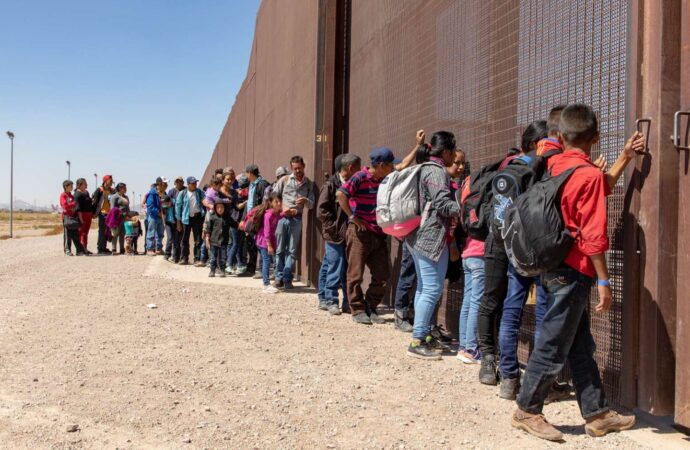 Our country is being invaded, and our government is leading the way.

That the Biden administration is willfully destroying the United States can no longer be in doubt.

Under the direction of the president and his advisers—whoever they are—illegal immigrants are pouring across our southern border. Demonstrating this invasion of America are a variety of graphs from Pew Research Center. “The U.S. Border Patrol reported more than 1.6 million encounters with migrants along the U.S.-Mexico border in the 2021 fiscal year, more than quadruple the number of the prior fiscal year and the highest annual total on record,” the article notes. Those encounters, of course, don’t include migrants who slipped past the Border Patrol.

Now, here’s where it gets weird: No one in the federal government has sufficiently explained why this crisis is allowed to continue.

It’s not to rescue these migrants from danger; saving a few exceptions, they aren’t fleeing their countries for that reason.

Some speculate that they are being recruited to vote for the Democrat party, while others tell us that our border policy is an act of generosity and mercy aimed at helping the world’s oppressed. Indeed, many are flocking to the U.S. in search of better jobs and lives, which is understandable, even though they are breaking the law; others are hopeful that the United States will provide them with various benefits.

But no one ever tells us how these waves of illegal immigrants benefit the American people. In fact, anyone with half a brain can look down the road and see the repercussions of these unlawful entries: higher taxes for social services and schools, more crime, and even a heightened danger of terrorism. The job market for lawful citizens will likely shrink while the demand for housing, food, and gasoline, all in the middle of skyrocketing inflation, will likely just get higher.

One would hope that our government is not trying to benefit the drug cartels, although the latter do make big bucks facilitating migrant entries. The cartels are also operating sex and drug rings, and so are daily gaining strength and power. Sooner than later, we can expect these gangs to be heavily embedded in the U.S.—if they’re not already—bringing our country even more crime and violence.

Meanwhile, a solid majority of Americans oppose President Biden’s policy of open borders. The Center for Immigration Studies reports that a Harvard-Harris poll found that 80 percent of U.S. citizens believe the border surge is “a crisis that needs to be addressed immediately,” and that was a year ago. Sixty-eight percent of those polled said that illegals entering the country should be turned back.

Yet the Republican party seems to have gone missing in action on this issue. A few of them have spoken out against the Biden agenda, but many of our senators and representatives lack the necessary vigor and a press willing to report on this crisis to make their opposition stick.

It is true that some bipartisan pushback has developed in the face of President Biden’s decision to do away with Title 42, which the Washington Examiner describes as “the pandemic edict allowing for the blanket expulsion of migrants entering the United States at the southern border.” Lifting Title 42 is guaranteed to bring a massive surge of immigrants seeking to enter America. Across the country, large numbers of Republicans, Independents, and even Democrats oppose Biden’s proposal.

Despite this opposition, however, the federal government forges ahead, seemingly determined to end forever any U.S. sovereignty over its own border. Those of us who have children and grandchildren are sickened when we look at the consequences of this foolish immigration policy.

Some have hung their hopes for a sea-change on November’s elections, believing that electing more Republicans to the Senate and the House will turn these policies around. But given the tepid Republican response so far to these catastrophes, I won’t be holding my breath. Besides, those elected in November won’t take office until January, which means the reckless, senseless policies of the Biden administration will continue at least until then.

Our country is being invaded, and our government is leading the way.