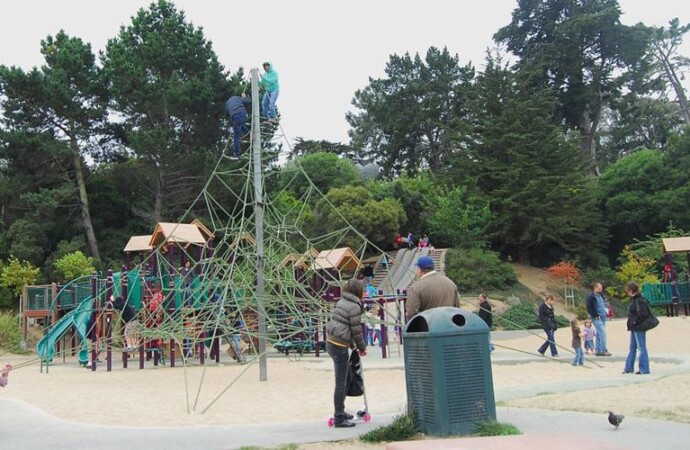 The signs on every playground in my city, New York, say this: “Playground rules prohibit adults except in the company of children.”

Apparently, any adult who simply wants to watch kids at play could be a creep, so let’s just ban ’em all. Trust has been replaced by disgust.

There was a case here a few years back when seven chess players playing outside at a park were fined for … wait for it … playing chess. Their chess tables—concrete ones, placed there by the city—were deemed too close to the playground, so the men were booted.

The reality of the situation—the men’s kindness—didn’t matter. All that mattered were the fantasies conjured up by “what if?” thinking: What IF they turned out to be monsters?

By separating the generations this way, we are creating a new society, one that actively distrusts any adult who wants to help a kid other than his own. Compare this anxiety with what goes on in Japan. There the kids wear brightly colored hats, often yellow, their first year of school—kindergarten.

“Doesn’t that put them in danger?” asked a friend I was talking to about this. To her, a kid who calls attention to himself is a kid who could be attracting a predator. It’s like she really thinks kids should play outside in camouflage.

But attracting adult attention is exactly what the hats are supposed to do. In Japan, the assumption is that the easier it is to see children, the easier it is for grown-ups to look out for them.

Which brings me to the flip side of our obsession with stranger danger: The idea that any time a parent lets her kids do anything on their own, she is actually requiring the rest of us grown-ups to “babysit” them, for free.

This is the reason some stores won’t let kids shop alone until a certain age. A viral story from Canada concerned an 11-year-old who was detained by the staff of the Lego store because he was shopping there without a parent. It didn’t matter that he had come there with his own money, intending to buy the Legos he loves, and it didn’t matter that he was perfectly well-behaved.

All that mattered was that a store employee deemed him an unbearable burden. The manager had him detained until his father could come pick him up.

While this detention outraged many people, a significant contingent sided with the store, saying that employees shouldn’t have to “babysit” a kid.

But in fact, no one did have to babysit him. He was just a person in public, albeit a young one.

If some problem had come up—say he poked himself in the eye with a tiny Lego sword—well, then, yes, some adult may have had to come to his aid. But that is not babysitting! That is one human being helping another.

Most kids walking to school or playing in the park are not going to need major assistance from anyone, adult or otherwise. But if they do, I’d like to think most of us would give it ungrudgingly. Their parents have not foisted a huge burden on society by letting their kids be part of it.

Kids out and about in the world are just that: kids, out and about. Not a big, unpaid job for the rest of us.

I’m not sure about the hats, but Japan has the right idea. Looking out for everyone beats trusting no one.