Swine Flu Was Far More Deadly to Children Than COVID-19 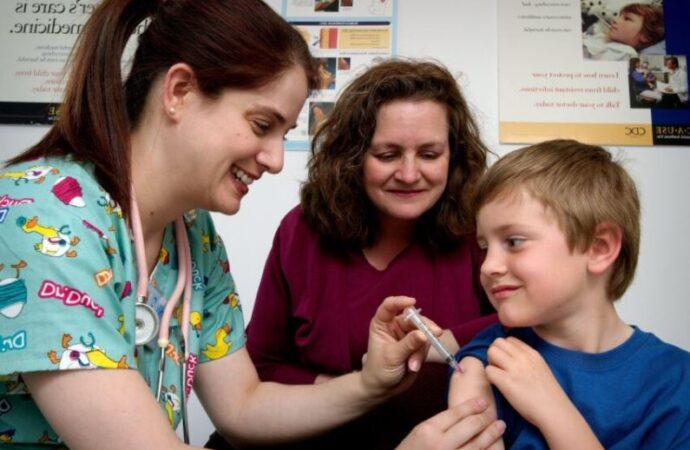 New York City Mayor Bill de Blasio this week announced he is considering requiring children as young as five years old to demonstrate proof of vaccination to enter private establishments, such as restaurants and gymnasiums.

Though New York City only began making vaccinations available to children a week ago, the outgoing mayor said he’d like to have a plan in place for incoming mayor Eric Adams.

Adams, who recently announced he hopes to soon end mask requirements in schools, may have less enthusiasm for mandates than his predecessor. But New York is not the only city pushing for proof of vaccination for children.

Last week, San Francisco lawmakers announced their plan to extend vaccination passport requirements for children 5 to 11 years old, “the first major U.S. city to do so,” NBC News reports. The vaccine passports would apply to children seeking to attend private establishments such as restaurants, gyms, and sporting venues.

“We definitely want to wait and make sure that children have an opportunity to get vaccinated,” San Francisco Health Officer Dr. Susan Philip said during a town hall. “That will happen no sooner than about eight weeks after the vaccine is available to kids. So there will be a limited time in which there will not be those requirements, but then at some point, 5 to 11-year-olds will also have to show proof of vaccination to access some of those same settings.”

‘The Kids Are Safe’

COVID-19 is a serious and deadly virus. Official government statistics show the virus has claimed no less than 5 million lives since the pandemic began, including 778,000 American lives.

Ample evidence, however, shows children have by far the least to fear from COVID-19. And it’s not even close.

“The kids are safe. They always have been,” journalist David Wallace-Wells wrote in New York magazine in July. “It may sound strange, given a year of panic over school closures and reopenings, a year of masking toddlers and closing playgrounds and huddling in pandemic pods, that, according to the CDC, among children the mortality risk from COVID-19 is actually lower than from the flu.”

It’s not just the flu, however. The CDC’s own data also show children are more likely to die from cancer, drowning, homicide, and suicide than COVID-19. (Note: the extent of the health risk varies based on the age group.)

In fact, if you compare COVID-19 to previous viruses, the coronavirus is far less deadly to children.

COVID-19, on the other hand, resulted in nearly 27 million infections in children between February 2020 and May 2021, causing 332 deaths. This means COVID had an infection fatality ratio of 0.0012 percent.

In other words, the data suggest swine flu’s infection fatality rate in children was more than 5x higher than that of COVID-19. Put another way, the 1,282 lives swine flu claimed in that single year is nearly double the 645 COVID deaths among U.S. children during the entire pandemic. The 645 deaths figure is also well below that of a nasty flu season, such as 2012-2013, when influenza claimed 1,161 children (0-17), according to the CDC.

Some may contend that some of these data ranges exclude the Delta variant, which many had hypothesized was more deadly to children. This thesis, the Associated Press reports, is not backed up by the data.

“Experts say there’s no strong evidence that it makes children and teens sicker than earlier versions of the virus, although delta has led to a surge in infections among kids because it’s more contagious,” the AP reports.

An abundance of new medical research confirms these findings. Lucy McBride, a practicing internist in Washington, D.C. who writes for The Atlantic, recently pointed out the Delta variant doesn’t appear to “target kids,” as some feared.

“Although cases are certainly increasing among children as well as adults, a recent report by the American Academy of Pediatrics shows that 0.9 percent of COVID-19 cases in children have resulted in hospitalization—a slight increase since the spring but well below the corresponding percentage for most of last year—and 0.01 percent have resulted in death,” writes McBride. (The discrepancy from the CDC’s figures appears to stem from the fact that the government used estimated cases, while the American Academy of Pediatrics study used confirmed cases.)

A recent peer-reviewed study in Britain of nearly 260,000 children (1,700 of whom showed symptoms) reminds us that for most kids, a coronavirus infection will manifest as the common cold—if anything. Also reassuring is that only 4.4 percent of children diagnosed with COVID-19 in this study had symptoms after 28 days (and 1.8 percent after 56 days). Probably not surprising to any parent, about 1 percent of kids in this study who had upper-respiratory symptoms and tested negative for COVID-19 also had lingering symptoms at 56 days—a reminder that COVID-19 is only one potential cause for a child’s malaise.

Abundant evidence indicates that coronavirus transmissions rates in schools are roughly equal to or less than those of the surrounding community. In other words, educational settings are not inherently dangerous for younger children.

Despite the evidence that COVID-19 poses a minuscule risk to children, there is a widespread effort to vaccinate them.

In some cases, children are being paid $100 by taxpayers to receive a shot. Influencers such as former news anchor Dan Rather have turned vaccinating children into a moral crusade. And as previously mentioned, many cities are passing laws that will require children to have a vaccine passport to eat in a restaurant, go to a movie theater, or attend a Knicks game.

The question is, why? There are probably a multitude of answers to this question, but one would seem to be this: Americans continue to be wildly misinformed about the COVID-19 risks.

As I noted in May, studies have shown that an astonishing percentage of Americans—41 percent of Democrats, 28 percent of Republicans, and 35 percent of independents—believe a COVID-positive individual’s risk of being hospitalized is 50 percent or higher. Researchers of the study in question—conducted by Franklin Templeton/Gallup—admitted we don’t know the precise percentage of people who have been infected who require hospitalization, but said the best available estimates put the figure between 1 and 5 percent. In other words, anywhere between 10x and 50x lower than respondents believed.

That study was conducted way back in December. It’s hard to believe, many might say, that Americans are still so misinformed about the true risks of COVID-19. But their thinking may be distorted by a powerful emotion.

In his celebrated book Dune, which recently was adapted into a feature film available in movie theaters and for streaming on HBO, the author Frank Herbert observed the destructive power of fear.

‘I must not fear. Fear is the mind-killer,” the story’s hero Paul Atreides says to himself. “Fear is the little-death that brings total obliteration.”

While it’s natural to fear danger, Herbert was correct about its destructive power; and we saw ample evidence of this during the pandemic. Lockdowns, hygiene theater, and stay-at-home orders were all, to varying degrees, either mostly useless or positively destructive, but the common link they shared was they all stemmed from fear (which often was stoked by reckless and sloppy journalism).

Early in the pandemic, many Americans (and their political leaders) opted to sacrifice civil liberties out of fear, hoping it would make them safer. As FEE’s Sean Malone noted in an episode of Out of Frame (see below), this tragically is a common reaction during social panics.

“When people feel fear, they’re much more willing to accept anything that makes the world seem a little safer,” Malone explains.

I’ll offer no opinion as to whether a parent should or should not vaccinate their children, but I will say my 10-year-old daughter got COVID in October. Her symptoms were some fatigue, a few body aches, and a low-grade fever which she experienced for about a day. The next day she was doing flips on the trampoline in our backyard.

How parents choose regarding the vaccination of small children is up to them. But it’s important to understand that only parents, not the state, can morally make this decision.

That said, I’d encourage parents to know the actual risks of COVID-19 before making their choice—and to reach their decision based on knowledge, not fear.