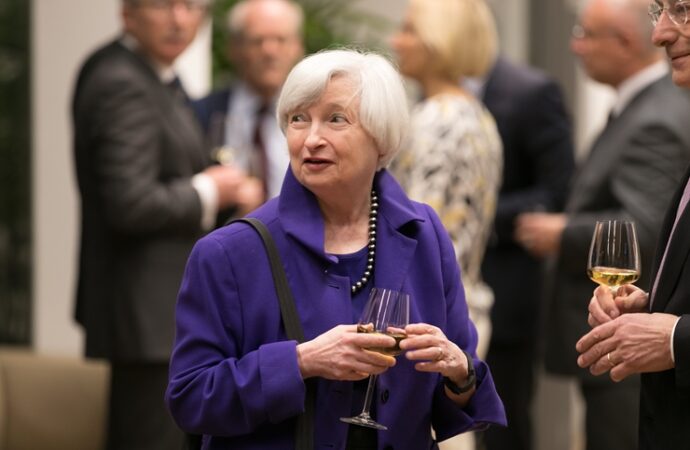 Last Friday, in a triumph for transnationalism, 136 nations, including the U.S., agreed to mandate a global corporate income tax for all nations that will not be allowed to fall below 15 percent. “Virtually the entire global economy has decided to end the race to the bottom on corporate taxation,” said Treasury Secretary Janet Yellen, who negotiated the pact. Betraying a nervousness as to how such a minimum corporate tax, dictated by globalists, will be received in Congress, Yellen urged that it be adopted “swiftly.” Yellen is right to be nervous.

The tax proposal is a giant leap forward toward a globalism that America has rejected, and its defeat should be made a priority of libertarians, conservatives, populists, and nationalists alike.

What is this “race to the bottom” that so terrifies Yellen and her globalist allies? Simply the worldwide competition of independent nations to offer lower tax rates to entice successful companies to relocate to their shores and bring their jobs with them. Yellen’s “race to the bottom” is as American as apple pie.

High tax rates, corporate and personal, in states such as New York, New Jersey, Illinois, and California have proven to be incentives to companies to pick up and relocate to low-tax states such as Texas and Florida.

Why would free-market and free-enterprise Republicans vote to lock into U.S. law a corporate tax rate dictated by agents of the New World Order? To sign on to this 15 percent minimum tax would be to surrender our freedom of action to set our own tax rates in accordance with the values and beliefs of the party and administration the people vote into power.

Why would a great nation, especially this nation, agree to give up its freedom of action and have its surrender written into its national law and ratified by treaty? Why forfeit a sovereign right to cut corporate taxes when and to whatever level we wish? Why deny ourselves a competitive advantage that can be gained by unilaterally cutting corporate tax rates?

Assume the rest of the world embraces this minimum corporate tax of 15 percent and the U.S.—to recapture and restore a manufacturing base we gave away to China—answered the world with a corporate tax rate of 7 percent or 8 percent. Transnational companies would beat a path back to America’s door.

While globalists might be appalled, why would nationalists give up irrevocably the freedom to act? In the Trump era, a cut in the U.S. corporate tax rate to 21 percent helped to create one of the great booms of the modern era, before the pandemic struck in March 2020. Earlier that year, unemployment in all categories was at record lows.

As Ronald Reagan taught, corporations do not pay taxes; they collect them. They get them out of the revenue they receive from the customers who buy their products and services. The corporate taxes of Ford and General Motors come out of the prices that are charged to buyers of Ford and GM cars and trucks. And the corporate profits are a primary source of higher wages and salaries, bonuses, and the investment capital companies need to grow and create new jobs.

It is an article of faith among Republicans that lower taxes, personal and corporate, generate greater economic activity and prosperity. And that tax hikes are the ways and means by which rapacious governments consume the seed corn of an economy.

A second provision to which the 136 nations agreed is to have the profits of the world’s largest corporations reallocated to the countries where their goods are sold and services are provided, not to the countries where they are located. “Under the agreement,” The New York Times writes, “technology giants like Amazon, Facebook and other big global businesses will be required to pay taxes in countries where their goods or services are sold, even if they have no physical presence there.” Adds the Times: “The separate tax aimed at the technology giants will reallocate more than $125 billion of profits from the home countries of the 100 most profitable firms in the world to the markets where they operate.”

Why would an America First party inside the USA, home country to more tech giants than any other, sign on to a plan that would transfer tax revenue away from the U.S. Treasury into the exchequers of foreign lands?

The GOP should use this moment to re-declare our independence when it comes to our internal taxation on individuals and institutions in the United States, and reassert that we will decide the proper rates here, and not subject to the veto of any other nation. The U.S. is not the EU.