Comply or Die: Vax-Partheid in the Operating Room 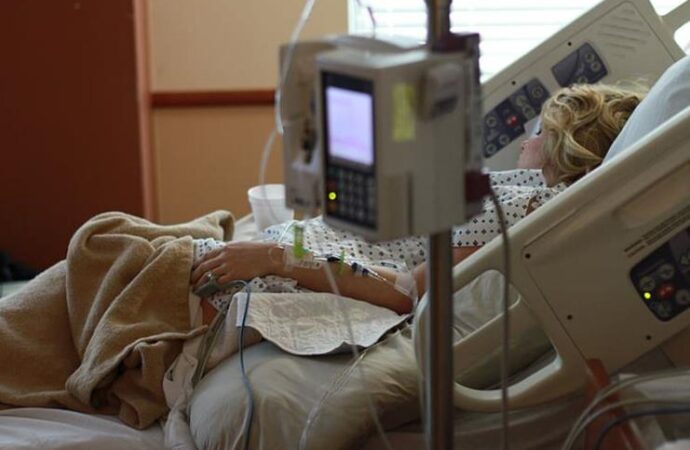 For nearly 20 years, I’ve reported on America’s medical welcome mat for chronically sick illegal aliens. Under a 1986 federal law, “unauthorized immigrants” with conditions such as kidney disease and cancer cannot be denied emergency room care, regardless of their immigration status or inability to pay. Open-borders politicians insist health care is a “right” that every last border-jumper is entitled to—and that every last American taxpayer must subsidize.
According to estimates from 2019 cited in a recent study published by the American Journal of Kidney Disease, there are between 5,500 and nearly 9,000 illegals with kidney failure in the U.S. There’s now a COVID-era push to provide them not only with emergency-room dialysis (at an estimated cost of $400,000 per illegal alien per year) but also with outpatient dialysis under Medicaid. Conveniently, the United Network for Organ Sharing and Organ Procurement and Transplantation Network do not document immigration status, so there are no reliable estimates of exactly how many illegal aliens have received organ transplants in the U.S. At least one scientific journal article identified 400 illegal aliens who had received kidney transplants since 2005—most in California at taxpayer expense.
Keep all this government-backed generosity for illegal alien patients in mind as I tell you about the plight of Leilani Lutali, a law-abiding American citizen and Colorado Springs executive recruiter diagnosed with stage 4 kidney disease last November. Her condition worsened over the summer, leading her to medical providers at UCHealth in Denver to begin discussion of an organ transplant. Blessed with a close-knit network of friends through her local Bible study, Leilani found a living donor in Jaimee Fougner, a former Air Force medic, triathlete and medical assistant who has spent more than two decades in the health care field.
“It was an easy decision to make,” Jaimee reflected. “Why would I not want to save my friend’s life?”
Everything was moving along smoothly until last week, when Jaimee’s donor coordinator at UCHealth asked about her vaccination status. Jaimee is unvaccinated and won a religious exemption from her employer’s jab-or-job mandate. Leilani has already had COVID-19 and told me she recently tested positive for antibodies. Like Jaimee, Leilani has religious objections to the COVID-19 vaccine manufacturers’ use of aborted fetal cells.
Moreover, Leilani told me, “I’m not ‘anti-vax.’ I got my shots as a kid and for business travel. It’s specifically about the COVID shots, which have not been out long enough. There’s no comprehensive data.”
No matter. “Trust the science,” stop asking questions, and comply or die.
Leilani and Jaimee told me they were informed by one of the transplant coordinators that if they didn’t submit to the COVID-19 jab, their transplant “journey would come to an end.” Leilani says they were “told flat-out that there would be no exemptions,” even though UCHealth does allow its own staff to apply for medical and religious waivers. Leilani pushed for alternatives such as a negative COVID-19 test. No go.
Leilani has now been placed on the “inactive” list—a death sentence.
I reached out to UCHealth, whose communications vice president Dan Weaver confirmed in a statement to me that, “In almost all situations, transplant recipients and living donors at UCHealth are now required to be vaccinated against COVID-19 in addition to meeting other health requirements and receiving additional vaccinations.”
Welcome to vax-partheid in the operating room. In their discussions with Leilani and public relations materials sent to me, UCHealth officials have imperiously compared exercising the choice to decline the COVID-19 vaccine to irresponsible behavior such as smoking or drinking before or after an organ transplant. Ridiculous. As Leilani told friends and family in a Facebook post about her plight:
I have done the research on transplant patients and there isn’t substantive evidence that the COVID shot can even provide antibodies to fight off the Delta variant post transplant.
Jaimee adds that the COVID-19 vaccine clinical trials excluded severely immunocompromised patients and a peer-reviewed study in the Journal of Hepatology published in August found “poor antibody response” after COVID-19 vaccination among 61 percent of liver transplant patients and 24 percent of patients with chronic liver disease.
Colorado state Republican Rep. Tim Geitner heard about Leilani’s case and blasted UCHealth’s decision as “disgusting” in a Facebook livestream video (which, of course, has already been appended with the Narrative Control Freaks’ pro-COVID vaccine disclaimers). Leilani’s case “brings great concern for many of us … where based on your vaccination status with COVID, you would actually be denied care.”
Indeed. “Where does this stop?” Jaimee asks. “If it’s OK to deny life-saving transplants to the unvaxed, are cancer patients next?”
Yes, my fellow citizens, we have now arrived at the insane point in America where unlawful immigration status provides more protection than unvaccinated status—and where health care is a taxpayer-subsidized right for indigent illegal aliens, but not faithful, pro-life Christians who stand up against medical tyranny.
“I didn’t want to be the poster child,” Leilani told me Monday. But after much thought and prayer, she came forward to “be a voice for those who have no voice.” All it takes is one to become hundreds, thousands and millions in such a time as this. Who in power will speak for Leilani? Please stand up. The clock is ticking.
COPYRIGHT 2021 CREATORS.COM
—