When Men Say ‘Yes’ to the Dress 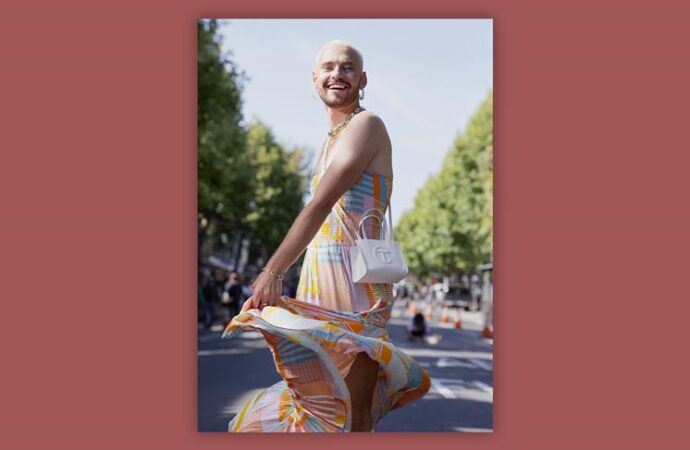 Judging by the ads that show up on my computer, I am a prime target for women’s clothing stores. Advertisers clearly know they can catch my eye with feminine dresses and skirts.
But such feminine dresses quickly become unappealing when worn by those recently featured in a New York Times article entitled “The Boys in Their Summer Dresses.” Displaying an image of a tall, hairy-chested man wearing a strapless sundress accessorized with earrings, necklace, bracelet, and purse, the article discusses the trend of men ditching jeans and t-shirts to sport the skirts and dresses sold in the feminine clothing department.
One might suggest that this trend is simply par for the course in an age of queer, gender-transitioning individuals, and unfortunately they would be right. This time, however, the trend of dress-wearing men isn’t limited to alternative sexualities; it is spreading to heterosexual males, demonstrating that Western society is truly becoming filled with weak men.
The Times cites the example of Eugene Rabkin, noting that while he “pointedly identifies as cisgender and heterosexual” he has been buying women’s clothing for almost 20 years. “To me, there is nothing particularly feminine about them,” the Times quotes Rabkin as saying, and so he shops with his wife, once buying a skirt that she had discarded in the dressing room.
For an average female like myself, such an admission is ghastly, and the image of a man in a dress, sickening. Many of my friends and I are left wondering how we somehow landed in a society where men want to co-opt our sex and the characteristics associated with it. In asking that question, I am led to consider the possibility that my own gender—or rather, the ideology of feminism that supposedly represents it—created this problem with its demand for empowerment and equality.
Once upon a time, our culture embraced the idea of the strong male head of a family, protecting and providing for his wife and children. The idea that men take the lead and women assist them in the journey of life, however, was anathema to feminism, which seemed to believe that the only way to lift women up was to tear men down. Allan Bloom describes this feminist position well in The Closing of the American Mind:
The souls of men—their ambitious, warlike, protective, possessive character—must be dismantled in order to liberate women from their domination. Machismo—the polemical description of maleness or spiritedness, which was the central natural passion in men’s souls in the psychology of the ancients, the passion of attachment and loyalty—was the villain, the source of the difference between the sexes. The feminists were only completing a job begun by Hobbes in his project of taming the harsh elements in the soul.
But feminism didn’t just tear men down. Something needed to fill the void and send men in the other direction. Bloom lays out the plan:
With machismo discredited, the positive task is to make men caring, sensitive, even nurturing, to fit the restructured family. Thus once again men must be re-educated according to an abstract project. They must accept the ‘feminine elements’ in their nature. A host of Dustin Hoffman and Meryl Streep types invade the schools, popular psychology, TV and the movies, making the project respectable. Men tend to undergo this re-education somewhat sullenly but studiously, in order to avoid the opprobrium of the sexist label and to keep peace with their wives and girlfriends. And it is indeed possible to soften men.
The sight of men sashaying their way down the street in sundresses seems to suggest feminism has indeed succeeded in softening men. But even if men manage to resist these softening efforts, the lure of the feminine arises in other places, particularly the increasing special preferences given to women and minorities in every area of life. Such preferences leave men, particularly white males, on the sidelines. There is nothing they can do to get ahead—except to throw up their hands and join the ranks of the feminine.
Given this, perhaps the cross-dressing trend shouldn’t surprise us. But just because it’s happening doesn’t mean we have to accept it, nor does it mean we cannot push back.
If women want men to leave the femininity to them, then women are going to have to reclaim it. Feminism has often taught women to reject their femininity, to adopt the aggressive, macho stance that men have been told to abandon. We’ve been told to leave the home behind, take the lead in the corporate world, and look the part by donning menswear and rejecting children.
Why not do the opposite? Women can readopt the gentle, caring nature that was once solely their domain. They can buck the trend and rediscover the delight of children and the joys of homemaking. They can even embrace feminine dressing, glorying in the skirts that men have somehow convinced themselves are a cool, masculine look.
We live in a crazy, messed-up world where men are weak and dress like women, and women are brash and dress like men. Many of us are absolutely sick of this upside-down scenario. Turning our world right side up starts with members of each gender re-embracing the traditional roles and practices of their respective sexes.
—
This article was originally published in Chronicles Magazine.