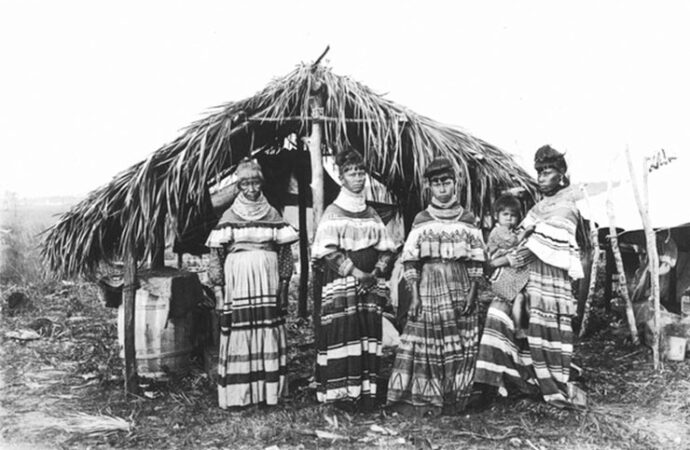 Despite repeated claims to the contrary by American elites, slavery is not a uniquely American, or even a uniquely white enterprise. Peoples of all nations and colors have engaged in the institution throughout history. One such example is easily found in the compelling history of the Seminole people.

Joseph Cotto, of Cotto/Gottfried podcast fame, has self-published an excellent study of the Seminole Indians and their desperate efforts to hold on to their tribal lands in Florida. The title that Cotto has bestowed on his highly readable, methodically researched monograph is Runaway Masters: A True Story of Slavery, Triumph, and Tragedy Beyond 1619 and 1776.

Cotto’s title is meant to be ironic. The name Seminole is derived from a word meaning “runaway,” but the Seminoles enjoyed the status of masters since they acquired thousands of slaves, an indisputable fact Wikipedia conveniently fails to mention. Seminoles obtained their black slaves from plantations run by American settlers. Some of these slaves had run away, while others may have come from Seminole raids. The way the Indians took possession of them undoubtedly created additional tensions between the Seminoles and white Floridians.

The Seminoles, according to Cotto, did not exactly view slaves as their equals. Indeed, they made them live in their own settlements apart from tribal members. Ethnic Seminoles and “Black Seminoles” descended from slaves still maintain separate settlements even on Indian reservations in Florida. But, unlike those slaves who lived on the plantations of white Americans, the Seminole slaves were not deployed for labor-intensive agricultural tasks. Instead they were taught to do what their Native American masters did: to hunt, fish, and fight against the white enemy. Many of these black slaves accompanied the Seminoles on their trek out West. Even after slavery was abolished in the United States, many Black Seminoles remained with the Indian tribe that had held them as slaves. As late as 1900 there were still 10,000 freedmen or their descendants identifying with the Seminoles. Most of these freedmen in Oklahoma ended up on the same reservation as the ethnic Seminoles, where the federal government placed them after the Civil War.

Despite the existence of these Black Seminoles, the tribe sided with the Confederacy in the Civil War since the Confederates promised to restore their tribal lands. This alliance was primarily based on shared interests outside of the fact that Southern whites and Seminoles both owned slaves. In any case it was only in the West that Seminoles won victories against the Union forces. There they fought alongside the Confederates until the war was lost and, like the defeated Southerners, they were treated as conquered enemies.

Cotto’s narrative tells us how the Seminoles, a branch of the Creeks, established control over what became the state of Florida, after running away from their Creek kinsfolk. For more than a century they held their ground against the Spanish and British owners of the Florida territory, but after the Americans purchased the area and made Florida a state in 1819, the enraged Seminoles went to war against the American occupants who tried to drive them off their tribal land. For almost ten years starting in 1834, American settlers and the Seminoles were entangled in continuing strife; and it was only through deceit that the American army captured Osceola, the most effective leader of the Seminole.

Cotto shows how the Seminoles, after being ordered to move West into Arkansas and the Oklahoma territory, continued their resistance in Florida as well as on the lands West of the Mississippi. Part of the tribe managed to stay in Florida, where about 4,000 self-identified Seminoles still reside, compared with the roughtly 19,000 presently settled in Oklahoma. A third Seminole War broke out in 1855. (The first one erupted in the early nineteenth century along the Florida-Georgia frontier, while a second one, led by Osceola, followed in the 1830s.) In this third war the Seminoles were driven out of most of the arable land in Central Florida into what Cotto describes as “the Big Cypress Swamp, in the Everglades between present-day Miami and Naples.” Since this swampland was of no interest to American pioneers, “Uncle Sam let this handful of Seminoles be.”

Until 1866 the federal government refused to negotiate a treaty with the Seminoles that would recognize their possession of the Western lands they had been assigned. The Black Seminoles who were the progeny of slaves fared slightly better. Unlike ethnic Seminoles, they were allowed to sell property and were more likely to seek better living conditions outside of reservations. For the ethnic Seminoles by contrast, as Cotto suggests in his subtitle, there would be no redress for their stark living conditions. Unlike the blacks, they could not effectively appeal to 1619 or 1776 as an initial transgression suffered or as a promise made but not kept. The one source of honor or consolation left to the Seminoles at least in Florida was that they had never surrendered to the white settlers.