In the months before COVID hit, a number of my friends began a new phase of motherhood by starting careers as homeschool teachers. They expressed normal trepidation, concerned they would fail, and by extension, their children would.

Then the pandemic hit, homeschooling became the new way of life, and my friends were suddenly homeschool veterans, all settled in and progressing with their curriculum while everyone else scrambled to get their act together. I now hear a sigh of relief and an eager “Yes!” when I ask them if they’re glad they’re homeschooling.

They’re not the only ones. Recent data shows that as much as 11 percent of the population is homeschooling since COVID-19 hit. Bad news abounds these days, but the soaring success of homeschooling is a silver lining in the clouds of COVID and chaos, suggesting we may have reached a new tipping point.

Unfortunately, many try to tell us otherwise, as is the case in a recent National Review article by Sean-Michael Pigeon entitled “Homeschooling Can’t Be for Everyone.” Yet the idea that homeschooling cannot be a prominent part of the answer to America’s educational crisis is misguided.

Pigeon argues that homeschooling on a larger scale is unworkable because of the costs and sacrifices required. “More affluent families,” he says, “may not want to dramatically decrease their standard of living by cutting off an income stream” while others “simply won’t want to take on the task of personally educating their children.” With the increased ability of parents to work from home, and the proliferation of pandemic pods, the barrier to entry for homeschooling has fallen significantly. Besides, just because a family doesn’t want to live on a reduced income or doesn’t want to spend time educating their children doesn’t mean that it can’t be done. It all depends on where you decide to put your time, talent, and treasure.

The most interesting critique Pigeon offers of homeschooling concerns how bad ideologies will continue to proliferate in schools if parents don’t push back, and how a mass exodus of students from conservative families from the public school system will accelerate our cultural decline.

It is here that it’s helpful to consider the concept of tipping points. “Scientists have found that when just 10 percent of the population holds an unshakable belief, their belief will always be adopted by the majority of the society,” researchers at Rensselaer Polytechnic Institute reported in a 2011 study. The author Malcolm Gladwell has also explored this phenomenon in his book published in 2000, The Tipping Point. 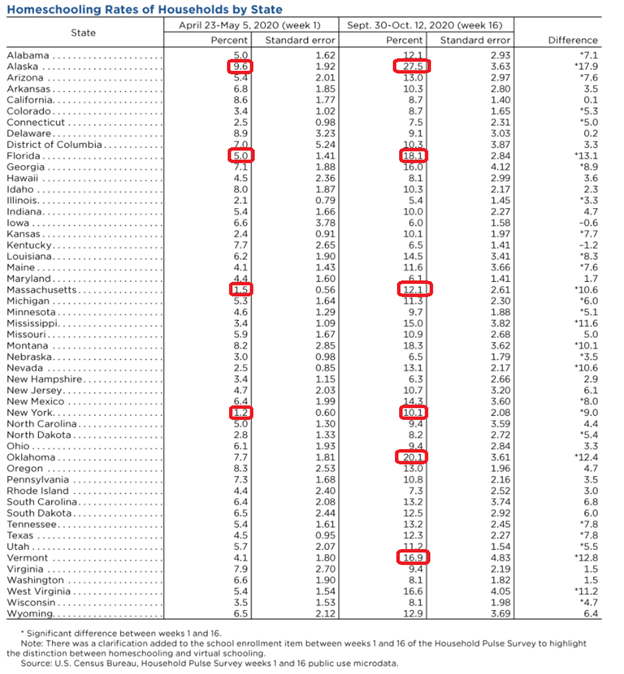 But it’s not just red states that are jumping into the homeschooling game. Predictably blue Vermont saw its homeschooling rate rise from 4.1 percent to almost 17 percent. New York’s rate rose from 1.2 percent to 10.1 percent, while Massachusetts grew from 1.5 percent to 12.1 percent.

If we have achieved the tipping point so quickly, who is to say the homeschooling rate can’t grow further in the next few years? And if it does grow more, who is to place limits on it in terms of its ability to change students’ ways of thinking, and the education system as a whole?

Some may say such change is a pipe dream. But those who say this are forgetting that homeschooling does a great deal to develop strong families, fostered through increased togetherness. It is this strengthening of the family that will be the commonality around which the tipping point is created; the family, one of Edmund Burke’s “little platoons,” can achieve great things in changing the course of a country.

“To be attached to the subdivision, to love the little platoon we belong to in society,” Burke said, “is the first principle (the germ as it were) of public affections. It is the first link in the series by which we proceed towards a love to our country, and to mankind.”

If you’re discouraged about the course of the country, perhaps this silver lining in the growth of homeschooling will give you cause to take heart. It’s always darkest before the dawn. We’re about to see the light arise as thousands of American families abandon the public education system and rediscover learning and family at the same time.