Seventy Years Old and an NBA Star (in My Mind) 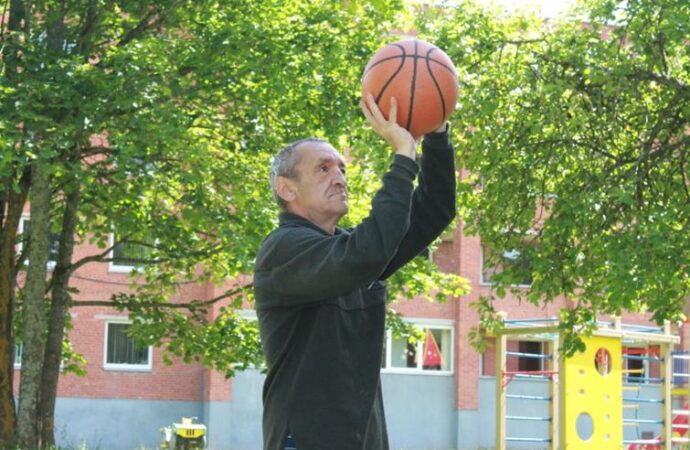 I’m 70 years old, 5’7”, and a bit past my ideal measurement on the Body Mass Index. Let’s say I wake up tomorrow morning, look at myself in the mirror, and suddenly decide I’m capable of hitting three pointers in the National Basketball Association. I see myself soaring through the air like Michael Jordan, ball in the palm of my hand, dropping another layup through the net.

Now let’s say I insist that everyone else see me this way as well and that I’m dead-serious about this proposition. I demand my family and friends begin calling me “Big Man,” I talk continually of what I could do on the court, buy a Chicago Bulls outfit, and wear it around town, dribbling a basketball down Jackson Street and into the coffee shop.

Would you address me as “Big Man” and ask me how last night’s game went? If your answer is yes, then you are a linguistic realist.

A linguistic realist believes words and feelings define objects. They believe each one of us has the ability—or rather, the right—to define reality as we wish.

I thought about linguistic realism while discussing Robert Curry’s Reclaiming Common Sense: Finding Truth in a Post Truth World with a friend recently. I opened it at random to the chapter “Imposing an Alternative to Common Sense” and found this quotefrom Bruce Fleming’s “Dogma of the Day:”

The dogma of the intellectual upper classes today is a bedrock belief in what I call ‘linguistic realism’…If I say I am a woman, I am a woman, whatever others think. If I say I feel myself to be oppressed, I am. If I say that I was the victim of what we call sexual assault, I am—even if a court later decides there was no assault and hence no victim.

Curry spends only four pages discussing “linguistic realism,” but that quotation and Curry’s brief examination of this attitude’s consequences help explain the mess our country is in and the divisions created by language usage. Most Americans, as Curry tells us, are common sense realists. They are men, women, and even children who know in their bones the differences between men and women, the purpose of borders, and the true meaning of oppression.

Our elites are different. Curry again cites Bruce Fleming: “The basis of linguistic realism is the rejection of words as a means, and the acceptance of them, and other forms of representation, as an end in themselves.”

Thus, in our basketball example above, a common sense realist who cared about my welfare might douse me with a pitcher of cold water, arrange for me to see a therapist, have me committed, or simply accept me as that nutty old guy who finally hopped into an inner tube and plunged over Niagara Falls.

A linguistic realist would ask me to autograph his basketball.

We’ve indulged in linguistic realism for decades now, often through euphemism. “Collateral damage” refers to civilians we’ve killed or wounded in war. “Enhanced interrogation” means some form of torture. “Underprivileged” or “poverty-stricken”  people were once called poor. “Hate speech” is a term we apply to the rhetoric of those who disagree with us. “Illegal aliens” has given way to “undocumented immigrants.” We “put to sleep” our pets and “fix” our dogs and cats. (Who knew they were broken?)

Here’s one of my many favorites. An AARP article advises that instead of calling men and women “old,” we should refer to them as sages or wizards because “if you have lived past 45, are a halfway decent person and not cruel or mean, then yes, you are magical.”

I’ve known plenty of people who fit this description, including myself, and believe me, we aren’t magical. A warning here: call me a wizard, and my glass of chardonnay will go from my lips to your face.

In the last few years, linguistic realists have run amuck. Riots have become “largely peaceful protests.” Some now regard conservatives as “terrorists.” The Biden administration replaced mothers with “birthing people.” In some places, we now allow men and women to select their bathrooms or spas depending on their “gender identity.” Personal preferences trump chromosome and the laws of nature.

This application of linguistic realism comes with grave consequences, particularly in the online world. Use the wrong gender pronoun, and you may be banned from social media. Critique some new fashionable moniker like “critical race theory” or “Black Lives Matter,” and you will either be ghosted or savaged by an online mob. Defend common sense realism, and you may find yourself booted off Twitter or Facebook with little explanation.

In Boswell’s Life of Johnson we have this exchange that sums up Curry’s argument for common sense:

After we came out of the church, we stood talking for some time together of Bishop Berkeley’s ingenious sophistry to prove the non-existence of matter, and that every thing in the universe is merely ideal. I observed, that though we are satisfied his doctrine is not true, it is impossible to refute it. I never shall forget the alacrity with which Johnson answered, striking his foot with mighty force against a large stone, till he rebounded from it – ‘I refute it THUS.’

Linguistic realism? Out of frustration, I just now kicked the concrete steps of my front porch and darn near broke my toe.

But I refute it thus.