Italian Soccer Champs Are a Triumph of Manly Nationhood 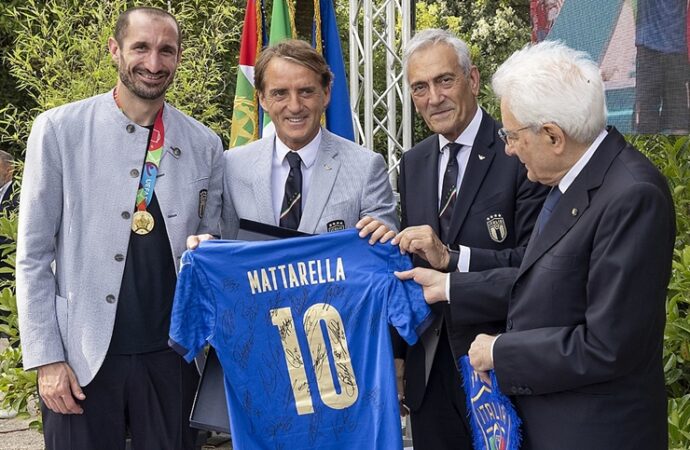 There are at least three reasons why I rejoiced, together with some sixty million Italians spread all over the world, at their soccer team’s victory over England in the 2020 European Championship finals.

First and foremost, the winning Italian team was almost entirely composed of those who are Italian by blood and heritage: here they are, proudly and enthusiastically singing their national anthem earlier in the championship. This is a band of true brothers, the Fratelli d’Italia (shown here celebrating on the way back to Rome). These are real men—no LGBTQ+ types here—who cherish the same native soil which has produced one of the greatest civilizations known to mankind.

Even the BBC, the leading organ of political correctitude in the Anglosphere, somewhat grudgingly admitted that “brotherhood is the very theme of this Italian side.” By growing together and facing challenges as a unit, they forged bonds, memories, and stories that enthralled their nation.

No commentator in a mainstream medium will dare say so aloud, but millions of Italians are well aware that the true strength of their team is in its monolithic monoculturality. It is unabashedly monoethnic, eminently masculine in its players’ appearance and behavior, and viscerally patriotic.(Compare and contrast this team with France’s utterly failed squad: if “diversity is strength,” then France should have won the championship.)

Secondly, the scenes of genuine nationalist joy, in Rome and everywhere else, from Milan—the Lombard capital—to Sicily, show that there are many Europeans—especially among the young—who retain their identities as distinct peoples. Their loyalties are not global, or “European” á la Bruxelles via the European Union. They are not guilt-ridden, they do not give a hoot for microaggressions, systemic racism, safe spaces, etc. Most assuredly they will not destroy the monuments to Machiavelli or Garibaldi. They will not cave in to the new Leader of All Progressive Humanity, the Kremlin on the Potomac.

The third reason for joy is that Italy has beaten England, the team that took a collective knee at the tournament. That team adequately represents not just Albion’s civilizational decrepitude, but also the virus of self-hate which now emanates from the global Anglosphere. Those spectators who dared boo them for their political action were officially described as racist idiots.

The England team is the symbolic and literal enemy of truth, beauty, and goodness. Its defeat and Italy’s victory is a great and glorious event.