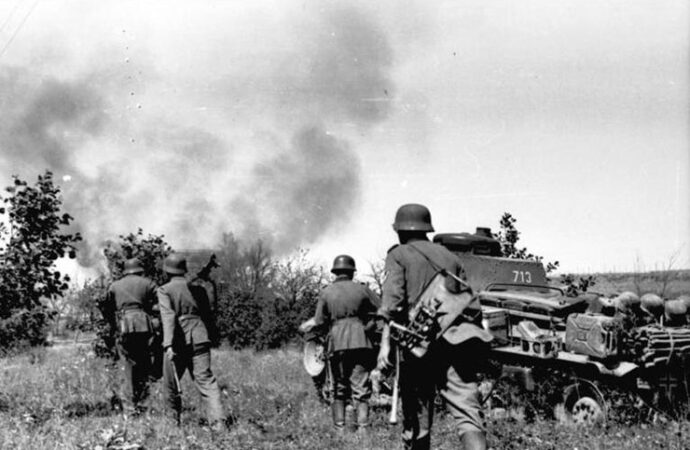 Hitler’s Germany attacked Stalin’s Soviet Union 80 years ago today, thus unleashing the greatest, bloodiest, and most meaningless clash of titans in history. Thanks to the German Führer’s obsession with Lebensraum (“Living Space”) in the East, and his equally self-defeating, criminal race theory,  Operation Barbarossa resulted in the mutual near-destruction of the two nations.

Flawed from the outset, Hitler’s plan was underpowered. Its three million men, 600,000 vehicles and 600,000 horses advancing in three columns—north, center, and south—were woefully inadequate for a systematic advance into the vastness of Russia’s European heartland. On paper this force looked formidable, arguably the most lethal attacking army ever assembled. Spread over a 3,000-kilometer front of poorly interconnected space and roads which turned into mud after the first autumn rain, their plan fizzled out by early December 1941.

Hitler defied all lessons of  warfare developed by Karl von Clausewitz: Define your principal target, do not deviate from it, and do not divide your forces. Contrary to these maxims and to the advice of his generals, who wanted to remain focused on Moscow, Hitler wavered on the focus of the attack. In September 1941 he weakened the Army Group Center, which was advancing on Moscow, in order to encircle a hapless Soviet force in and around Kiev, which presented no threat whatsoever to the advance of German forces on the Russian capital. The result was a spectacular capture of over half a million prisoners—most of whom later starved in prison camps—and the inability of the German army to reach the capital before the bitter Russian winter set in.

By that time German forces had suffered over a million casualties. The Soviet Union was only beginning to awaken its industrial and military potential, not least by Stalin’s astute appeal to Russian patriotism and by his edict to reopen the churches he had previously shuttered, following the Nazis decision to do the same. To a reasonable analyst it was clear that Germany was doomed as early as December 1941, irrevocably so after it declared war on the United States shortly after the Pearl Harbor attack.

By the end of 1941 the strategic initiative in the East was lost forever. The Blitzkrieg technique which worked against Poland, Norway, and the Low Countries fizzled out in Russia and the game was over. The Reich managed to fight on bitterly for several years, but only by enduring supreme, yet futile, sacrifices along the ever-tightening fronts outside its borders, and by trying to defend the cities—many of them wantonly and criminally destroyed—at home.

Germany’s propaganda minister Joseph Goebbels and the Nazi Party’s chief ideologue, Russian-born Alfred Rosenberg, both advised that Barbarossa should be presented to the denizens of conquered territories as an international anti-communist crusade to liberate the oppressed masses of Russia, Ukraine, Belarus, and all other smaller communities along the way. Hitler would have none of that. In line with his early obsessions stated in Mein Kampf (1923), he wanted Barbarossa to be a war of cruel annihilation or enslavement of the Slavic natives, which he viewed as racially inferior to the Germans. The result was truly horrid: more than 10 million dead Slavic and other civilians.

Germany was doomed because Hitler was blinded by his own ideological blinkers and did not listen to Goebbels and Rosenberg. In trying to subjugate Russia, he managed to repeat all of the mistakes committed by the Teutonic Knights, the Swedes, the Poles, the French, and the Central Powers over the centuries. Such arrogance—which shows contempt for the historical record—defies belief but offers hope that the deeply anti-American, antihuman neoconservative and neoliberal bid for global dominance will meet a similar sticky end, to every decent person’s benefit and delight.

In broader terms, the Third Reich was a great power devoid of grand strategy. Until the attack on the Soviet Union, Hitler was a successful opportunist who achieved a host of bloodless or cheap victories; thereafter he turned into a doomed dilettante. Conquering an unconquerable eastern Lebensraum while murdering and enslaving millions of people in the process was not a grand strategy. It was a nihilistic vision of a grim world of Teutonic dominance doomed to failure.

It is therefore ironic that “geopolitics” is still occasionally claimed to have inspired Hitler. His apocalyptic vision of the Rassenkampf (race struggle) and his brutal expansion into the Slavic-inhabited East was the exact opposite of a great continental Berlin-Moscow-Tokyo axis which was advocated by Karl Haushofer, the leading Weimarian geopolitical thinker of the 1920s, let alone Carl Schmitt, the greatest German thinker of the 20th century. The Nazis used geopolitical terminology without understanding geopolitics, just as Karl Marx used economic terminology without understanding economics.

Carl Schmitt’s membership in the Nazi Party did not prevent him from warning against the ideological blinkers which evidently guided the Reich to ruin. First published in 1942, at the height of the war, his Land and Sea: A World-Historical Meditation recounted Schmitt’s view of world history “as a history of the battles of sea powers against land powers and of land powers against sea powers.” To Schmitt, just like to Haushofer, Britain and America—the paradigmatic sea powers—were the natural and mortal enemies of Germany, and Russia its natural ally. That simple verdict remains valid to this day.

Update: The Low Countries has been added to the list of nations in the fifth paragraph which endured Hitler’s Blitzkrieg.