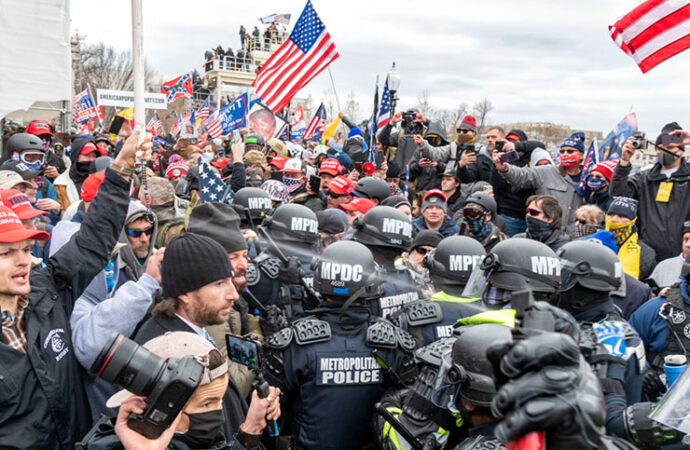 Joseph Bolanos’ reputation as a pillar of New York City’s Upper West Side community was shredded in February when FBI agents and heavily armed police raided his mother’s apartment where Bolanos was spending the night. They handcuffed him while other agents battered down the door to his home and kept him in the street in full view of the neighbors while they ransacked both apartments.

During this raid Bolanos suffered a stroke—the first of two caused by the stress of this gross miscarriage of justice. The reason for this federal assault was that Bolanos, a registered Democrat, had attended part of the Trump rally on Jan. 6 in Washington, D.C. He and his friends never went inside the Capitol Building, but a neighbor overheard him talking about the rally and alerted the Feds.

Bolanos was one of more than 500 people arrested for their activities during the January breach of the Capitol, and the numbers continue to grow. These ongoing arrests, the reputations they have destroyed, and the absurd and excessive force used to take people like Bolanos into custody should raise some frightening questions about the state of freedom in America. It is horrifying that our federal government has unleashed FBI agents and police on American citizens in ways so closely resembling the tactics of Communist China.

Miranda Devine tells the sickening story of the 69-year-old Bolanos’s arrest in a piece for the New York Post. Before the arrest, Bolanos was known in his neighborhood for his care of his 94-year-old mother and for often helping out his neighbors. He became a Red Cross volunteer after the 9/11 attacks and even received a commendation from the police after rescuing a woman from a mugger.

Though he was never charged with a crime, the neighbors who once regarded Bolanos as a lovable character and an asset to the neighborhood now shun him as a domestic terrorist.

Now let’s head south to Florida, where police last week arrested 73-year-old pastor and Vietnam War veteran James Cusick for being inside the Capitol building during the riot. As reported by Gateway Pundit’s Cassandra Fairbanks, Cusick claims no one told him not to enter the building, and the police with whom he chatted even directed him to a bathroom. (Anyone who was in Washington for this rally knows how few portable toilets the city provided for the hundreds of thousands of attendees.)

The police also took into custody Cusick’s son and one of Cusick’s friends, both of whom had also attended the rally. When Cusick’s daughter asked the officers why they were arresting her father, the police seemed embarrassed and answered they were only doing their job.

The federal government is still holding many of those who participated in the Jan. 6 protests in solitary confinement in a Washington jail months after the event, with no trial in sight. Not only are they still imprisoned, they are being put through reeducation camps. Julie Kelly, reporting for American Greatness, writes of court-appointed lawyers pushing anti-American propaganda on their clients, with whom they have many political disagreements.

And what of those protesters on the political left, who rioted over the last year, burning buildings, smashing windows, looting stores, and attacking both innocent bystanders and police in cities across the United States? Many of those arrested were never tried and were released without bail. In New York City, for example, hundreds who participated in riots there a year ago have had their charges dropped. The District Attorney’s office claims they are overwhelmed by a backlog of cases from the lengthy closure of the courts during the pandemic.

We should be outraged by this discrepancy in treatment, and what it reveals about the corruption within the Department of Justice, the FBI, and other branches of our law enforcement. What sort of government treats its citizens so despicably? One might also ask why those who actually committed violent acts of arson, looting, and assaults aren’t facing similar consequences. Furthermore, why aren’t our elected representatives doing more to rectify this situation? Who’s really in charge of our government?

We expect to find such blatant injustice in places like Communist China, Cuba, Venezuela, certain nations in the Middle East and Africa, and some other countries around the world. But in the United States of America?

Whatever one’s political persuasion—conservative, liberal, progressive, libertarian—these raids and arrests should frighten and anger all Americans. If the authorities can arrest and abuse good citizens like Bolanos and Cusick while allowing real rioters to go free, they can do the same to the rest of us.

Sooner or later, the foot soldiers in law enforcement who are conducting these raids and making these arrests need to wake up. “I’m just doing my job” applies when you’re arresting real criminals, but it’s also the watchword of fascists and communists.

It is time for all of us to wake up.